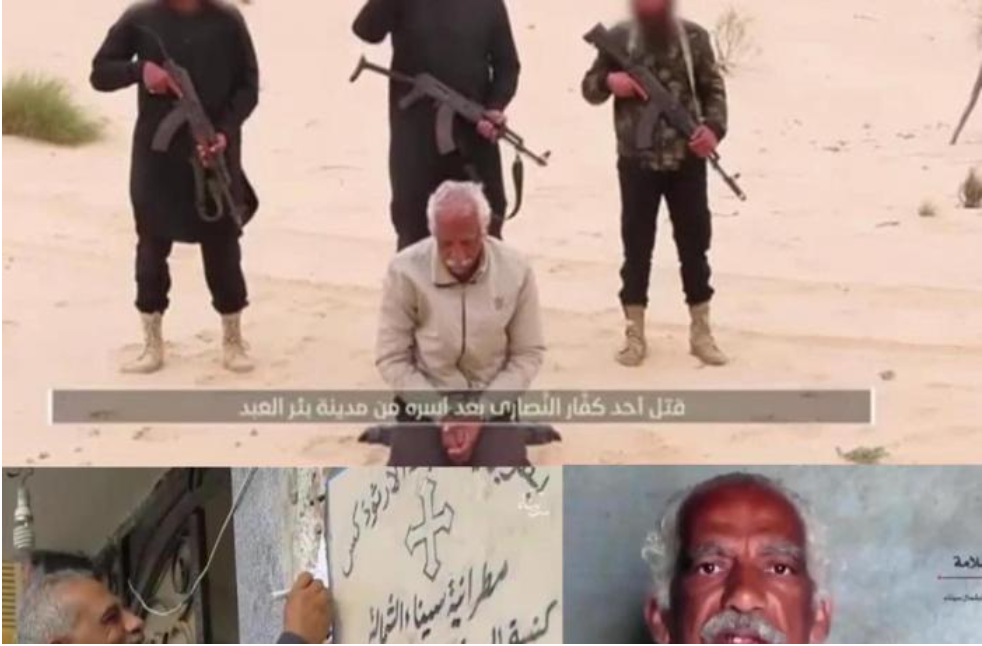 Nabil Habashi Khadim, 62, was an esteemed merchant and philanthropist. He was kidnapped on 8 November last and killed with a Kalashnikov shot to the head. His murder was posted online by the jihadist movement who accused him of having contributed to the construction of the only Christian place of worship in Bir Al-Abd.

AsiaNews (19.04.2021) – https://bit.ly/3n1IATG – The Islamic State (IS, formerly Isis) has executed an Egyptian Orthodox Coptic Christian, killing him with a bullet to the head in an execution filmed and posted online yesterday on the jihadist group social channels and shared by numerous users and platforms.

The victim, already considered a “new martyr” by the country’s Orthodox, is an esteemed intellectual and businessman: 62 year-old Nabil Habashi Khadim who was kidnapped on November 8 in the city of Bir Al-Abd, in northern Sinai. In the video he is seen being shot in the head with a Kalashnikov while kneeling on the ground.

Local sources report that the man had contributed to the construction of the only Christian place of worship in the city, the church of the Madonna dell’Anba Karras (Our Lady). This is also one of the reasons that led the jihadist commando to kidnap him.

In the video, one of the executioners belonging to the local Daesh cell (Arabic acronym for IS) explicitly accuses the man of having contributed, even financially, to the construction of the church just before pulling the trigger and executing him. The jihadist group also accuses the Church of “collaboration” with the Egyptian army, police and secret services.

Still others link the timing of the killing to the upcoming Easter holidays, which fall on May 2 for the Coptic Orthodox.

Witnesses say that Nabil Habashi Khadim, the latest in a “long line of North Sinai martyrs” was an esteemed jeweller from the city of Bir Al-Abd. His family is considered to be among the oldest in the Coptic community in the area, very active in the gold trade as well as owning a clothing store and a cell phone resale business.

On 8 November a group of men, armed but in civilian clothes, kidnapped him on the street in front of his house and fled undisturbed. In all these months the searches of the police and the appeals of the family for his release have been in vain.

His death caused grief and emotion in the Egyptian Coptic community, whose leader Pope Tawadros II issued a stark condemnation and asked for prayers for the man “kidnapped by Takfiri elements in North Sinai five months ago and subsequently martyred”.

The Church, continues the note, “weeps for a son and a faithful servant” who is now in the heavenly glory of Christ for having “testified to his faith even to the sacrifice of blood”. The declaration concludes by confirming the support of the Coptic Orthodox community “for the efforts of the Egyptian state” to counter “these hateful acts of terrorism” and “to preserve our dear national unity” for a “future of peace and prosperity”.

Islamic extremist groups have been fighting for years in northern Sinai, which intensified following the overthrow of President Mohamed Morsi in 2013 and the rise of the Islamic State in the region the following year. Several Christians have also been targeted, killed in attacks against individuals and groups of faithful.

In February 2018, the Egyptian security forces, the army and the police launched a massive campaign against armed groups and jihadists, with particular attention to the North Sinai area.

In just over two years, more than 840 terror suspects and over 60 soldiers have been killed.