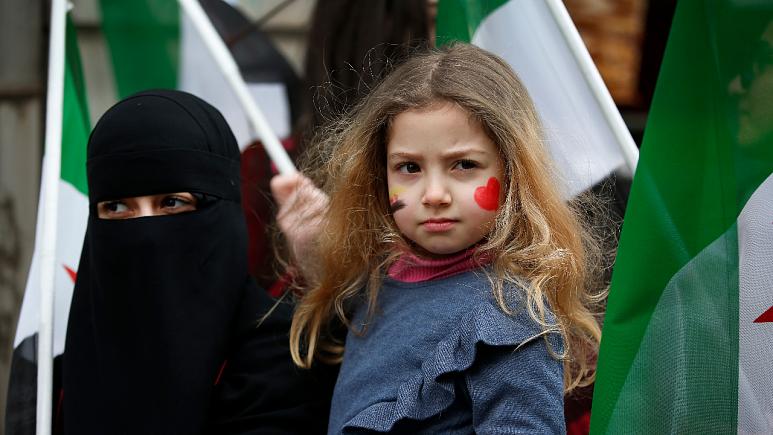 Euronews (21.04.2021) – https://bit.ly/3xf0dEq – Danish authorities have been accused of putting the futures of dozens of refugee children at risk by threatening to expel them to Syria, despite warnings that it is not safe to do so.

In a statement released on Wednesday, children’s rights group Save the Children said it was “deeply concerned” to discover that at least 70 refugee children are at risk of being expelled to Syria.

Denmark sparked outcry after it announced plans to strip Syrian refugees from Damascus of temporary protections allowing them to stay in the country after officials determined that it was safe for them to return home due to the security situation in parts of Syria having “improved” significantly.

The move comes following a report last year in which the government said “the conditions in Damascus in Syria are no longer so serious that there are grounds for granting or extending temporary residence permits”.

As a result of the decision, hundreds of Syrian refugees from the region are at risk of losing their residency permits, which would likely force them to return home to a country that has been embroiled in conflict for the past decade.

Speaking with Euronews on Wednesday, Amjad Yamin, Advocacy, Media and Communications Director at Save the Children’s Syria office, said the organisation was aware of at least 70 children who are awaiting on a final decision on whether or not they lose their rights to stay in Denmark.

If their rejections are confirmed, they and their family members would have to make plans with Danish authorities to return to Syria or they could be placed in departure centres for an indefinite period, he said.

Yamin said he did not understand Denmark’s justification for potentially sending children back to Syria. However, he said he believed it is a decision the country has been “itching to make for some time”.

“A lot of countries have been generous for a long time,” Yamin said. However, he asserted: “Syria is not a place that children should be sent back to…This is not the time to start pushing people to return”.

In a separate statement provided by Save the Children, Anne Margrethe Rasmussen, the organisation’s Denmark Area Representative for the Middle East and North Africa (MENA) region, said that if children were forced to return to Syria, they would be going back to a “country they hardly remember, a country that is still not safe”.

“Children, who have no responsibility for the devastating conflict in Syria, are yet again victims of a crisis created by adults. Many of them will have never known a peaceful Syria, which has been steeped in conflict for more than ten years now,” Rasmussen said.

Most children ‘do not see future’ in Syria

Indeed, in a recent research campaign, Save the Children spoke to more than 1,900 children and caregivers in Syria, Jordan, Lebanon, Turkey and the Netherlands and found that the “vast majority” of children said they did not see a future in Syria after ten years of conflict.

Of those questioned, 86% of Syrian refugee children in the above countries said they did not want to return to “the country of their parents”.

Even among those polled within Syria, one in three said they would rather be elsewhere.

While Rasmussen said that sending children to Syria would put their safety at risk, she also said that placing children in departure centres in what she branded an effort to “push their parents to leave the country” would also “deeply impact their mental wellbeing and development”.

“Syrian children have the right to feel safe and they should not live in fear of being forced to flee again,” she said.

At this point, Save the Children’s Syria Response Director Sonia Khush said it is still too soon to deem “any part of Syria” safe.

“Such an argument is not in line with international standards and does not reflect the reality on the ground. It fails to take into account the risks of arbitrary arrests and flare-ups of violence. It ignores the fact that many houses are destroyed, access to education is limited at best and the health system is overwhelmed,” she said.

Yamin told Euronews that the coronavirus pandemic was also a cause for concern, noting the recent surge in cases over the past month.

“So, how do you send children back to that situation? To hunger, poverty, death, COVID and no school… It is very concerning if they are sent back,” he said.

In a recent statement published by Human Rights Watch, experts on the situation in Syria joined in condemning the Danish government’s decision to remove protections for Syrian refugees from Damascus.

“We believe that conditions do not presently exist anywhere in Syria for safe returns and any return must be voluntary, safe, and dignified, as the EU and UNHCR have clearly stated,” the coalition of experts, including Ammar Hamou of Syria Direct, Bente Scheller of the Heinrich Boell Foundation, Sara Kayyali of Human Rights Watch and Suhail al-Ghazi, a Syrian researcher and non-resident fellow at the Tahrir Institute for Middle East Policy, said in their statement.

They called on the Danish authorities to follow a position that was outlined in last month’s European Parliament resolution, which reminded all member states that “Syria is not a safe country to return to”.

“Denmark was the first country to sign up to the Refugee Convention in 1951. It is now setting a dangerous precedent by effectively taking the first step to send people back to a place that is far from safe,” Khush said.

“Most Syrian children do not even see a future in the country,” she said. “Put simply, Syria is not ready for refugees to return and most children don’t want to be there. The Danish authorities should listen to them.”