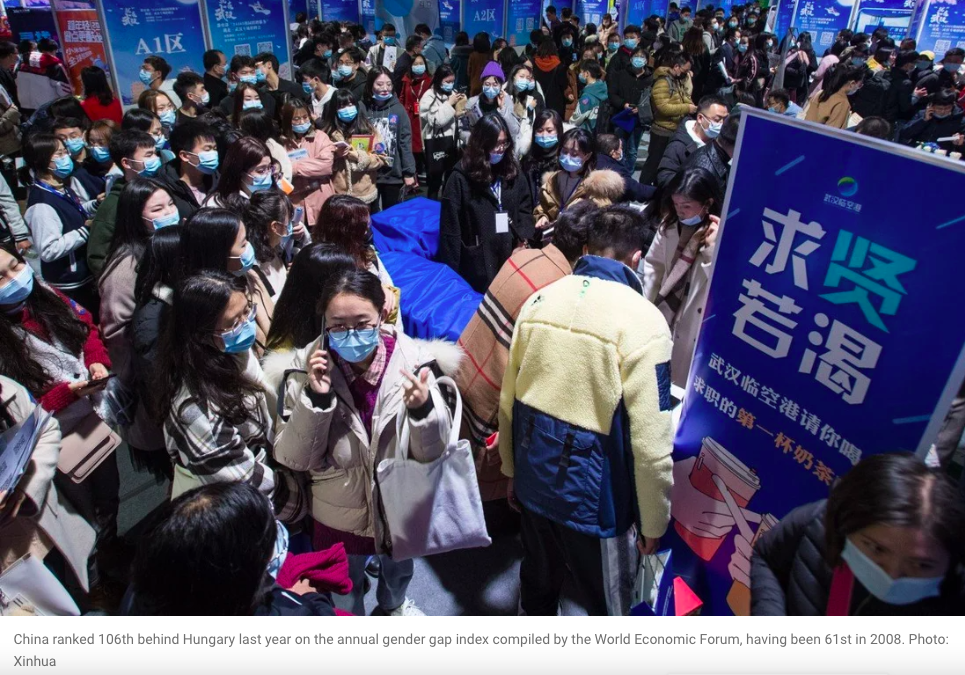 China’s birth rate is declining so Beijing is encouraging couples to have more children, but employers are worried about extra maternity costs. China still exceeds the global average participation rate for women in the workplace at 60 per cent in 2019, but the rate has been falling since 1990.

South China Morning Post (09.01.2021) – https://bit.ly/2LnTS6k – China’s ongoing battle to boost its population is having a knock-on effect on its efforts to ensure gender equality in the workplace, with female applicants increasingly being told they are unsuitable for roles for “unsubstantiated” reasons, including because the role required overtime work, business trips, driving or even moving books.

“These excuses are so unsubstantiated. Overtime and business trips have nothing to do with gender. It’s up to your abilities and tolerance. It can not persuade us at all,” said Helen Tang, who has been battling gender equality while claiming to be the victim of discriminatory practices since 2018.

China has been struggling with a declining birth rate in recent years and so is encouraging couples to have more children. But with employers worried about maternity costs, discrimination, at least recently, has been rising, particularly since Beijing officially ended its one-child policy in 2016.

While China exceeds the global average participation rate for women in the workplace of 47 per cent with 60 per cent in 2019, the rate has fallen by more than 12 percentage points since 1990, according to the United Nations-backed International Labour Organization.

The gap between male and female labour participation rates in China expanded from 11.6 percentage points to 14.8 percentage points between 1990 and 2019, while it has been shrinking in major economies during the same period.

“I am puzzled. I don’t understand why a clerk role is only offered to men,” added Tang, who was told male applicants would be prioritised when she called to inquire about the position.

Her treatment saw Tang reach out to Workplace Gender Equality Watch, an informal social media group, and discovered that the problem was more prevalent than she first feared. She later volunteered to work for the organisation.

Founded in 2014, the group is made up of more than 50 part-time volunteers who regularly highlight on social media hiring practises that they believe are discriminatory. The group also files complaints with relevant authorities and companies, and sometimes provides legal help.

“Although China has laws and regulations to protect women’s employment rights, gender discrimination in the workplace is still very serious,” said Ren Zeping, chief economist at the Evergrande Research Institute.

In a survey of more than 66,000 people conducted by recruitment portal Zhaopin last year, overall pay for female workers was 17 per cent lower than male workers, and only 5 per cent of women took management roles compared to 9 per cent of men.

Last year, Workplace Gender Equality Watch published notices on more than 100 discriminatory job listings on average per month, up from an average of 69 in 2019.

Based on submissions via social media, many of the roles involved law firms, public institutions, state-owned construction and engineering firms, as well as schools.

The civil service, particularly at the local level, is a hot bed for gender discrimination, according to an analysis of all published jobs from 2017 to 2020 conducted by the group.

The share of roles preferring men accounted for more than 10 per cent of all listings each year of the study, with women preferred for just over 1 per cent of roles last year, up from zero in 2019.

Based on official data, the government of Guangdong province, an economic powerhouse in the south of the country, had the most gender discriminatory roles than other provinces, offering 1,449 civil servant roles for men only last year, six times more than for female-only offerings.

Workplace Gender Equality Watch also argued that while some government agencies offered the same number of jobs for men and women, there remains discrimination in hiring practices with less qualified men often hired instead of more qualified women.

In a study conducted before and after China officially abolished its one-child policy in 2016, three researchers led by He Haoran from Beijing Normal University sent fictitious résumés with varied gender information to real job postings in the three most developed cities to test labour market discrimination against expected motherhood.

They found that women, particularly those seen to be within childbearing ages, received fewer responses than before 2016, indicating that women were suffering from a “parenthood penalty” that did not apply to men.

Unlike the planned economy era, when state-owned firms built schools and dormitories to take care of employees’ children and provide social services, China today has a large shortage of nurseries and childcare services that has forced some working aged women to leave the workforce.

In the Zhaopin survey, close to 60 per cent of women said they had encountered questions about their marriage and maternity status during the hiring process.

“For companies, maternity costs are a big consideration … the costs of having children cannot be shared by the society, they can only be shared by firms,” added Tang.

“When they take this into consideration, they will reduce job opportunities for women and prefer men more.”

By law, China protects equal employment, and in 2019 the government started imposing a fine of up to 50,000 yuan (US$7,700) for gender discriminatory job postings.

At the end of last year, the Ministry of Human Resources and Social Security also published a notice banning gender discrimination via online recruitment.

But less than a third of women surveyed by Zhaopin believed that the rules could actually improve the work environment for women.

Lawsuits against gender discrimination during recruitment, though, are rare. One of the first such cases appeared in Zhejiang province in eastern China in 2014, when a new graduate sued a culinary school for repeatedly declining her applications for a clerk role. She was eventually awarded 2,000 yuan (US$309), which failed to even cover her legal fees.

“We are fully aware that recruitment is only the first step. There is more hidden gender discrimination at work, too,” said Tang.

“What we can do is to get rid of discrimination in the hiring process first. And hopefully we can have more government oversight in the future.”