CHINA: The CCP At 100: What next for human rights in EU-China relations? 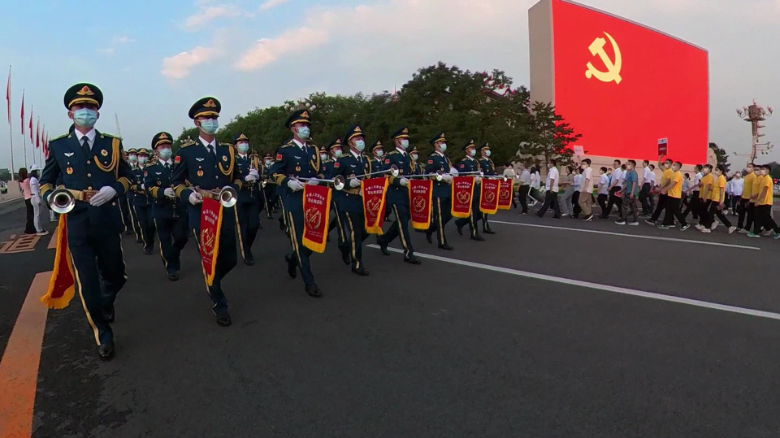 The CCP At 100: What next for human rights in EU-China relations?

9Dashline (01.07.2021) – https://bit.ly/3jFm839 – July 2021 marks the 100th anniversary of the founding of the Chinese Communist Party. The CCP, as the ruling, and self-proclaimed “great, glorious, and correct” political party of modern China, has overseen the country’s economic growth, and imposed communist ideology and absolute party-state control over citizens’ lives. The CCP today remains central to society and the daily experiences that have shaped the Chinese people. July 2021 also marks 26 years since Brussels and Beijing launched a specific dialogue on human rights. The goal, as both established, was to engage and conduct open and frank discussions on “jointly agreed key priority areas”. Yet, in the following years, human rights have become one of their most challenging policy areas, even deciding the fate of the Comprehensive Agreement on Investment.

In light of grand strategic, but increasingly mutually exclusive ambitions, namely Brussels’ ‘geopolitical’ agenda and Beijing’s ‘Chinese Dream’ to realise national rejuvenation and achieve great-power status, what are the prospects for human rights to gain a more prominent role in EU-China relations? With its toughening stance on China, but confronted with the enormous ideological challenge of the CCP as it turns 100, can Brussels address the discursive dissonance burdening EU-China ties, and champion human dignity for all?

In China’s particular brand of authoritarianism, control remains key. Under President Xi Jinping’s leadership, the CCP has tightened its grip over society and strengthened ideological control; minorities suffer mass arbitrary detention, surveillance, and indoctrination. Externally, seeing human rights as an “existential threat”, Beijing has sought to undermine international human rights standards and institutions, including working to weaken the UN Human Rights Council, that could hold it to account, and promote alternative views at the expense of liberal democratic values.

Overall, the EU-China strategic partnership hit its lowest point in 2021, intensifying the underlying mutual distrust, with democracy, human rights, and rule of law remaining significant ‘problems’. Politically, democratic governance in the EU is grappling with the ideological challenge of an authoritarian China. This is all the more dangerous to an EU weakened by its crisis management mode for over a decade, following the 2008 global financial crisis, migration, Brexit, with the pandemic accelerating negative trends such as rising populism and nationalism.

Along with internal challenges to democracy, external factors, such as the United States’ abdication of power under President Trump and an aggressive Russia, have also affected self-perceptions inside the EU, forcing a re-evaluation of its global role, with an increasing number of voices urging greater self-reliance and resilience, or ‘strategic autonomy’.

The EU’s internal vulnerability has encouraged the CCP to double down on unofficial channels to influence internal debate and the political system in the EU, through opaque, deceptive or manipulative operations. This has meant going beyond legitimate public diplomacy, including using disinformation and ‘wolf warrior’ diplomacy to undermine Western democracies and sow internal divisions. In 2014, President Xi referred to the United Front Work Department (UFWD), a CCP-organisation to exert influence abroad, as a “magic weapon” for the great rejuvenation of the Chinese people, there to serve the CCP’s efforts “to seize victory, construction, and reform”.

China’s economic diplomacy and renewed mercantilism have served the CCP’s ambitions to become a driver of change, fuelling a sentiment of national pride, supported by the belligerent ‘wolf warriors’ defending their country’s national interests. Through initiatives such as the 16+1 framework, Beijing sought to divide the EU, damaging its ability to act cohesively on foreign policy issues, including on human rights. While trade remains a shared priority, the glaring asymmetry in market access has served the interests of the Chinese state and its state-owned enterprises (SOEs) at the expense of their European counterparts.

The ‘problem’ of human rights

“The reality is that the EU and China have fundamental divergences, be it about their economic systems and managing globalisation, democracy and human rights”, European Commission Ursula von der Leyen and EEAS High Representative Josep Borrell recently said. As China’s human rights record remains dismal, their divergence has only intensified.

In this climate of confrontation, holding China to honour its own commitments to respect human rights has grown to be an even bigger challenge. Human rights have always been a ‘sensitive issue’ — whereas Brussels sees these as universal and therefore up for discussion, Beijing perceives them as a domestic affair and therefore off-limits. As a result, the human rights dialogue established in 1995 to identify “jointly agreed key priority areas” never facilitated a convergence of views. Instead, the gap between the discourse in joint EU-China statements to embrace human rights, and the practice to effectively cooperate towards their protection has only widened.

Discourse has always played a powerful role in shaping bilateral relations. Since 2003, both parties have framed each other as ‘strategic partners’, agreeing “to continue to consolidate and develop the partnership to the benefit of both sides”. Yearly summit statements have reiterated a bilateral cooperation approach based on “a considerable number of common priorities”. In their 2019 summit, the two sides even recognised “their responsibility to lead by example” in global governance and reaffirmed that “all human rights are universal, indivisible, interdependent and interrelated”.

Yet, the reality of human rights in EU-China relations is one of normative divergence, which paradoxically, co-exists with growing bilateral trade, albeit to varying degrees for individual member states, despite headwinds to Chinese investment across the bloc.

Brussels’ toughening stance on China, however, suggests that in the future human rights could play a more prominent role in bilateral ties. With the EU labelling China “a systemic rival promoting alternative models of governance”, a political reckoning is taking place on the kind of relationship Brussels wants to have with an increasingly authoritarian government that is oppressing its own people and undermining democracy abroad, as it continues to invest in Europe’s critical infrastructure.

The reckoning includes reflections on the role Brussels — and member states — want the EU to play in the world, including in the Indo-Pacific, a region shaped by China’s power projection, and the multilateral strategic alignment of like-minded democracies. A vocal European Parliament has been consistently pushing for “a new and more robust strategy to deal with a more assertive China”, urging the EU to use its economic leverage to challenge China’s crackdown on human rights by economic means.

In the early months of 2021, Brussels’ and Beijing’s diverging positions on human rights shaped the fate of the Comprehensive Agreement on Investment (CAI). Following the conclusion of negotiations on CAI in December 2020, the EU sanctioned Chinese officials believed to be involved in human rights violations of the Uyghur minority in Xinjiang. In a significant step forward for human rights protection, Brussels imposed these sanctions under the EU Global Human Rights Sanctions Regime adopted in December 2020. Beijing retaliated with its own counter-sanctions on European individuals, including MEPs whose support was vital to CAI.

Signalling the European Parliament’s (EP) willingness to prioritise human rights, its Members voted to freeze the CAI and called on the Commission to “use the debate around CAI as a leverage instrument to improve the protection of human rights and support for civil society in China”. The EU is also adopting more robust measures to protect itself against perceived overseas threats, including an investment screening mechanism, and legislation to crack down on state-owned enterprises from outside the EU. EU institutions have agreed on a revised export control regime on cyber-surveillance and facial recognition software that can be used in human rights violations and issued a toolbox on 5G security and an action plan on disinformation. While the EP’s role is significant, it will be the member states’ willingness that will shape Brussels’ capacity to influence China’s development.

The notion of Europe’s normative power, particularly the idea that the EU can have a transformative impact on China, has been crucial in shaping the EU’s approach to human rights. The concept is now side-lined by the perception that China is a “systemic rival”. However, the past two decades have shown that despite the EU’s efforts to shape China’s development in line with international norms, “shared visions and interests” in bilateral relations, as the Commission stated in 2003, seem to be a thing of the past. Instead, Beijing is pursuing a grand strategy of reshaping and dominating the regional and international order through a variety of tools and influence campaigns. In this process, ideas, discourse, as well as critical technologies all matter. In 2013, Chinese President Xi Jinping spelt out his approach to international messaging as “working hard to create new concepts, new categories and new expressions that integrate the Chinese and the foreign, telling China’s story well, communicating China’s voice well”.

In June this year, President Xi said that “we must focus on setting the tone right, be open and confident but also modest and humble, and strive to create a credible, lovable and respectable image of China”. This reveals the limits of the regime’s heavy-handed style, and its failure to cultivate goodwill through soft power. Yet, instead of conforming to its own commitments to international norms and using genuine public diplomacy to win the hearts and minds of the world, the CCP is confronting the West while seeking to comfort its domestic audience. All this is geared to maintain its legitimacy.

The leadership’s goal to build a “community of common destiny for mankind” as the primary aim of its foreign policy has however long raised questions in the international community. Document 9 raised even bigger questions, when reports appeared in the spring of 2013, that Party leadership was urged to guard against seven political “perils”, including “universal values” and the promotion of “the West’s view of media”. Ironically, the communiqué urged Party members to strengthen resistance to “infiltration” by outside ideas and to handle with renewed vigilance all ideas, institutions, and people deemed threatening to unilateral Party rule. As the CCP celebrates its one hundred years, the message is to shape perceptions; to infiltrate and resist infiltration.

But the CCP’s triumphalist rhetoric hides an inconvenient truth: the fracturing of Chinese society, due to ethnic and gender discrimination, as well as a severe rural-urban divide. Important sectors of society, whose support is vital for pursuing national goals, are unable to participate in China’s intellectual and political life. As China faces dramatically declining birth rates, women still continue to be viewed as reproductive tools to achieve the nation’s development goals.

Does the decision to impose sanctions for human rights abuses in Xinjiang foretell Brussels’ readiness to use its tools to ensure a more prominent role for human rights in EU-China relations? Beijing’s attempts to manipulate Europe’s political and economic vulnerabilities have brought about a backlash from EU member states, and decisive action from the European Parliament. But ultimately, it is the political will of member states that will be decisive in shaping the extent to which Brussels will use the measures in place and address human rights in its future dealings with Beijing.

Zsuzsa Anna Ferenczy PhD is author of ‘Europe, China, and the Limits of Normative Power’ (Edward Elgar Publishing, 2019), Affiliated Scholar at the Department of Political Science at the Vrije Universiteit Brussel, Consultant on China and Korean Peninsula at Human Rights Without Frontiers, former political advisor in the European Parliament (2008-2020). She is a Non-Resident Fellow at Taiwan NextGen Foundation and Head of the Associate Network at 9DASHLINE.

DISCLAIMER: All views expressed are those of the writer and do not necessarily represent that of the 9DASHLINE.com platform.