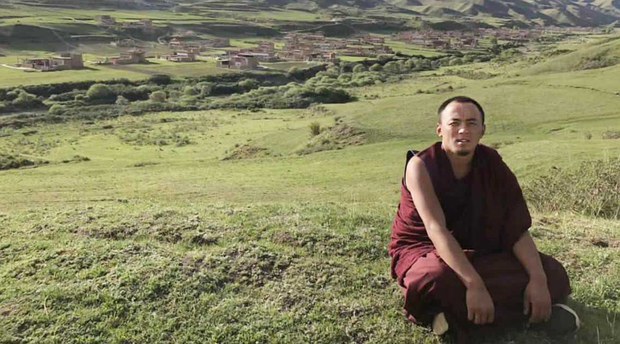 Rinchen Tsultrim was accused of ‘working to split the country,’ a charge often leveled against Tibetans resisting assimilation into China’s dominant Han culture.

By Sangyal Kunchok and Lobe

Radio Free Asia (24.06.2021) – https://bit.ly/2SHKluB – A Tibetan monk held incommunicado in custody following his arrest two years ago on suspicion of working to “split the country” was sentenced in a closed trial and is serving a four-and-a-half year prison term, family members say.

Rinchen Tsultrim, 29 at the time of his arrest, was taken into custody on July 27, 2019 in Sichuan’s Ngaba (in Chinese, Aba) county for peacefully expressing his thoughts on Tibetan political and social issues on social media, RFA was told in earlier reports.

He was then held without word given to his family on his whereabouts until earlier this year, Tsultrim’s sister Kunsang Dolma told RFA, speaking from her home in exile in India.

“On March 23, 2021, my family in Tibet was informed by the Chinese authorities that my brother Rinchen Tsultrim was given a four-and-a-half year prison sentence without a fair trial and is now being held in [Sichuan’s] Mianyang Prison,” she said.

“He had been warned three times by the Chinese authorities for expressing his thoughts and writings on a range of Tibetan political, social, and cultural issues before he was arrested in 2019,” Dolma said, adding, “At one time he was also compelled to sign some documents.”

Tsultrim’s ongoing contacts with Tibetans living in exile were another important factor leading to his arrest, a Tibetan living in exile in India told RFA’s Tibetan Service in an earlier report.

Separatism, or “working to split the country,” is an accusation often leveled by Chinese authorities against Tibetans opposing the assimilation of Tibet’s distinctive national and cultural identity into China’s dominant Han culture, and scores of monks, writers, educators, and musical performers have been arrested under the charge in recent years.

Chinese authorities in Tibet continue to tighten controls over information flows in the region, arresting Tibetans for sharing news and opinions on social media and for contacting relatives living in exile, sometimes with news of anti-China protests, according to rights groups and other experts.

Particular targets of censors and police are images of the Dalai Lama shared on mobile phone and calls for the preservation of the Tibetan language, now under threat from government orders to establish Chinese as the main language of instruction in Tibetan schools.

Security is now being tightened in Tibet and Tibetan areas of China in the lead-up to the July 1 centenary celebration of the founding of the Chinese Communist Party, said Golok Jigme, a former Tibetan political prisoner now living in exile in Switzerland.

“As the 100th founding anniversary of the CCP approaches, access to websites is being tightly controlled, and social media platforms are being  especially closely watched,” Jigme said, citing sources in the Chinese provinces of Sichuan, Gansu, and Qinghai.

“Anyone suspected of involvement in any kind of rebellious act is being taken into custody, because the Chinese government doesn’t want to take any chances.”

With Tibetans fearing the consequences of attention from the police, it has now become even more difficult than usual to receive news or other information from inside Tibet, Jigme said.

A formerly independent nation, Tibet was taken over and incorporated into China by force nearly 70 years ago, following which the Dalai Lama and thousands of his followers fled into exile in India, and Beijing maintains a tight grip on Tibet and on Tibetan-populated regions of western Chinese provinces.