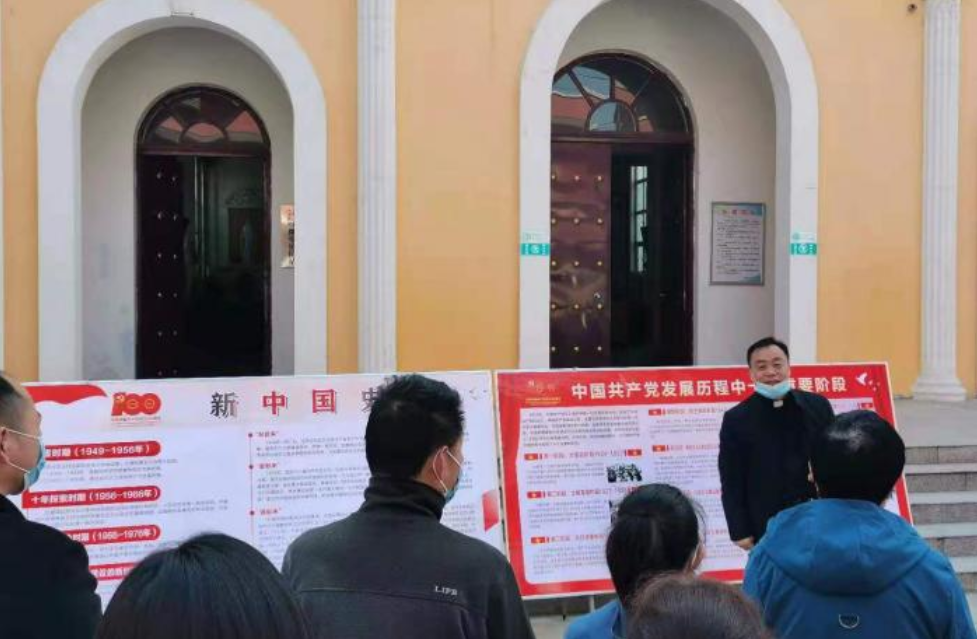 Across China, multiple celebrations mark the anniversary of the founding of the Communist Party of China. Catholics and other believers can choose among a panoply of seminars, conferences, trips, visits, and exhibits. For Mgr Ma Yinglin, without the Communist Party there would be no New China, no socialism with Chinese characteristics, and no happy life for people today.

AsiaNews (19.04.2021) – https://bit.ly/3szQRPV – The centennial of the founding of the Communist Party of China is being celebrated under the banner of “knowing, thanking, listening, following the Party”.

Catholics can choose among a number of seminars, conferences, trips, visits, and exhibits, after the Council of Bishops and the Chinese Patriotic Catholic Association (CPCA) decided to decree the centennial as the most important event for the Church in China. Indeed, “knowing” means “knowing the history” of the Party, which is why a deep ‘communist’ education must be assimilated.

In Fujian, conferences and visits to sites important in the history of communism were held between 12 and 14 April under the banner “Love the Party, love the homeland, love socialism” with the participation of more than 50 representatives from all official religions (Buddhism, Taoism, Islam, Catholicism, Protestantism).

The official report of the events stressed the emergence of a “State Church”, totally obedient to the emperor with “a solemn flag raising ceremony in a Catholic church in Changting (Fujian) in what was the first event of its kind involving the five main religions in a place of religious activity in the province”.

Seminars on “knowing, thanking, listening, following the Party” were also held in Guangdong. Last Saturday, the Standing Committee of the Guangdong Church focused on an “Independent, Self-Managed, and Self-Elective Church (in episcopal appointments and ordinations).”

These reflect the long-term goals of the CPCA, and before that, Mao Zedong, i.e. the creation of a Chinese national Catholic Church, subject to the power of the state.

Last Thursday, Liu Yuanlong, CPCA vice-president and secretary general, chaired a second seminar in Beijing on the history of the Party, along with the president of the Council of Bishops, Mgr Ma Yinglin, one of the bishops whose excommunication Pope Francis reversed.

“In his closing speech, Bishop Ma Yinglin pointed out that history has clearly shown that without the Communist Party there would be no New China, no socialism with Chinese characteristics, and no happy life for people today.

“China’s Catholic community should actively respond to the initiative to ‘love the Party, love the homeland, love socialism’, as well as firmly support the leadership of the Chinese Communist Party, support the socialist system with Chinese characteristics, firmly follow the path of patriotism and love, and actively adapt to socialist society” .

On 11 April, a conference on the history of the Party was also held in Shifang (Sichuan), chaired by Fr Liu Conghua, organised by Luo Min, deputy director of the Shifang Municipal Office, centred on “Developing the Study of Party History and Educational Propaganda in Religious Circles”.

Tang Jun, a representative of the United Front, urged the Catholic Church to “unite patriotism and love in order to teach the history of the Party.”

Last but not least, a real show of “gratitude” towards the Communist Party came on Easter in Zhengzhou (Henan) where many churches are closed due to the pandemic, while cinemas, restaurants, factories, and entertainment centres are open.

Here, a priest, Fr Wang Yuesheng, stood in front of a closed church (see picture), holding a special exhibit dedicated to the “glorious history of the founding of the Communist Party”. This shows how people can be grateful to the Party for the closed doors of the church.