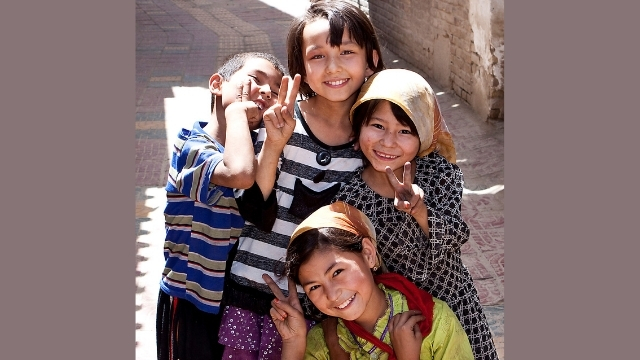 The Chinese Communist Party has forcibly displaced them into Han Chinese families or state-run orphanages. Figures prove the program is expanding.

Bitter Winter (06.05.2021) – https://bit.ly/3ijwG7l – Undoubtedly, Uyghur children have suffered more than anyone during the ongoing Uyghur Genocide being committed by the Chinese Communist Party. In 2014, Beijing began to build concentration camps, imprisoning millions of East Turkestan (Ch., Xinjiang) residents beginning in 2017. Children forcibly taken from their families were either sent to Chinese orphanages, forced to live with Han Chinese families, or were left homeless. Children with families in other countries are not permitted to join them. This cruelty experienced by children of East Turkestan constitutes a violation of human rights, universal values, international conventions, and law. The Chinese Communist Party is openly committing a crime against humanity, one that qualifies as an example of genocide.

The rights of every child under the age of 18, regardless of age, language, religion, gender, and race, are protected under international law. Protection of children’s rights is based on the United Nations Convention on the Rights of the Child, signed in 1989. 196 countries, including the People’s Republic of China, are parties to the convention. The 54-article convention aims to provide the necessary conditions for any child to lead a healthy life without discrimination, based on the child’s interests in decisions affecting the child’s life.

Article 2 of the Genocide Convention defines genocide crimes in part as “taking measures to prevent births in the group,” and “forcibly transferring children from the group to another group.” The Chinese Communist Party has been forcibly sterilizing women, and displacing Uyghur children into Han Chinese families or state-run orphanages.

When the articles of the Convention on the Rights of the Child are examined, it is seen that the children of East Turkestan are under great victimization and persecution. Article 2 of the Convention on the Rights of the Child states that no discrimination should be made against children. When we look at the genocide in East Turkistan within the scope of this article, the following picture emerges: Uyghur children in East Turkistan are deprived the rights of education, shelter, health, access to food, because they are Uyghur. After their parents are sent to “Concentration camps” without reason, these Uyghur children are targeted for indoctrination according to the Communist doctrine, and forcibly separated from their own culture and values.

Article 9 of the Convention emphasizes that children cannot be separated from their parents unless there is maltreatment, neglect, or separation between spouses. Judicial remedy is also open for this decision. The only reason why more than 900,000 Uyghur children were taken away from their families is for the erasure of their Muslim, and Uyghur identities. There is absolutely no maltreatment of the mother and father against the child. There is no quarrel between mothers and fathers. The authoritarian government of Beijing is forcibly separating parents and leaving children alone without parental guide.

Article 5 of the Convention emphasizes that the parents’ responsibilities, rights, and duties should be respected in guiding the child in line with the development of the child’s abilities. It also emphasizes that distant family or relatives may also have a right in this regard if local traditions prescribe. However, the Chinese Communist Party allows neither parents nor any other relative to guide or direct Uyghur children. The CCP, which usurped this right of parents, wants to turn Uyghur children into atheist.

The Chinese Communist Party, which never allows any freedom in East Turkistan, Tibet, and South Mongolia violates the Children’s Rights agreement with this policy. Articles 13, 14, and 15 of the Convention protect children’s freedom of thought and freedom of religion and conscience.

Another important issue of the Convention on the Rights of the Child is Article 30. Article 30 defines the following: “In States where there are minorities or indigenous peoples based on ancestry, religion or language, a child belonging to such a minority or indigenous peoples shall benefit from his own culture together with other members of the minority community to which he belongs. they cannot be deprived of the right to believe and practice and to use their own language.” This article expressly guarantees that every child, even an ethnic minority, has the right to learn his or her religion, language, and culture. However, the Chinese regime never allows any other culture, language, and religion to exist, much less be taught to children, apart from its own doctrine and Han nationalism..

Another article violated in the Convention on the Rights of the Child by the Chinese Communist regime, which employs Uyghur mothers and fathers as slave laborers, is within this scope. Article 32 of the Convention ensures that children will not be forced to work. Contrary to this article, Uyghur children and students are forced to work by the Chinese Communist regime. The United States Department of Labor found that China has violated international law on child labor.

The Chinese Communist Party, despite saying that everything is guaranteed in its laws regarding religious freedoms, human rights, and similar issues, has never fully implemented them. The regime, which implements all kinds of prohibitions by taking shelter behind a concept such as ‘disrupting public order”, has a similar approach for children’s rights. The Chinese constitution states that the state promotes the multifaceted moral, intellectual, and physical development of young people, that children are protected from the state, and that maltreatment is strictly prohibited. Beijing claims that there is no Uyghur culture, that they are only Chinese citizens. However, we can see that this is being artificially made through measure to prevent the development of Uyghur children.

As in every state, China has their own laws for the protection of minors. According to article 43 of China’s Law on the Protection of Minors, the state’s orphanages are responsible for orphans with no families. However, China repeatedly authorizes the removal of a Uyghur child from their relatives and send them to state-run orphanages. For this reason, taking children in East Turkistan without the consent and permission of their relatives, even if their parents are in a concentration camp, is outside of their own law.

The Chinese Communist Party, which violated its own constitution and laws and disregarded international law, removed approximately 900,000 Uyghur children from their families and sent them to the regime’s orphanages and boarding schools. However, it is not known in this sense how many thousands of children were victims of genocide, because the CCP ruled East Turkestan with an iron fist behind closed walls. As Human Rights Watch’s China Director, Sophie Richardson, has stated, removing children from their families constitutes one of the most brutal steps of the Communist regime. One of the first actions of Chen Quanguo, whose repressive policies are known to those who study East Turkestan and Tibet was the popularization of orphanages for children stolen from their families. He ordered these orphanages to house many children without the consent of the parents or the relatives concerned. The order includes those whose parents have died and those whose families have been sent to concentration camps. The Communist regime under Chen’s secretariat set targets for local authorities to send Uyghur children to camps.

In December 2016, the Chinese Communist Party made an important decision concerning children’s policies of oppression against Uyghurs. It was announced that only Chinese language should be taught in schools in East Turkistan, and the issues of loyalty to China and party loyalty will be emphasized. In the document published on the Ministry of Education website in 2017, it was announced that boarding schools would be expanded. Adrian Zenz’s report also revealed the extent of the pressure made to sinicize Uyghur children. According to the figures in the document, 40 percent of the students attending secondary and primary schools, which is about 497,800 children, stay in boarding schools.

Drawing attention to his research on China’s human rights actions in East Turkistan, the comprehensive report published by Adrian Zenz in 2020 included comprehensive information on sending Uyghur children to public boarding schools. According to the information in the report, those whose parents were sent to concentration camps were defined as ‘double-detained.’ The Communist regime instructed local officials to collect detailed information on children. As a result of the data collected, most of the children in East Turkistan were deprived of the care of their families because their parents were in a concentration camp. An order has been given to take care of children whose families are detained as soon as possible, meaning that Uyghur children are taken from their relatives and sent to public boarding schools or orphanages. Since the real purpose of the Chinese Communist regime is to turn Uyghur children into Chinese, their concern is to educate according to the Communist doctrine. An instructor working at the place where the children are staying stated that their condition is horrible, and they wear the same thin clothes even on the coldest days of winter.

As of 2017, the number of boarding schools and private care centers in East Turkistan increased. In this context, it was planned to build 4,387 pre-school education institutions in February of that year, where education in only the Chinese language will be predominant. It is aimed that 562,900 children will receive education in these schools. From 2016 to 2020, it was planned to increase the rate of participation in pre-school education to 100 percent. The Chinese Communist Party has allocated approximately 8 billion RMB for the construction of pre-school education buildings. As a result of these plans of the Chinese Communist Party, there has been a great increase in the enrollment of students admitted to pre-school schools across East Turkistan. While the targeted figure for 2017 was 562,900, the actual numbers were 200,000 more than this and reached 759,900. It was aimed to enroll 1 million children in these schools for the last spring semester of that year. The actual figure reached 1.4 million. The number of students per school has also increased from 433 to 1000. Enrollment increases continued in the following year, and the figure rose to 1.6 million. Another evidence showing the consequences of the policy for Uyghur students to be educated within the framework of the Communist doctrine is the situation of schools according to their square meter size.

Between 2016 and 2017, there was an 85 percent increase in schools’ total square meter size in East Turkistan. Especially in the Hoten region, this increase is greater and more than doubled. The size of the area covered by the schools reveals that not only the classrooms but also the boarding school sections have been expanded. In pre-primary schools, students are taught either as full-care or part-care. Full-care means that students go to school on Monday and stay until Friday. Half-care means only daytime training. The full-care system is specifically aimed at children staying behind whose parents have been sent to concentration camps. These programs, developed in line with the ideology of the Communist regime, include secondary school and other levels. It has become obligatory for children over a certain age to be sent to boarding schools in some regions. All students completing the 4th grade in Kashgar are automatically sent to boarding schools. According to the information obtained from another source, every child who reaches the age of 9 is sent directly to the boarding school of the Communist regime.

The Chinese Communist regime sent some children to concentration camps with their parents, as eyewitnesses found in the Xinjiang Victims Database. According to the information in this database, 100 of the 5000 people staying in one concentration camp are children. Ömer Bakali, one of the Uyghur intellectuals, stated that some families were brought to the camp during their stay in the concentration camp.

As a result, it is clear that the biggest victims of the genocide in East Turkistan are children. A generation is wanted to be destroyed by genocide, and there is an embarrassing silence when the world should stand up against it. Governments and rulers who rely on the Beijing government ignore these crimes against humanity.