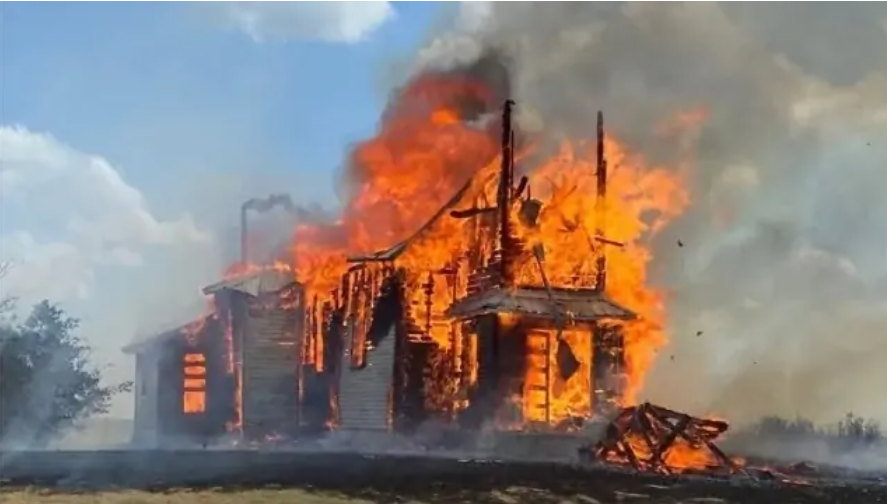 Yes, Christian churches should apologize for what happened in Indian Residential Schools. No, destroying places of worship is not an acceptable reaction.

Bitter Winter (24.07.2021) – https://bit.ly/3y3tDoW – Earlier this month, Bitter Winter was contacted by Vietnamese Canadians in Calgary, Alberta, who had their church set on fire by unknown arsonists. This was the Calgary Vietnamese Alliance Church, affiliated with the Protestant denomination Christian and Missionary Alliance. The Vietnamese were eager to tell their story. Boat people came to Calgary some forty years ago, were granted asylum, and built the church with what they managed to save. They are poor people, and the church is a testament to their faith and sacrifice. What they cannot understand is why their church was targeted to protest the discovery of mass graves where First Nation children who died in Indian Residential Schools in Canada were buried. They sympathize with the grief of First Nation Canadians—but what does burning a Vietnamese refugee church have to do with it?

The incident is not isolated. In the Calgary area only, twelve churches were attacked. The number of Catholic and Protestant churches vandalized or set on fire in Canada is escalating, and is now close to one hundred, despite the fact that several First Nation leaders have called for attacks to stop and stated in unequivocal terms that vandals and arsonists do not represent them. Actually, several survivors of the Indian Residential Schools remain Christian, and the arsonists damaged them as well.

Some of our readers may be well-informed about what precipitated the violence against Christian churches in Canada, but I write from Europe where many are not.

What triggered the violence was the discovery of the remains of children buried in unmarked graves at Indian Residential Schools (IRS), first 215 in Kamloops, British Columbia, then 751 in Marieval, Saskatchewan, and another 182 in Cranbrook, also in British Columbia. The story quickly became international, with sensational titles around the world implying that children had been fathered by Catholic priests and killed after birth, eliminated to prevent them from telling stories of sexual abuse, or shot while they were trying to escape. It was this kind of sensational stories that caused the widespread violence.

What exactly happened? In 2006, the government of Canada settled the largest class action in the history of the country, brought by representatives of First Nation tribes who claimed damages for the abuses suffered by their children in Canada’s IRS. As part of the settlement, which also involved monetary compensation, the government agreed to set up and fund a Truth and Reconciliation Commission of Canada, which worked from 2008 to 2015 and produced a voluminous report on the IRS history.

The IRS program became national and mandatory in 1894, when the government mandated that all First Nation children aged 7 to 16 should leave their families and be taken to Christian boarding schools, operated by both the Catholic and some Protestant churches. Actually, Catholics managed 60% of these churches, and Protestants 40%. Voluntary boarding school programs had been operated by Christian churches before, and they continued until 1969, after in 1948 attending IRS had become no longer mandatory, but was still encouraged with monetary and other bonuses given to the participant families. From 1969 to 1997, the government still operated some IRS, taking over from the churches. In more than one century, some 150,000 students were enrolled in the IRS.

Stories of abuses and protests against the IRS system had emerged before, but became a national movement in the 1960s, leading to lawsuits, the settlement of 2006, and apologies by both the government and the Christian churches involved.

The Truth and Reconciliation Commission called the IRS project a “cultural genocide” aimed at “killing the Indian in the child.” Children were prevented from using their language, and learn about their culture, and it was a matter of course that they should join the religion of the denomination operating their IRS. Corporal punishment was also common, although it also existed in the Canadian school system outside the IRS.

The idea that “savage” children should be “civilized” by separating them from their culture was, of course, not Canadian only. For example, when I served in 2011 as the Representative of the OSCE (Organization for Security and Cooperation in Europe) for combating racism, xenophobia, and religious intolerance, I discussed with the Swiss authorities the aftermath of a similar project that from 1926 to 1973 took children of the itinerant minority known as Yenish from their families to foster homes and boarding schools, which also led to court cases and settlements. And in Canada the policy did not apply to First Nation children only. As late as the 1950s, as Canadian scholars Susan Palmer and Shane Dussault have documented, children of the Russian immigrant sect known as the Doukhobors were forcibly taken from their parents and forcibly placed in residential schools, where they were not allowed to speak Russian.

This explains why the IRS project, until World War II, was widely supported by Canadian politicians and media, but does not eliminate the responsibility of the government and the churches for what is now almost unanimously acknowledged as a wrong and even criminal policy. I personally believe that evangelizing non-Christians is part of the churches’ religious liberty, but the coercive features of the IRS program, rather than a form of evangelization, were a gross and inexcusable violation of religious and cultural freedom.

Whether in addition to a cultural genocide there was also a physical genocide, and children were systematically killed, is a different question. After the discovery of the unmarked graves this year, stories of sexual abuse and of young female students raped by priests, pastors, and lay teachers, with their children killed at birth if they became pregnant, and of students shot when they tried to escape, told by some survivors to the Truth and Reconciliation Commission resurfaced in Canadian and international media.

Reading the Commission’s report, one has the impression that some fire existed beyond the smoke, and sexual abuse was common enough internationally in boarding schools, religious or otherwise. On the other hand, tales of homicide and infanticide in the Truth and Reconciliation investigation are rare, told as rumors circulating in the schools without naming exact names and circumstances, and impossible to verify after so many years. Documents exist about a handful of students who committed suicide, and two young girls drowned in 1913 during a picnic expedition at the Spanish, Ontario, school, possibly due to the lack of proper supervision. Perhaps horrific cases of murder occurred—we have no way of knowing it for sure—but they did not happen on a massive or even significant scale, or they would have left clearer traces.

But, one can ask, aren’t the unmarked graves evidence enough? The answer is no. Professor Scott Hamilton of Thunder Bay Lakehead University is regarded as the leading expert on IRS cemeteries. He was asked by the Truth and Reconciliation Commission to submit a written report, which is public. After the recent incidents, Hamilton told the media that the discoveries are just the tip of the iceberg, as there are some 130 IRS abandoned cemeteries still to be explored or found.

The report is about both death and burial. On burial, Hamilton shows how the government and the churches continued for decades to fight on who should pay for the inhumations. Returning the bodies of students who died in the IRS to their faraway families occurred rarely, since this was expensive. The government consistently told the IRS that available funds for burials were scarce, and expenses should be reduced as much as possible, by using mass graves if necessary. This did not only involve children, as resident teachers who died were often buried in the same graves. Similarly, to the regret of Professor Hamilton, there were no funds to keep the cemeteries after the schools were closed, and they were largely abandoned and disappeared, except in few cases where the churches maintained them at their own expenses.

But how many died, and why? The official governmental records give a figure of 3,213, but the Truth and Reconciliation Commission believes it is certainly underestimated, and real figures may be in the tens of thousands.

As Hamilton explains, the overwhelming majority of these casualties were due to tuberculosis and influenza. The rate of death for these causes among IRS students was twenty times higher than among the national population. Unsanitary conditions and poor health care at the IRS were a factor, but figures are not far away from those concerning First Nation population in general. Indigenous had limited resistance to these infectious diseases they had not experienced before meeting the whites.

The IRS situation became even worse during the frequent epidemics. “The magnitude of crisis deriving from an epidemic sweeping through the schools is almost unimaginable from a 21st Century perspective,” Hamilton writes. In 1918, during the Spanish influenza epidemic, the principal of Fort Saint James, British Columbia IRS, the Catholic Father Joseph Allard, reported that initially he tried to conduct proper Catholic funerals for those who died. Then, deceased students “were brought in two or three at a time, but I could not go to the graveyard with all of them. In fact, several bodies were piled up in an empty cabin because there was no grave ready. A large common grave was dug for them.”

It is a sad story, where all have their responsibilities. The Canadian government acted on the basis of the prevailing ethnocidal rhetoric that the “Indian” culture was savage and barbarian, and should be eradicated. The churches were happy to cooperate, believing that the project will result in more converts. All churches involved have apologized in Canada, but calls for a formal apology by the Pope are not unfounded, and it may powerfully contribute to reconciliation. As in the history of other boarding schools throughout the world, it is probable that hidden in, and sometimes protected by, the system, sexual abusers and pedophiles committed crimes—although even scholars who denounce a genocide admit that there were also priests and pastors who did their best to help the children, and some died by remaining in the IRS rather than moving to less dangerous places in times of epidemics.

The media that does not report on the story responsibly also carry a heavy responsibility, and contributed to the violence that followed. They also contributed to the political exploitation of the event by China and other “champions” of human rights, which demanded that international institutions investigate Canada rather than Xinjiang. Sadly, nobody is innocent here, except the children—and the Vietnamese refugees in Calgary and others who had their churches burned in protest of crimes they did not commit.

Photo: The historic Polish Church in Redberry Lake, Saskatchewan, was burned to the ground on July 8, 2021. From Twitter.