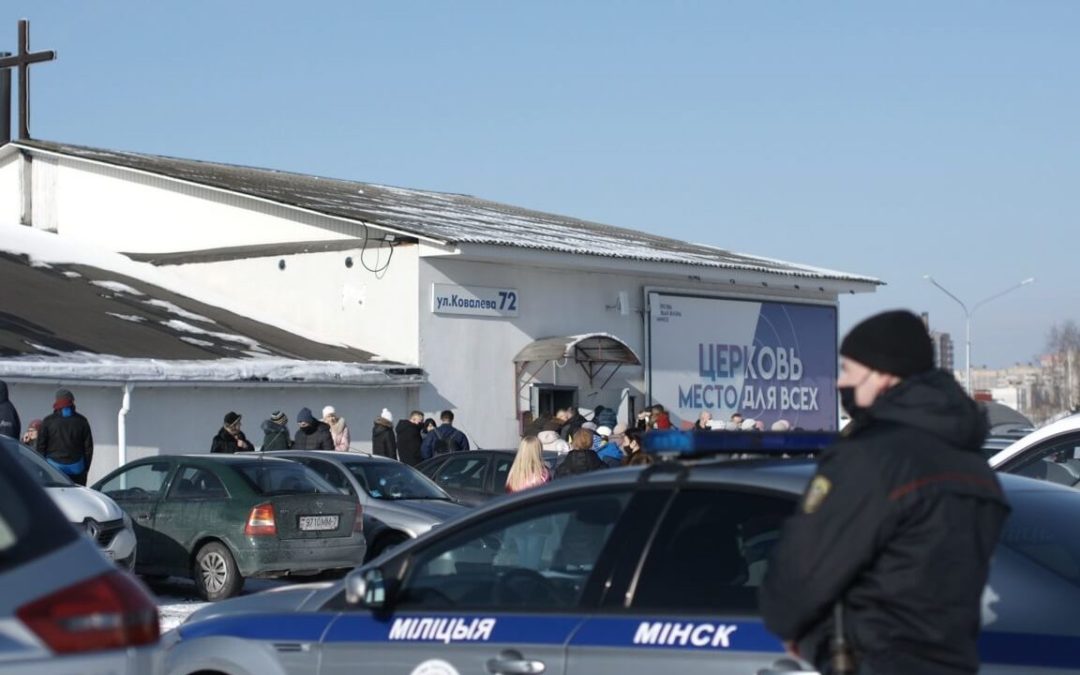 Tab Media (25.02.2021) – https://bit.ly/3rac96L – Government authorities in Minsk, Belarus, on Feb. 17 seized the building of New Life Church, the largest and most influential evangelical church in the country of about 10 million.

The seizure of the church building was described by Bishop Leonid Voronenko of the Full Gospel Church in Belarus as a “perverse situation when those who do good suffer, but it is the reality we are experiencing.”

Police ordered the approximate 70 believers, praying in the church at the time, to vacate the building under threat of arrest.

New Life Church, undeterred by the loss of its building, a renovated cow shed, has been holding recent worship services outdoors in its parking lot.

Pastor Viacheslav Goncharenko posted a statement on the church’s Facebook page on Feb. 19 in response to the government’s actions.

Calling the situation a “serious moment” in the church’s life, Goncharenko said church members need to adapt to “new realities.”

“We are in fasting and praying for our church that God speaks His word and intervenes in this situation. He is our Deputy.”

Tensions have flared in the post-Soviet country since the August 2020 re-election of President Alexander Lukashenko, who has ruled for the past 26 years and is often referred to as “Europe’s last dictator.” Election results have been disputed, leading to widespread protests and alleged police brutality. Belarusian security forces arbitrarily detained thousands of people and systematically subjected hundreds to torture and abuse in the days following the 2020 presidential election, Human Rights Watch reported. Screams of tortured detainees could be heard in the streets outside, Amnesty International added.

Evident by the seizure of the New Life building, churches and church leaders are not immune to such mistreatment from government authorities. New Life Church “is known for its active public positions, including prayer events related to high profile social and political events,” said Michael Cherenkov, executive field director for Mission Eurasia. It’s a reputation that has been met with governmental reprisals, both in earlier years and now.

In a TAB Media Special Report, Cherenkov told TAB Editor-in-Chief Jennifer Davis Rash, that the confiscation of the church building is a “small part of a bigger picture of what’s going in Belarus” in terms of religious pressure and persecution.

The majority of Belarusians identify as Christian. Of the country’s roughly 10 million residents, 73 percent are Orthodox and 12 percent are Catholic, according to Pew Research Center data. Lukashenko describes himself as an “Orthodox atheist.”

Though the evangelical community is tiny, it is an “influential minority,” Cherenkov said.

Cherenkov said Lukashenko considers churches in his country “rebellious” and the government is sending a message: “I am watching over you.”

That’s quite literally true. A 2003 International Religious Freedom Report by the U.S. State Department said that while the Belarus Constitution provides for freedom of religion, that right is restricted in practice. That report noted the harassment of churches not affiliated with the Belarusian Orthodox Church, a branch of the Russian Orthodox Church and the only recognized Orthodox denomination in the country.

A law passed in 2002 requires churches to register and seek permission from government authorities for religious activities. The government repeatedly rejects registration of Protestant churches and other non-Orthodox denominations.

According to New Life Church’s website, the church was registered Dec. 22, 1992, by the Minsk City Executive Committee.

Catholic churches and leaders in Belarus have also endured political pressure and persecution in recent months.

On Aug. 15 “Catholic Archbishop Tadeusz Kondrusiewicz said, ‘People have the right to know the truth’ [about election results],” Cherenkov said. Two weeks later, on Aug. 31, “Lukashenko punished him” as the border patrol denied the Catholic leader, a Belarus citizen, return entry into his homeland from Poland. “They punished him immediately and sent a very clear message to evangelical and orthodox people as well,” Cherenkov said.

The U.S. Embassy in Minsk posted a statement Feb. 22 denouncing the government’s crackdown on churches.

The statement calls on Belarus “to protect religious freedom and uphold the right of all faiths to practice freely.”

“We are concerned by the eviction of the New Life Church and recent pressure against religious clergy and laymen who exercise their fundamental freedoms. Belarus as a member of the OSCE (Organization for Security and Co-operation in Europe) has agreed to protect all human rights and we urge authorities to stay true to their commitments,” the statement reads.

Cherenkov’s perspectives on religious persecution in Belarus are shared by many.

“It’s obvious they [government authorities] are trying to pressure the Church, which means the Church is being persecuted. Although no one speaks openly about it, nor did they when persecution was severe during the Soviet-era struggle against faith and Church. The facts show the situation is now similar,” said Bishop Yuri Kasabutsky, vicar-general and auxiliary of Belarus’s Minsk-Mogilev diocese, in an interview last September with The Tablet, an international Catholic news weekly.

Evangelicals, he said, are urging Belarus citizens not to forget past incidents of government atrocities. Christians were among those who participated in the Aug. 15 “chain of repentance,” stretching 15 kilometers from Kurapaty, where the Soviet inflicted atrocities on Belarusians, to Akrescina, a detention center infamous for holding political prisoners. Many who participated in the chain of repentance were holding Bibles or crosses.

In addition to urging Belarusians to remember past atrocities, Christian leaders in Belarus are pleading for prayer from the global community of believers.

“New Life Church is now paying a high price for being faithful. In this context, I ask your prayer support. Pray not just for New Life Church, but pray for all evangelical and for the Catholic and orthodox church,” said Cherenkov, who has family in Belarus.

“Pray specifically for bravery; they (Christians and church leaders) need it,” he said. Pray also for creativity, he urged. “In this context of extremely limited freedom, our people have to be creative in how to reach people — how to reach out to even their persecutors to tell them about Christ, about forgiveness, about grace, about the gospel of Jesus Christ. They have to be brave and creative.”

Such prayers, he believes, can lead to “spiritual, economic, political and cultural transformation” in Belarus.

“Let us be strong, united, brave and creative. Please pray about that.”

Listen to the Cherenkov interview in its entirety below.