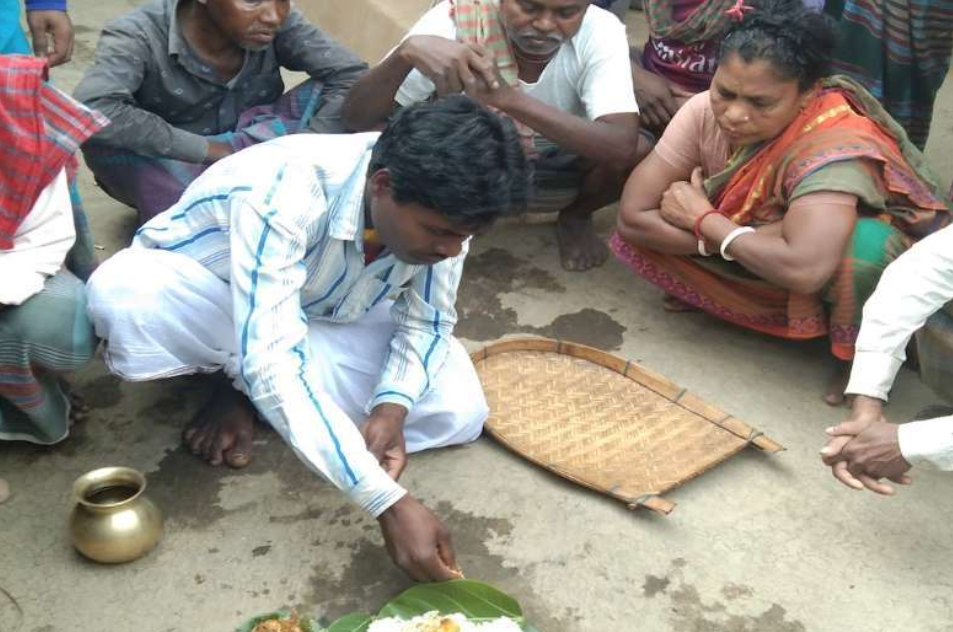 Scores of people from the indigenous community are embracing their old Sarna religion, claiming the Church has neglected them

UCA News (28.04.2021) – https://bit.ly/3vpmflX – Dozens of indigenous Santals who embraced Catholicism years ago have returned to their ancient, nature-worshipping Sarna religion, alleging a lack of social security and support from the Church.

In the latest case, a Santal family returned to the Sarna faith in the presence of leaders of Santal villages in Niamatpur in Naogaon district on April 19.

A photo of the reconversion ceremony posted on Facebook triggered a heated debate among Christian and non-Christian Santals over the causes of conversion of Santals to Christianity and their return to their ancestral creed.

Santal leaders claimed that people from indigenous communities are returning to the old faith as they face negligence and lack of social support.

Others claimed that they became Christians “out of greed” and returned when their wishes were not fulfilled.

Noresh Tudu (not his real name) converted to Catholicism with his seven-member family in 2000. However, they renounced Christianity and returned to the Sarna faith in 2018.

Tudu, 42, a private job holder, says he was attracted to the Christian faith due to great social works by Catholic priests.

“I’ve seen some Catholic priests doing extraordinary work for Santal people. They have been providing medical facilities when needed and sent our children to schools and hostels. They stood beside us in any difficult situation such as land disputes or lack of food. I became a Christian because of their kindness, not because of greed,” Tudu told UCA News.

However, Tudu claimed that he felt betrayed and frustrated when he faced social problems including a land dispute.

“My community abandoned me since I became a Christian. When I faced a legal case over a land dispute, no one from the Church came to support me. However, some people from my community stood beside me. I decided to return to my traditional faith to be united with my community,” he added.

Tudu said 15 Santal families became Catholics with him in 2000 and all except for two have returned their traditional faith.

A Catholic priest said allegations of negligence and lack of support from the Church are baseless and suspected social pressure from the community was behind reconversion of ethnic Christians.

Subas Murmu, 34, a Santal primary school teacher who follows the Sarna faith, has been a vocal critic of Christian evangelists who allegedly proselytize ethnic people by defaming their traditional faith.

“I have no problem with who is following which religion. But I cannot except when evangelists defame our traditional faith to make it an eyesore for people. They highlight the prejudices about our religion and convert Santals to Christianity with false propaganda. For years, this campaign of conversion has caused division within the Santal community,” Murmu told UCA News.

He claimed that Santals who convert to Christianity are greedy as they are lured by promises of education for children and good jobs.

“Sometimes, indigenous people who marry Christians are also forced to become Christians. There are cases of Santals who converted due to promises of residence on church-owned land,” he added.

Murmu alleged that mass conversion of Santals by Christian missionaries in the past has divided the community and the unity and harmony that existed in the community have been lost.

“I wish to establish a common platform for Santals regardless of whether they practice Christianity or the traditional faith. We need to be united and think about developing the community,” he said.

Santals are one of the largest ethnic indigenous groups in India and Bangladesh and are believed to be among the earliest settlers on the Indian subcontinent. In Bangladesh, Santals are spread in various northern districts close to the Indian border.

Both in India and Bangladesh, Santals are among the most marginalized communities due to lack of education and extreme poverty.

Over the past decades, about 200,000 out of more than 250,000 Santals in Bangladesh have become Christians, according to the National Adivasi Council, which covers northern Bangladesh. Most converts have been extremely poor and the conditions of most Santals didn’t change much even after changing faith, council leaders say.

Dinajpur and Rajshahi dioceses cover much of northern Bangladesh and both are predominantly indigenous, with Santals forming the majority of more than 110,000 Catholics.

Santal Christians, however, refuted claims that the faith didn’t change the lives of people.

Subodh Baskey, a Santal Catholic and development worker, said his grandparents became Christians not to gain anything but because they loved Christianity, adding that his family didn’t exploit the faith to get money, jobs or land.

“It is true that those who have become Christians are better off than other Santals or other indigenous groups. They have become educated, secured jobs and improved their lives,” Baskey told UCA News.

He also alleged that many priests don’t offer spiritual, pastoral and social care to ethnic Catholics.

“Today’s priests are busy with themselves. They don’t seem to take much spiritual care, they don’t talk about the rights of the indigenous peoples, and they are not aware of how to provide social security. There are no statistics or research, but it is true such a negligent attitude has been driving some ethnic Santals to embrace their old faith,” Baskey said.

Father Patrick Gomes, senior priest and coordinator of the Interreligious Commission in Rajshahi Diocese, said the Church does not offer any incentives to anyone who embraces Christianity.

“Every year, many ethnic brothers and sisters become Catholics out of passion, not greed. They are attracted to the Christian faith thanks to our polite and dignified services and preaching. If they are poor, they get monetary and other support from church groups like Caritas, which is open for poor people from any religion,” Father Gomes told UCA News.

The priest said that those who become Catholics and then return to the old faith “are not Catholics from the heart.”

“Some people become Catholics for social protection and material things. The Church is a minority and is often unable to provide everything. We keep in touch with people and work for justice and peace. It is true that even our best efforts won’t seem good enough for some people,” Father Gomes added.

In Muslim-majority Bangladesh, Christians make up less than half percent of more than 160 million people. There are an estimated 600,000 Christians, mostly Catholics, and about half of them hail from indigenous groups.

Photo : A photo of a reconversion ceremony posted on Facebook triggered a heated debate among Christian and non-Christian Santals in Bangladesh. (Photo supplied)