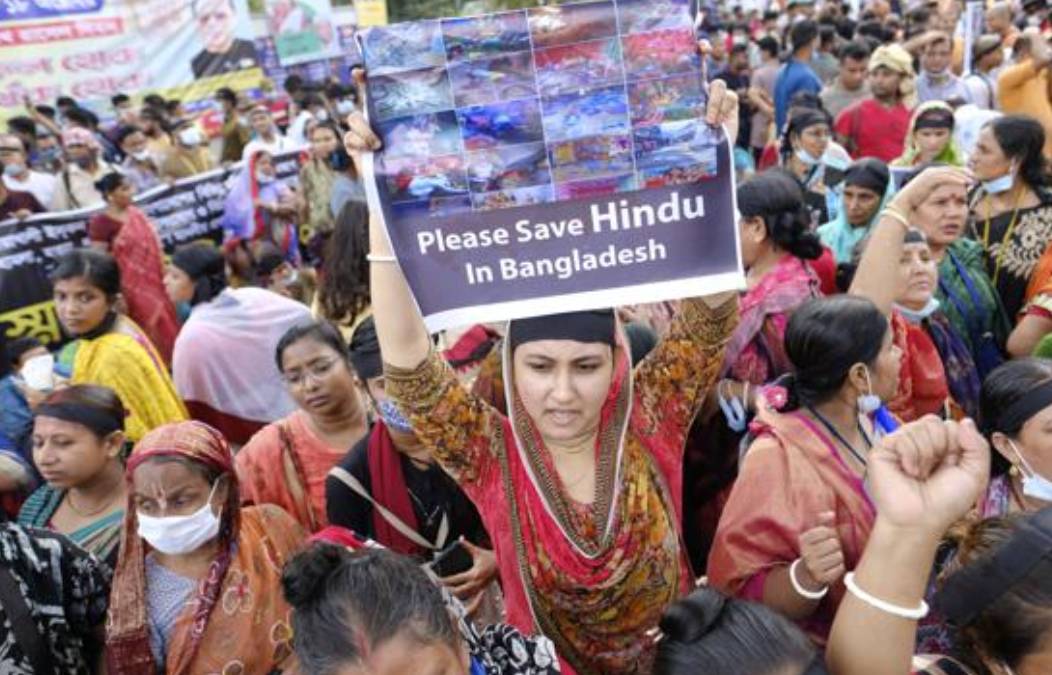 AP News (18.10.2021) – https://bit.ly/3AUvgGa – Protests continued Monday in Bangladesh’s capital to denounce a wave of violence against Hindus following an image posted on social media that was perceived as insulting to the country’s Muslim majority.

New attacks took place Sunday night in a northern village, where unidentified people burned up to 26 homes of Hindus despite a warning by the government that such attacks would be firmly punished.

The violence has prompted the United Nations to urge the government to take actions to stop it.

On Monday, the followers of the Hindu group International Society for Krishna Consciousness were joined by students and teachers from Dhaka University in blocking a major intersection in Dhaka to demand justice. Several other Hindu groups also joined the peaceful protest at the Shahbagh intersection.

Attacks on Hindu temples have intensified since last Wednesday after a photo was posted on social media showing a copy of Islam’s holy book, the Quran, at the feet of a statue at a Hindu temple in the eastern district of Cumilla.

Local media reported that six Hindus were killed in separate attacks, but the figures could not confirmed independently. Local media downplayed their coverage of the violence, apparently under pressure from the government to control any new attacks as Hindus celebrated their largest religious festival, Durga Puja, that ended Friday.

Mia Seppo, the U.N.’s resident coordinator in Bangladesh, said in a Twitter post on Monday that the attacks on Hindus are against the values of the Bangladesh constitution and need to stop.

“We call upon Government to ensure protection of minorities and an impartial probe,” Seppo said. “We call upon all to join hands to strengthen inclusive tolerant.”

Asif Hasan, chief government administrator of northern Rangpur district, said Monday that attackers torched the homes of Hindus in a fishing village on Sunday night. They also stole cash, cattle and other valuables during the attack, he said. Hasan said 42 people were arrested.

On Monday, the Ministry of Home Affairs transferred seven police officials from troubled areas for failing to control the violence.

About 9% of Bangladesh’s 160 million people are Hindu. Bangladesh follows a largely secular legal system based on British common law.

Photo : Hundreds of Hindus protesting against attacks on temples and the killing of two Hindu devotees in another district shout slogans in Dhaka, Bangladesh, Monday, Oct.18, 2021. A viral social media image perceived as insulting to the country’s Muslim majority last week triggered protests and incidents of vandalism at Hindu temples across Bangladesh. About 9% of Bangladesh’s 160 million are Hindus. (AP Photo/Mahmud Hossain Opu)