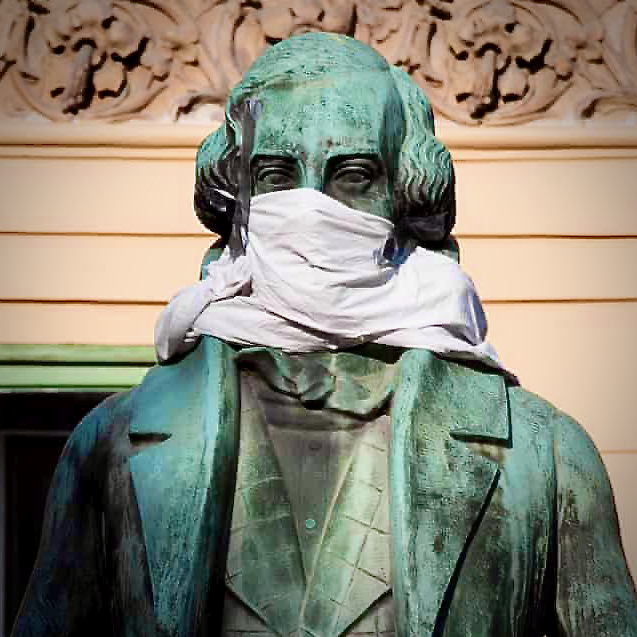 FOREF Europe / HRWF (07.10.2020) – The target of state-run Anti-cult institutions in Western Europe seems to be shifting from religious “heretics” to ideological non-conformists. At least this is the case with Austria’s Federal Office of Sect Issues (Bundesstelle für Sektenfragen). On September 23, the Office released its Annual Report for 2019, which only marginally deals with its traditional target: new religious movements, disparagingly called “sects” or “cults.” Instead, the focus has moved to so-called conspiracy theorists.

The Annual Reports of the Federal Office of Sect Issues usually summarize the Office’s main “activities” from the previous year. Until now, these reports have mostly consisted of an account of how many telephone calls the Office received per year and per gender, and which groups aroused most attention in the local media. However, the latest Report was marked by a different focus than in the past. [1] Because of the pressing public relevance of the subject in the first half-year period of 2020, the Office supplemented its Report with an overview of media coverage dealing with the spread of “conspiracy theories” and “pseudo-medical offers” related to COVID-19. The epidemic first appeared in Austria in February, and—as in many other countries around the globe—caused a controversial debate on the scale of the threat posed by the virus and the appropriate measures to contain it.*

Shaming dissenters: The mechanism of “othering”

A voluminous 40% percent of the Report (that is 59 of 147 pages) presents a number of media articles that are cynical of detractors who have questioned the government measures to curb COVID-19. These ideological non-conformists include both laypersons and medical professionals who are sweepingly branded as “conspiracy theorists.” According to the Report, conspiracy theories are spreading mainly through social networks, in particular through Facebook, YouTube, and blogs that would often promote some form of “alternative medicine” (p. 91). “Radical opponents” against existing vaccines as well as the expected vaccine for SARS-CoV-2 are forming a “conspicuous intersection” between large sections of alternative medicine and conspiracy theorists (p. 92).

The Report’s section on conspiracy theories openly mimics the rhetoric of the World Health Organization, which already in February this year has warned of an “infodemic,” that is, the dissemination of rumors and misinformation that would spread faster than any virus. However, the list of issues that follow underscore what positions the Office consider especially questionable, revealing a peculiar order of priorities. First, the Report attacks the assumption that SARS-CoV-2 may originate from the Wuhan Institute of Virology, putting it into the corner of conspiracy theories. Such claims would implicate that the “Chinese regime” (put in quotation remarks) had intentionally released the virus. In this context, coverage by the Epoch Times and the Washington Times—both newspapers have repeatedly voiced ardent criticism of the Chinese Communist Party’s (CCP) human rights abuses in the past—was particularly targeted (pp. 94-99).

Meanwhile, the whistleblower Dr. Yan Li-Meng has been corroborating the assertion that the virus came from a lab of the People’s Liberation Army, which complicates matters. [2] Dr. Yan was a virologist employed as a researcher at the University of Hong Kong’s School of Public Health at the outset of the COVID-19 pandemic and now lives in exile in the United States. As long as China refuses to let independent researchers into the country, the question of the origin of SARS-CoV-2 remains far from settled—a fact that the Report fails to take into account. [3] [4]

Second, the Report dismisses as “fake news” any suspicion that the 5G network spearheaded by the tech company Huawei could lead to negative health effects or that it helped the spread of COVID-19 (pp. 100-102). However, what the Report omits to mention is another perhaps more urgent reason why fears of 5G are going viral: Huawei has evident ties to the CCP and the Chinese military. [5] [6] The United States, and subsequently the United Kingdom, India, Australia, and even Singapore have banned (or reduced) the use of Huawei’s 5G technology, citing security concerns. By contrast, 5G networks in Germany, Switzerland, and Austria were built with equipment provided by the company and have been in operation since 2019. The  German-speaking countries prefer a policy of “technological neutrality” and “change through trade” (Wandel durch Handel) in their relations to China, that is, looking the other way when human rights concerns are addressed. [7] [8] [9]

A third area of views which the authors deem as conspiracy theories are those critical of the activities of the American business magnate and philanthropist Bill Gates (pp. 110-114). The Report mentions by name the physician Dr. Michael Spitzbart, who posted his doubts about the “alliance between WHO, the Bill & Melinda Gates Foundation and the vaccine industry (Gavi)” on Facebook. The authors of the Report do not further engage with Dr. Spitzbart’s statements, for which they do not have the necessary medical background. And neither is this the place to evaluate the merits or demerits of Gates’ global vaccine programs. However, when medical professionals who publicly raise their doubts about the utility of insufficiently tested vaccines are listed in the Office’s Report without any comment, a line has been clearly crossed. What should give rise to concern is that the mere association of individuals with cult-like groups—whatever one imagines them to be—will have immense consequences for their professional reputation. This kind of shaming technique is reminiscent of the totalitarian prescription “punish one, teach a hundred,” attributed to Mao Tse-Tung.

Is the Austrian government pursuing some sort of “enlightenment from above” at the expense of a free and open inquiry? Do Austrian taxpayers need an Orwellian “Ministry of Truth” to present them with a selection of trustworthy media reports and a public list of heretics, dissenters, and scapegoats? To mitigate the spread of conspiracy theories the use of state-funded reports may backfire if the distinction between facts and fiction proves to be a distinction between privileged and less privileged knowledge. This is the case where the Report refers to and even recommends fact-checkers that are financially backed by large foundations with obvious political agendas, for example correctiv.org. If charitable foundations sponsor journalists to publish certain narratives, who will critically examine those foundations?

Sociologists and journalists have repeatedly warned of the conflicts of interests and the loss of journalistic impartiality that will result from the dependence on “philanthro-capitalism,” that is, the controversial entanglement of philanthropy and for-profit investments through global foundations. [10] [11] As any other theories, conspiracy theories must be confronted with healthy skepticism and a methodologically sound examination of the facts. However, the salient pattern that emerges from the Report of the Federal Office of Sect Issues is that big governments and big foundations are above criticism: “Nothing to see here, move along!”

With the revolution of the internet came an exponential growth of information. But information is not the same as knowledge, for the production of knowledge requires critical discourse. Total objectivity may thus always remain an unobtainable ideal. However, only the preservation of free speech will guarantee the possibility for open-ended inquiry, not its curtailment. If persons holding dissenting views are stigmatized, the already existing echo chambers will increasingly ossify, thus amplifying one-sided views and prejudice. State-endorsed ad hominem strategies and mechanisms of “othering” ultimately stifle the pursuit of truth in a climate of public fear.

Methodologically unsound, unconstitutional from the outset

The Annual Report of the Federal Office of Sect Issues leaves several questions unanswered. What exactly is the Office’s legal mandate to monitor “conspiracy theorists,” the “freemen movement” (Staatsverweigerer), “esotericists,” “self-help offers,” or “alternative education concepts” apart from “alternative religious and spiritual movements” (p. 13)? Is it the objective of the Office to inform the public or rather to threaten dissenters? Once a professional is mentioned in the Office’s publications by name, he or she is stigmatized as a “cultist” (Sektierer) and may suffer considerable reputational damage. Why do some passages of the Report eerily read like a defense of global foundations or the Chinese government?

The Austrian public finances the Office with a budget of 600,000 EUR annually. Austrian taxpayers have a right to know why exorbitant amounts of public funds are invested into a methodologically unsound project. While the entire Report only relies on the narratives of leading media outlets (ORF, Kurier, Standard), it omits any reference to academic studies or investigative research. If the state gets to decide which opinions are acceptable, a free and open public discourse on controversial issues is at stake. Arguably, the partisan stance of the Office and its aggressive all-round defamation of critical voices raises suspicion whether it is being slowly transformed to become a mouthpiece for CCP-style propaganda. In any case, the Office is exceeding its competencies beyond all measure when it pretends to be an arbiter of right and wrong opinions.

In recent years, the Office has repeatedly come under public scrutiny, amongst others by the Court of Audit (Rechnungshof). [15] The Court of Audit has questioned the Office’s lack of transparency regarding its methods and results. Launched in 1998 by conservative hardliners, the Federal Office of Sect Issues is subject to the Federal Ministry of Labour, Family and Youth (Bundesministerium für Arbeit, Familie und Jugend). During the two decades of its existence, Prof. Christian Brünner, constitutional expert and co-founder of FOREF Europe, has been repeatedly suggesting to revoke the law for the establishment of the Office because of its violation of fundamental freedoms. Brünner proposed to introduce an information center fashioned after the British model of INFORM instead. INFORM, founded by British sociologist Dr. Eileen Barker as a registered charity in 1988, offers objective, impartial, and up-to-date information on new religious and worldview movements based on established sociological methods.

Conspiracy theories should never be taken at face value. But to avoid an inflation of the term to encompass any kind of dissent, clear definitions, nuance, and a serious scholarly approach are necessary. It is evident that the Federal Office of Sect Issues falls short of this standard in all respects.

*According to the statistics provided by Austria’s Federal Ministry of Health, 1,6% of persons with a confirmed infection by SARS-CoV-2 have died (as of October 4). The health ministry explicitly stresses that the number of COVID-19-related deaths, also known as the case-fatality rate, does not account for whether the virus was the actual cause of death. Thus, the number of deaths directly caused by SARS-CoV-2 is expected to be lower. For comparison, Ebola has an estimated case fertility rate of 40-50%, MERS-CoV 34%, and the seasonal flu 0,1-0,2%. [12] [13]

[4] The Trail Leading Back to the Wuhan Labs (National Review, April 3, 2020): https://www.nationalreview.com/2020/04/coronavirus-china-trail-leading-back-to-wuhan-labs/.

[6] The giant that no one trusts: why Huawei’s history haunts it (The Guardian, December 08, 2018): https://www.theguardian.com/technology/2018/dec/08/the-giant-that-no-one-trusts-why-huaweis-history-haunts-it.

Photo: Johann Nepomuk Eduard Ambrosius Nestroy (7 December 1801 – 25 May 1862) was a singer, actor and playwright in the popular Austrian tradition of the Biedermeier period and its immediate aftermath. He participated in the 1848 revolutions and his work reflects the new liberal spirit then spreading throughout Europe.