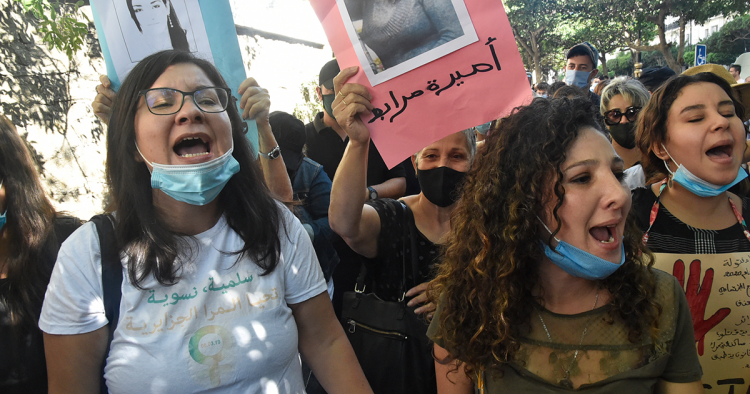 Middle East Institute (08.02.2021) – https://bit.ly/3fd4Wz1 – On Jan. 26, an Algerian journalist from the public channel TV4 Tamazight, Tinhinane Laceb, was murdered by her husband. Just two days earlier, on Jan. 24, Warda Hafedh, a 45-year-old mother of five, was murdered by her spouse. Warda was hit in the head three times with a hammer and stabbed in the heart five times. The attack took place in front of her six- year-old daughter.

Tinhinane and Warda are but two victims among many. Last October, the story of Chaïma, a 19-year-old who was kidnapped, raped, beaten, and burned alive in the small town of Thénia, made headlines. The poignant video of Chaïma’s mother calling on President Abdelmadjid Tebboune to order the death penalty against her daughter’s killer gave rise to a debate on social media over its use. The death penalty is still on the books in Algeria but has been suspended since 1993 following a moratorium. According to local media, President Tebboune called for the application of a “maximum sentence without the possibility of relief or pardon.”

Chaïma’s murder and other recent killings have sparked outrage across Algeria. Many Algerians have expressed their anger on social media over this dangerous trend of violence against women, with the hashtag #WeLostOneOfUs trending on Twitter. In Algiers, Béjaïa, Constantine, and Oran, hundreds of women defied pandemic lockdown restrictions to protest and voice their anger over the increase in femicides in the country and the state’s inertia.

Femicide and other gender-based violence are turning into a real public-health crisis. There are no comprehensive statistics available on gender-based violence and femicide in Algeria; however, figures published annually by the Directorate General of National Security (DGSN) and the Gendarmerie are worrying as they represent only the tip of the iceberg. Recent statistics from the police, as reported by Algerian media, indicate that more than 7,000 cases of violence against women were recorded in 2018. As for femicide, according to the only available resource, “feminicides-dz,” a website created by two feminist activists tracking the phenomenon and aimed at making the victims’ faces and stories known, 75 women from all backgrounds and ages (up to 80 years old) died at the hands of their intimate partners, fathers, brothers, brothers-in-law, sons, or strangers in 2019, and another 54 in 2020.

While the Algerian state has implemented long-overdue legal and institutional reforms to promote and protect women’s rights since 2014, such measures have been unable to protect women against violence in general and domestic violence in particular. Corporal punishment of women by their husbands or male relatives is widespread and accepted in society as a method of discipline. In addition, stigmatization and hostility from society and police enforcement toward women who complain about or report domestic violence are also severe obstacles to women’s protection as well. Successive governments have failed on two fronts: on the one hand, in making a comprehensive law to enhance women’s protection and prevent domestic violence, and on the other, to provide survivors and their children with adequate support services.

The laws — and their flaws

To better protect women, in 2015 the Algerian legislature put in place a law criminalizing sexual harassment, expanding its scope, and strengthening penalties for it. The law also amended the penal code to criminalize domestic violence. For the first time in Algeria, following the implementation of the 2015 law, violence within the family can be prosecuted under Articles 264 to 276 of the penal code, which prescribe penalties ranging from fines to imprisonment. This law made assaulting a spouse punishable by up to 20 years in prison for injuries and a life sentence for injuries resulting in death (Article 266 bis). However, for several reasons, this law fails to fully protect women and end violence against them.

First, the law applies only to spouses and ex-spouses living in the same or separate residences, but does not apply to relatives, unmarried couples, or other members of the household. Provisions on assault and psychological or economic violence do not apply to an individual in intimate non-marital relationships or to family members or members of the same household.

Second, in Article 264, there is a penalty of one to five years in prison and a fine for violent acts that lead to illness or an incapacity to work for more than 15 days. However, a medical certificate is required to prove this, hindering survivors’ access to justice and, by extension, to their perpetrators’ prosecution. In addition, violent acts that do not incapacitate the victim for more than 15 days are considered misdemeanors, except if premeditated (i.e., an ambush) or if a weapon is used (Article 266).

Third, the law does not forbid mediation and conciliation; moreover, a perpetrator may even receive a reduced sentence or avoid punishment altogether if pardoned by a spouse (n° 15-19, 2015: Article 266 bis, 266 bis 1, 330 bis). There is often considerable social and family pressure on the victim to pardon her attacker and this may dissuade her from seeking court remedies in the future. Another obstacle women encounter besides social pressure is lousy treatment by the police, who are frequently dismissive, discourage them from filing complaints, and lack due diligence and follow-up when carrying out an investigation (if there is one).

In addition, there is no provision for a protective order, known as a restraining order, to protect the victim and improve the prosecution of her case. There are also no provisions preventing an alleged abuser from calling the victim or requiring them to remain a certain distance away from her or even to move out of a shared residence. As a result, the victim can be subject to harassment in the best case and retaliation in the worst.

According to emailed comments from Nadia Aït Zai, a feminist activist and founder of the Center for Information and Documentation on the Rights of Children and Women (CIDDEF), “There is indeed a law now on domestic violence, but this is not enough. We have been asking for protection mechanisms, protective orders, as well as a special counter dedicated to the victims from the moment they arrive at the police station until their departure, and even the possibility to place them [in a shelter] immediately if need be.”

Fourth, the penal code recognizes “crime of passion,” and Article 279 provides that a person who kills or injures their spouse benefits from mitigating circumstances if their spouse was caught in the act of adultery.

Finally, while women can divorce their husbands if they are violent toward them, marital rape is not recognized. The law on domestic violence does not mention it, even though the figures are alarming. A national survey published in 2005 reported that 10.9% of Algerian women interviewed said they had been subjected to forced sexual intercourse by their intimate partners. This number went up to 14% in a 2013 study conducted by the Balsam network, a national network of listening centers for women victims of violence.

These legal shortcomings should be addressed urgently by the Parliament through further legislation.

Institutional mechanisms like the Ministry for National Solidarity, Family, and the Status of Women and the National Council for the Family and Women are examples that illustrate the state’s commitment to fulfilling its due diligence obligations in the areas of gender equality and non-discrimination. Under the ministry’s coordination, in 2007 Algeria launched the National Strategy on Combating Violence Against Women. The strategy called for creating special units to help survivors of violence find longer-term shelters — without covering the actual establishment of these shelters. At present, there are two national state-run shelters (Bousmail and Mostaganem) and five temporary accommodation centers (Algiers, Constantine, Oran, Skikda, and Ouargla).

As there is no budget explicitly devoted to dealing with gender-based violence, the viability and accessibility of shelters and accommodation centers for women victims of violence remain a major challenge. This seems to be an issue for the broader MENA region as well, as the total number of shelters in the Arab states does not exceed 50. In Algeria, this translates into limited and inadequate services such as legal aid, health assistance, psycho-social support, and above all shelters. These services are nearly all provided by nongovernmental organizations (NGOs), most of which receive no state support.

Shelters and accommodation centers lack resources, funds, and space. For instance, in 2017, several centers had to turn women away due to lack of space. Many women have also been turned away because they did not meet the criteria of shelters or accommodation centers or because there were restrictions on under-age children who accompanied them. Moreover, women victims of emotional abuse are not accepted as these institutions recognize only certain forms of violence.

In addition, many shelters and centers lack employees and have to rely heavily on volunteers due to their limited funds. There are few professionals in these shelters and the lack of a code of conduct on how to interact and work with survivors makes the volunteers’ job harder. However, these centers do have reintegration officers to support women after their stay for up to two years, which is critical for survivors.

Half of the centers in Algeria include reconciliation services, calling into question the principles of women’s safety, security, and confidentiality. Reconciliation can be extremely dangerous and put women at significant risk. The reconciliation approach does not consider the imbalance of power between the survivor and the perpetrator, or the familial and social pressure on women to safeguard the family at any cost.

Patriarchy and the pandemic

Femicide is a global issue that cuts across borders, cultures, religions, classes, and ages. However, in the “belt of classic patriarchy” of which the MENA region is part, rates of sexual and gender-based violence are continuing to rise, especially since the onset of the COVID-19 pandemic. Algeria is no exception in this regard. Data from the DGSN shows an increase in physical violence (71%) and an upsurge in femicides. In the first two months of 2020, 6 women were killed by their husbands — and a further 19 from March to October.

While the Algerian state, like many others in the region, debates human security and the protection of the most vulnerable, it is this very same state that put women and children at risk. The state is implicated in women’s oppression and their reduction to objects of masculine social control. Through this ideological construct, structural and direct violence against women is justified. The gendering of the private sphere is what makes home a realm outside of the state’s influence and under the regulation of the man. The latter is granted control over the defense of the house’s sanctity and the women’s body. As long as this patriarchal view prevails within Algeria’s state and society, it will cast shame and stigma on women victims of violence, Algerian women will continue to be killed, and their perpetrators praised.

Dr. Dalia Ghanem is a resident scholar at the Carnegie Middle East Center in Beirut, where her work examines political and extremist violence, radicalization, Islamism, and jihadism with an emphasis on Algeria. The opinions expressed in this piece are her own.