ALGERIA: Violence against women exposed at the UN in Geneva 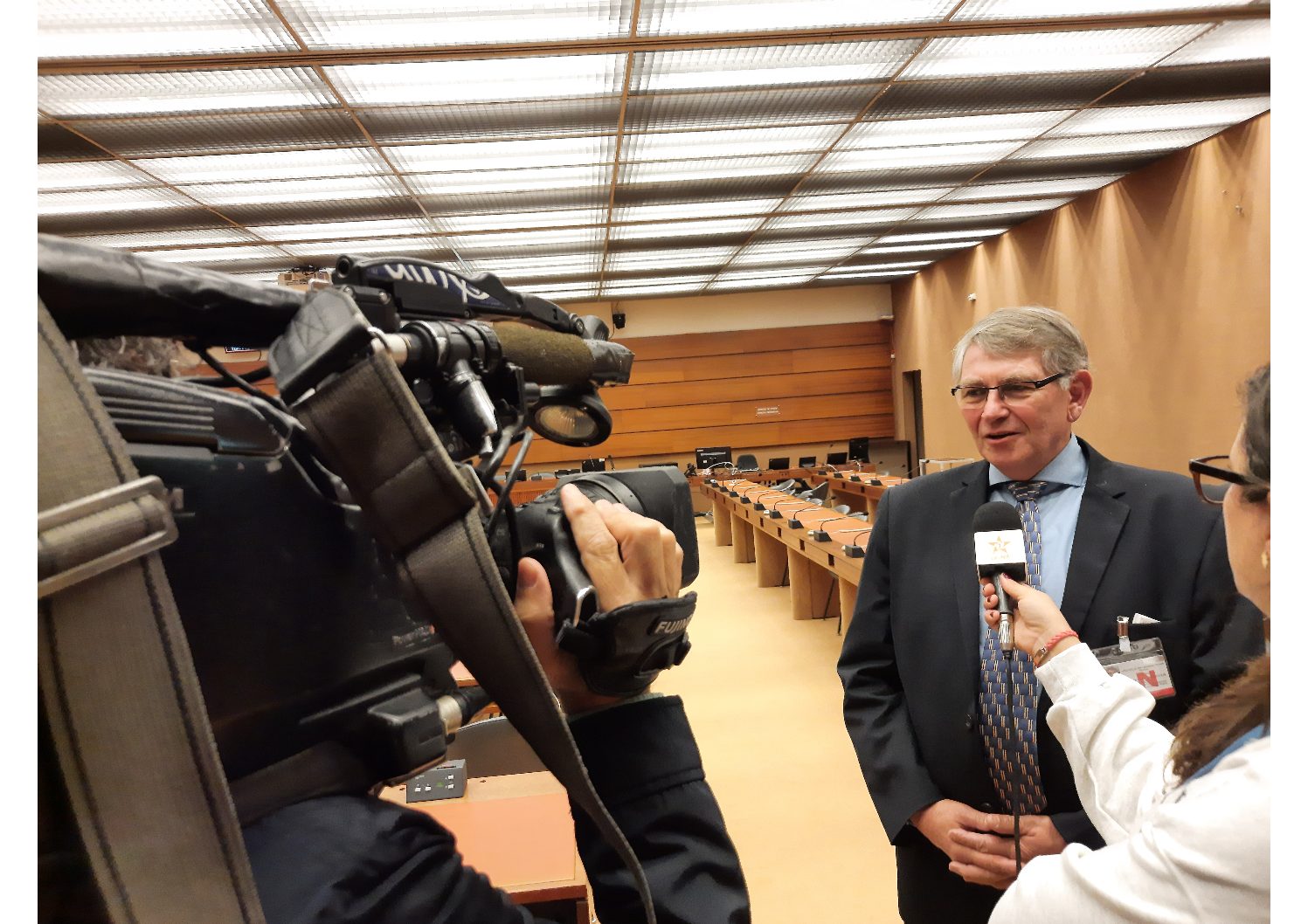 Violence against women exposed at the UN

HRWF (10.11.2022) – On 11 November, Algeria’s human rights report will be examined by the UN Human Rights Council in the framework of the Universal Periodic Review (UPR). On the eve of this hearing, a side-event related to this issue was organized two days before at the UN in Geneva. HRWF’s representative, Hans Noot, who was one of the panelists, addressed the rape issue in Algeria. Here is the text of his paper:

“Last month, Human Rights Without Frontiers, which I represent here today, was invited to a hearing by the European Parliament to share its expertise on the issue of violence against women as an abuse of power. One aspect of the issue was dealing with sexual abuse by political leaders. I will today address the general issue of violence against women and rape in Algeria and conclude with one concrete example concerning a political leader.

Since the beginning of the last decade, things have been evolving positively for women in Algeria at the legal level but a lot still needs to be done concerning violence against women and rape, in law and in social attitudes.

In December 2015, Algeria’s Parliament adopted Law no.15-19 which criminalises certain forms of gender- based violence, including domestic violence, sexual harassment, harassment in public spaces, verbal harassment and psychological violence, as well as establishing penalties for assault against a spouse or female family members.

Amendments to the Penal Code, adopted in December 2015, criminalized physical and psychological violence against a spouse as specific offences, and broadened the existing provisions on sexual harassment.

However, the amendments still allow spouses responsible for violence to escape prosecution if the victims forgive them. This opens the door to pressure the victims and their families into withdrawing complaints.

In addition, article 41 of the labour code identifies cyberviolence and online harassment as criminal actions.

Most notably, the Family Code which, as aforementioned, governs ‘private’ matters, contains no provision relating to domestic violence. According to one Algerian newspaper, in this respect the Family Code can be seen as the foundation for legitimating violence within the family and the domestic sphere.

Algeria should remove the forgiveness procedure from its legal provisions and should also provide services and access to justice for victims by specially trained professionals which are safe, legal, sensitive and confidential. Medical and psychological services dealing with the post-traumatic impact of sexual violence should also be available.

A higher level of violence against women is rape.

In Algeria, rape is not clearly defined. It is limited to a man having sexual relations with a woman against her will. It is only severely punished when it involves ‘penetration of the vagina by a male genital organ’ but does not cover the use of an object or the penetration of other orifices, nor the rape of small boys, for which the term “indecent assault” is used.

Article 336 of the Criminal Code provides for a sentence of 5 to 10 years in prison in case of rape but when the victim is a minor – less than 18 years old, the sentence is doubled: 10 to 20 years in prison. Articles 337 and 337bis provide for the same sentence when the rape is perpetrated by a member of the family. However, spousal rape is not criminalized and the perpetrators remain unpunished. A law and amendments to the Criminal Code are therefore needed to cover this issue.

Moreover, the law emphasizes ‘morality’ and ‘decency’ rather than the physical and psychological integrity of the victim, their protection and prevention against repeated assaults.

Another type of victims failing to be protected by law and in practice should also be given some visibility. As consensual sexual relations outside marriage and same sex relations are criminalised in Algeria, this may stop victims of sexual violence from coming forward for fear that they might be prosecuted if their allegation of rape is not believed.

Algeria does not have protection orders or systems, which leaves women exposed to violence and threats of retaliation when they seek help. Algerian law focuses almost exclusively on the criminalisation of gender- based violence.

In conclusion of this issue, Algeria should put an end to discriminatory rape laws and protect survivors of sexual violence. Decriminalising sexual relations between unmarried consenting adults and same-sex sexual relations would also facilitate the care for the victims by state and private institutions.

Abduction and rape of a female minor

Abduction and rape of a minor girl is another serious issue in practice.

Article 326 of the Criminal Code states that anyone who, without violence or threat, ‘abducts’ or ‘kidnaps’ a minor under 18 years of age is liable to 5 years’ imprisonment. However, rapists can avoid prosecution by marrying their teenage victims and if the girl’s family does not press charges.

At present, a whole reflection is underway on this subject, and more particularly on the abrogation of this article 326. Once this is done, judges will have to refer to the prohibition of marriage before the age of 19 and the obligation of consent of the spouses. At present, judges have to produce an order each time they want to authorize the marriage of a minor to her abductor. This is a way of enshrining rape and the impunity of the rapist to preserve the honor of the family. The suffering of the victims, on the other hand, is ignored and they are condemned to live with their rapist.

In conclusion of this section, Algeria should repeal provisions that allow rapists to avoid prosecution by marrying their teenage victims.

The case of Khadiyatu Mohamud

Sexual abuse and rape of women by men in power in a patriarchal context, in a religious context, in a professional context, in the world of sports, in the economic and political world is another widespread but mostly hidden issue.

In all countries of the world, political leaders have abused their power in their relations with women and girls, and have enjoyed total impunity. This was recently the case with a minister in France, with a former head of state in Gambia and also with the president of Zimbabwe, just to name a few examples. Algeria is no exception to the rule.

For years, Khadiyatu Mohamud has been unsuccessfully accusing the head of the Polisario Front, Brahim Ghali, of rape.

Who is that Brahim Ghali? He is a Sahrawi politician based in Algeria. He serves as the current president of the Sahrawi Arab Democratic Republic (SADR). He is the Secretary General of the Polisario Front.

Ghali has served as a historic figure and played a key role in the struggle of the Sahrawi people in Algeria for self-determination and independence from Morocco.

In 2013, Khadiyatu Mohamud filed a complaint against him for rape and sexual abuse in Spain, where she was living.

She was then 18 years old and was working as an interpreter for the Polisario.  She had then been invited by an NGO in Italy. For that purpose, she needed the authorization of the diplomatic representation of the Polisario in Algeria as a necessary first administrative step before asking for a visa from the Italian embassy. In his office in the evening, Ghali blackmailed her, she said: a visa in exchange of sexual services. She refused but she was raped. Her mother, a traditionalist woman, told her not to make it public because nobody would ever want to marry her while her brother encouraged her to lodge a complaint. It took her three years to decide to file a complaint when she was in Spain but it was shelved.

But in 2021, Ghali went to Spain to recover from a critical health state due to COVID-19. Khadiyatu Mohamud used that opportunity to call upon the Spanish authorities through the media to remove her complaint from oblivion but Madrid remained deaf to her complaint. However, at that time, the Asociación Saharaui para la Defensa de los Derechos Humanos managed to get the reopening of a lawsuit against Ghali for alleged torture, that had been provisionally dismissed. On 19 May 2021, the Spanish Audiencia Nacional summoned him to testify as a defendant in the torture case presented by the Spanish NGO. Unfortunately, the judge Santiago Pedraz determined the accusing parties had not brought any evidence of Ghali’s culpability. Shortly afterwards, Ghali left Spain in total impunity and went back to Algeria.

In Algeria, the authorities have always failed to process or even just consider the rape case of Khadiyatu Mohamud for obvious political and geopolitical reasons. According to the Algerian legislation, Brahim Ghali should have been sentenced to a prison term of 5 to 10 years but he has never been prosecuted.”