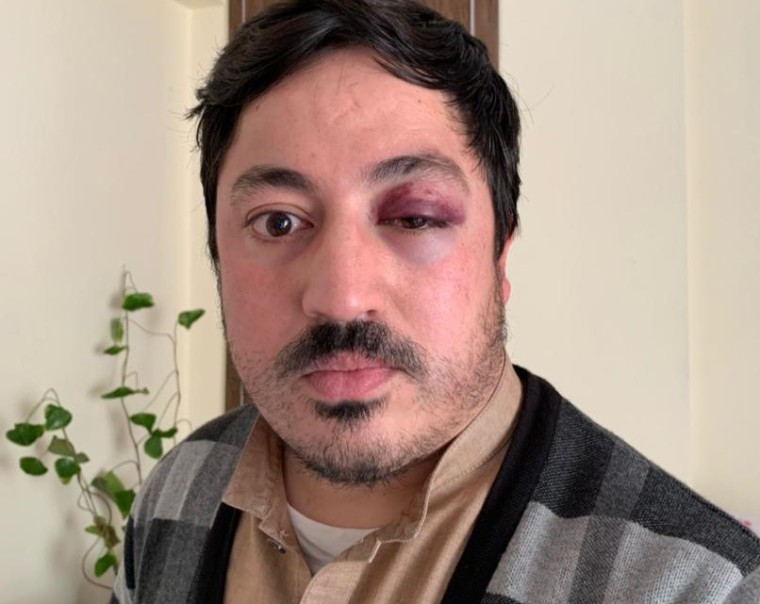 At about 4:50 p.m. on January 10, three unidentified men pulled up next to Hashemi, deputy director of the nonprofit media outlet Salam Afghanistan Media Organization, while he was driving home in the capital, Kabul, and one of them exited their car and attacked him, according to the journalist, who spoke to CPJ in a phone interview, and reports by his organization and other news and advocacy organizations.

The attacker, who carried a pistol and whose face was covered, forced Hashemi out of his car; the journalist offered the man his car keys and license, but the man refused and started searching the car, according to Hashemi and a video of the incident, which CPJ reviewed.

The attacker pointed his gun at Hashemi and pulled the trigger, but the gun did not fire; the journalist grabbed the pistol and hit the attacker on the head with it, and the man punched Hashemi in the eye, he said.

When Hashemi shouted for help, the attacker returned to the car with the two others and fled the scene, the journalist said. Hashemi told CPJ he did not believe the attack was a simple robbery attempt due to the assailant’s refusal to take his car when he offered it.

“Months after the Taliban takeover of Afghanistan, the assault on Noor Mohammad Hashemi is part of a disturbing trend of attacks on the media,” said Steven Butler, CPJ’s Asia program coordinator in Washington, D.C. “The Taliban must show its commitment to media safety by thoroughly investigating this attack, determining if it was related to Hashemi’s journalism, and holding the perpetrators accountable.”

Hashemi sustained a bruise to his eye and has pain in his back, he told CPJ.

Ahmadullah Wasiq, a Taliban deputy spokesperson in Afghanistan, did not respond to CPJ’s request for comment sent via messaging app.

The Salam Afghanistan Media Organization’s offices and reporters have previously been threatened and attacked, as CPJ has documented. On September 18, 2021, an unidentified man shot Mohammad Ali Ahmadi, a reporter and editor with the Salam Watandar broadcaster, which is owned by the SAMO. On September 26, two armed men forcibly entered Salam Watandar’s office in Kabul.