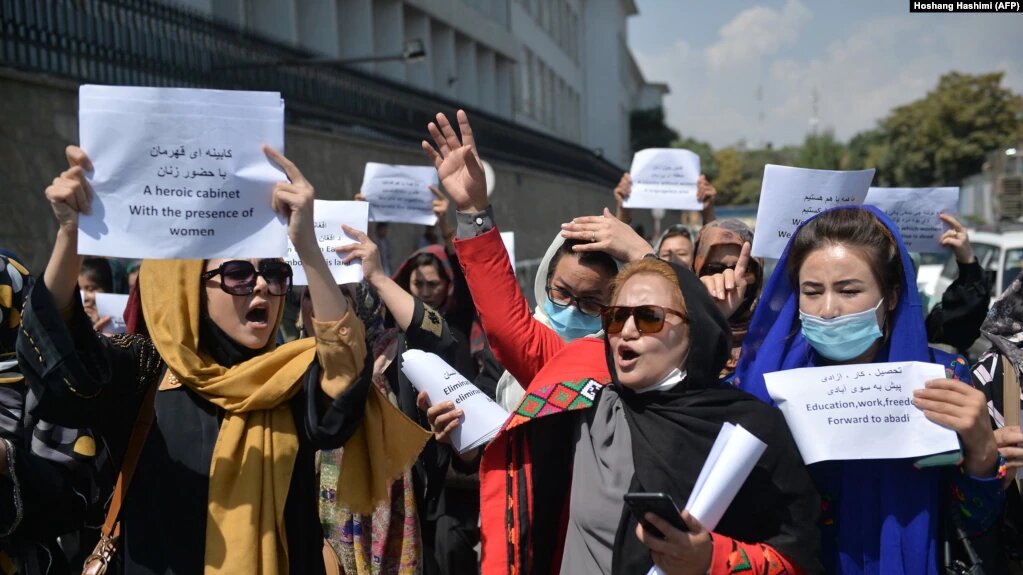 RFE/RL’s Radio Azadi (03.09.2021) – https://bit.ly/3jRzfOE – The Taliban has imposed a new dress code and gender segregation for women at private universities and colleges in Afghanistan, in line with a decree issued to educational institutions and obtained by RFE/RL.

All female students, teachers, and staff must wear an Islamic abaya robe and niqab that covers the hair, body, and most of the face, according to the extensive document issued by the Taliban-run Education Ministry on September 5. The garments must be black, the text added, and women must also wear gloves to ensure their hands are covered.

Classes must also be segregated by gender — or at least divided by a curtain — according to the order, which added that female students must be taught only by other women. But it added, though, that “elderly men” of good character could fill in if there were no female teachers.

Since seizing power after the collapse of the internationally recognized government in Kabul last month, the Taliban has said “women and girls will have all their rights within Islam.”

The militants have attempted to project a more moderate image and reassure Afghans and the world that it has changed. During its brutal regime from 1996-2001, the Taliban oppressed women and severely restricted girls’ education.

But the Taliban’s new rules — which came into effect on September 6 as private universities reopened — highlight how women’s lives are set to dramatically change under the rule of the hard-line Islamist group after the gains of the past 20 years.

“The new changes like gender segregation in schools and universities are clearly creating more fear and a culture of discrimination against women and girls,” said Samira Hamidi, an exiled women’s rights activist who fled Afghanistan due to threats by the Taliban.

“Women wearing black veils do not represent Afghan culture,” she added. “It is a clear sign of repression in the life of women and girls.”

Before the Taliban’s return to power, Afghan women studied alongside men and attended classes with male teachers. There was also no dress code that forced women to cover themselves.

But women are now confronted with a new, harsher reality.

Photos widely shared by Afghans on social media showed men and women at Ibn Sina University, a private institution in Kabul, separated in classes by a curtain. Many of the women pictured wore black robes and hijabs, although their faces were visible — an apparent violation of the new dress code.

According to the decree issued by the Taliban, women should wear an abaya, the figure-shrouding outer garment, and niqab, a cloth that covers the face except for the eyes.

Maryam, a woman from the southeastern city of Khost, told Radio Azadi that many women were ready to wear a hijab, which covers the head. But she said the all-encompassing niqab or burqa would not be “acceptable to Afghan women.”

The Taliban also imposed the wearing of burqas in the 1990s.

The Taliban’s decree also said men and women should use separate entrances and exits at universities and colleges.

“Universities are required to recruit female teachers for female students based on their facilities,” the document said.

If it is not possible to employ female teachers, then institutions “should try to hire elderly men teachers who have a record of good behavior.”

While women must study separately, they are also required to finish their classes five minutes earlier than men to stop them from meeting outside.

The documents also stipulates that women must remain in waiting rooms until their male classmates have left the building.

Despite the new restrictions, the Taliban permitting education for women is a positive, said 18-year-old Salgy Baran, who received the highest score in Afghanistan on her university entrance exams this year.

“The Taliban must deliver on what they promise,” she told Radio Azadi, referring to the militant group’s pledge to protect women’s rights, including the right to education. “Our university professors must be encouraged and appreciated, and we must be optimistic about the future.”

But others are not convinced that the Taliban has changed and will permit women to exercise their right to education and work.

After the U.S.-led invasion, university admission rates soared in Afghanistan, particularly among women. Millions of girls of all ages also flocked back to school, though the gains in female education were mainly restricted to the cities.

Women also played a role in public life as ministers, members of parliament, and provincial officials. They also had the right to vote and work outside their homes.

When it previously controlled Afghanistan from 1996-2001, the Taliban forced women to cover themselves from head to toe, banned them from working outside the home, limited education only to pre-adolescent girls, and required women to be accompanied by a male relative if they left their homes.

The Taliban has, thus far, reimposed many of the same repressive laws and retrograde policies that defined its extremist former rule.

In Kabul, the Taliban has advised women to largely remain indoors. The militants have dismissed female journalists working for state-run television. The Taliban has also ordered many former female government workers not to return to work even as their male colleagues went back. Many girls’ schools have also remained shut in the capital.

Scores of women have staged protests in Kabul, the western city of Herat, and the northern city of Mazar-e Sharif in recent days, demanding equal rights.

Protest organizers said Taliban militants violently dispersed a crowd of women who had taken to the streets of Mazar-e Sharif on September 6 to call for their rights to be preserved and their inclusion in the new government.

Dozens of women held placards with slogans such as “Violation of women’s rights = Violation of human’s rights” and “We want political participation at all levels,” according to photos shared on social media.

Frud Bezhan covers Afghanistan and Pakistan, with a focus on politics, the Taliban insurgency, and human rights. He has reported from Afghanistan, Kosovo, and Turkey. Prior to joining RFE/RL in 2011, he worked as a freelance journalist in Afghanistan and contributed to several Australian newspapers, including The Age and The Sydney Morning Herald. BezhanF@rferl.org