AFGHANISTAN: Misogynistic policies: How have women coped under the Taliban? 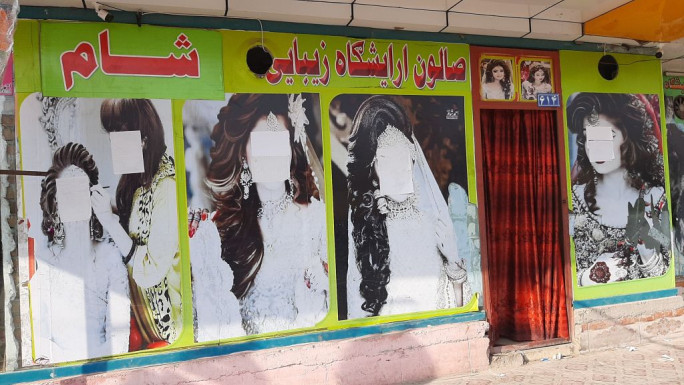 Misogynistic policies & Men-only meetings: How have women coped under the Taliban?

After the Taliban swept to power in Afghanistan, press conferences were convened in which Talib spokespersons assured the international community that women’s rights would be respected, within the confines of Islam. But how have women actually fared?

The New Arab (14.10.2021) – https://bit.ly/3E67fhr – Soon after the withdrawal of US troops, Afghanistan was swiftly taken over by Taliban fighters in August this year. During their previous government from 1996 to 2001, the Taliban had stopped girls from going to school while women could not continue with their jobs and were not allowed to leave home without a male chaperone. In case of resistance, people were often flogged and beaten.

Faced with uncertainty, Afghan women now find themselves back from where they started twenty years ago, all the gains and small freedoms they acquired in that time are gone in a single stroke. This time, however, Taliban spokesman Zabihullah Mujahid, promised in his very first presser that they would “honour women’s rights within the norms of Islamic law.”

Following this statement, girls in primary schools in Kabul were allowed to attend classes while a female news anchor even interviewed a Taliban official. But then erratic incidents started happening such as a female news anchor being sent back home and told she was not permitted to work, or when female students and professors were sent home in Herat.

“The international community should communicate to the Taliban that an entity that denies girls access to secondary education, denies women access to most employment, and includes zero women in senior levels of their government, will never be seen as legitimate in 2021”

Terming the current state of women and human rights situation in Afghanistan as “disappointing”, Qatar’s Foreign Minister Sheikh Mohammed bin Abdulrahman Al-Thani stated, “The recent actions that we have seen unfortunately in Afghanistan, it has been very disappointing to see some steps being taken backwards.”

At a presser along with top diplomats from the European Union (EU), Al-Thani also said, “We have also been trying to demonstrate for the Taliban how Muslim countries can conduct their laws, how they can deal with women’s issues.” Ever since the Taliban took over Afghanistan, Doha has been helping with airport handling and evacuation efforts and has tried to exert some influence over the new interim government to make it more liberal.

As many senior Taliban leaders have lived in Doha due to the Afghan peace process since 2015, the Qatar government had expected them to learn from its own encouraging progress in the field of women empowerment even though it is an Islamic country. In Qatar, women outnumber men in most professional sectors and university education nowadays.

But more countries need to pressure the Taliban on women’s rights.

As Heather Barr, Associate Director of the Women’s Rights Division and former Afghanistan researcher at Human Rights Watch told The New Arab, “Unfortunately, it seems like the Taliban are on track to implement most of the misogynistic policies they imposed from 1996 to 2001, and they are facing little push-back from the international community beyond lip service. I am particularly struck by how many governments are going to meet the Taliban without women – and we have no idea whether women’s rights are even a topic of discussion in these men-only meetings.”

In which ways do Afghan women stand to get affected by the current scenario?

First, women’s education has been badly hit. As per USAID, just one year before the Taliban takeover, girls constituted 40 percent of the 9.5 million students in the country. Even though the Taliban have tried to be more moderate compared to their last period of rule, there seems to be very little deviation from their past stance.

“Unfortunately, it seems like the Taliban are on track to implement most of the misogynistic policies they imposed from 1996 to 2001, and they are facing little push-back from the international community beyond lip service. I am particularly struck by how many governments are going to meet the Taliban without women – and we have no idea whether women’s rights are even a topic of discussion in these men-only meetings.”

Instead, they are regressing to their old ways as girls face restrictions in pursuing their education once again. Recently, some girls returned to high school in a northern province of Afghanistan even though they remain restricted in the rest of the country. In a video shared by the spokesman Suhail Shaheen, they were shown waving Taliban flags and wearing white headscarves over black outfits and black veils.

According to Mohammad Abid, an education ministry official in Kabul, the government policy on girls education remains the same and that, “High schools still remain closed for girls.” Basically, girls in primary school were allowed to attend classes from the very beginning, but the older girls remained restricted.

Expressing deep concerns, the United Nations agency for children, UNICEF has stated that, “It is critical that all girls, including older girls, are able to resume their education without any further delays. For that, we need female teachers to resume teaching.”

Women are also being banned from playing sports.

Second, there is an economic setback too as women’s open access to work is being curtailed. According to Afghanistan’s 2004 constitution, women were not only made part of the political process, they joined the army and police, became judges and journalists. Many ladies had started working in the media and government departments too.

However, most of the women’s reforms could not spread to the rural areas, making Kabul and other bigger cities more liberal. Due to restrictions on their movement outside without a male chaperone, it even becomes difficult to get medical care on time, consequently, the country also has a steep maternal mortality rate.

Finally, there may be legal implications. Throughout the 1990s, Afghan women fought for their rights. Even the decade preceding the first term of Taliban rule when Afghanistan was under Soviet occupation had been a challenging time. They finally re-entered public life after the US army intervention in 2001, then in 2004 the Afghan constitution upheld women’s rights and they could hold a certain quota of seats in the Parliament.

In a bid to reset laws pertaining to women, Taliban rulers have now proceeded to set up a ministry for the “propagation of virtue and the prevention of vice” in the same building where the Women’s Affairs Ministry was located. Determining women’s rights under hard-line Sharia law (an extreme version of Islamic law), the Taliban will formulate their new policies according to interpretation from various clerics, jurists and politicians.

As Mariam Wardak, a lawyer and former senior Afghan government official, told Vox, “There is a resistance for women to speak out, for women to hold a certain structure in our country.”

According to Human Rights Watch, a 2009 law that made 22 offences like rape, forced marriage, denying property rights and preventing from receiving education into criminal offences against women was mostly ignored in the country anyway.

Meanwhile, public hangings of criminals have also resumed and there seems to be little difference between the ruthless Taliban rule in the 90s and the present regime.

However, there are some impediments in the way of the Taliban. Running their government and paying salaries may not be possible unless they bend to the demands of other countries that can put pressure on them to reform.

As Heather Barr has suggested, “The international community could – and should – push back hard and communicate to the Taliban that an entity that denies girls access to secondary education, denies women access to most forms of employment and includes zero women in senior levels of their government, will never be seen as legitimate in 2021.”

Just to earn legitimacy, recognition and escape diplomatic isolation and economic collapse, the “Taliban 2.0” may think twice before going back to the 90s.