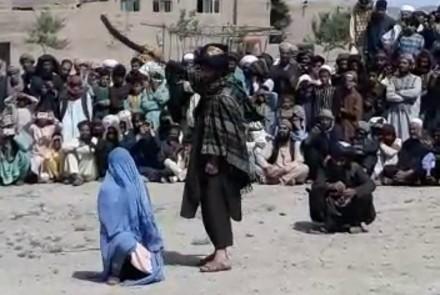 The Herat Department of Women’s Affairs on Wednesday said that Taliban fighters publicly lashed a woman from Oba district over reports that she had an affair with a man.

Tolo News (14.04.2021) – https://bit.ly/2Qq7tge – The video footage, which was widely shared on social media, appears to show dozens of Taliban fighters surrounding a woman and lashing her.

The video footage, which was widely shared on social media, appears to show dozens of Taliban fighters surrounding a woman and lashing her.

“Based on the information that we have, the incident happened in the Greshk area of Oba district in Herat,” said Anisa Sarwari, the head of the Herat Women’s Affairs Department.

“Is it appropriate that the people see such events by the Taliban during the peace process, how the Taliban claims that they want to make peace and reconcile with the people,” said Monisa Hassanzada, the deputy governor of Herat.

Coming at the same time as the announcement of the withdrawal of foreign troops from Afghanistan and the unclear fate of the peace process, this event has worried women in Herat.

Women have warned that if the withdrawal of foreign troops from Afghanistan is not done in a responsible way, the achievements of Afghan women in the past two decades will be lost and they will once again face severe restrictions.

“We are in a situation where targeted attacks are carried out against the women, most of the attacks are claimed by the Taliban, there is still acts of violence by the Taliban against women in Herat and other remote areas of Afghanistan,” said civil society activist Zahra Karamat.

“If the US forces’ withdrawal from Afghanistan is done in an irresponsible way, the women will face an insecure peace and their humanitarian rights and liberties will be sacrificed and the women will face a dark future,” said Halima Salimi, the head of the Afghan’s Women Network in Herat.

“If someone commits a crime, first there is a need for an investigation and evidence to prove that a crime was committed, then there should be an authorized court to issue a verdict but not in the kangaroo court,” said religious scholar Abdul Khaliq Haqqani.

The Taliban has said that they will investigate the footage.

Taliban spokesman Zabihullah Mujahid told TOLOnews that the group had not held such a trial in recent months in Herat.