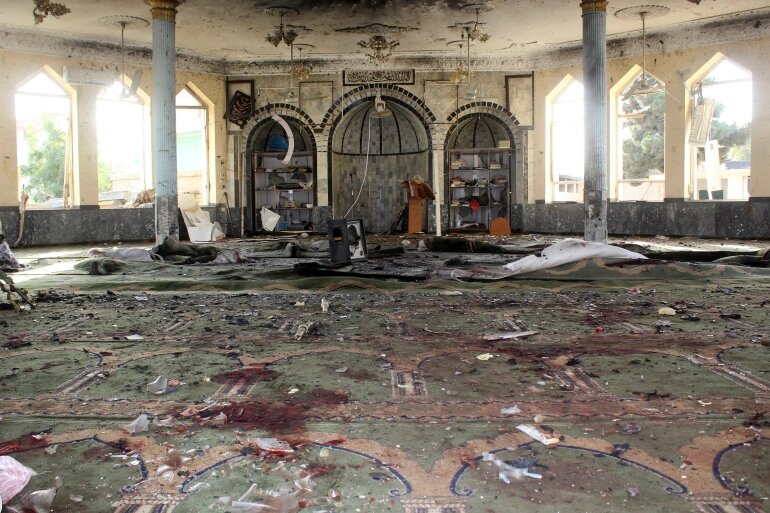 ISIL affiliate claims responsibility for the blast at Shia mosque in Kunduz that has killed dozens.

Aljazeera (08.09.2021) – https://bit.ly/3v4V9lf – Dozens of people have been killed in a suicide bombing at a Shia mosque in Afghanistan’s northeastern city of Kunduz during Friday prayers, the country’s worst attack since the Taliban took over control in August.

The Islamic State in Khorasan Province, ISKP (ISIS-K) claimed responsibility for the attack through its Telegram channels on Friday.

In a statement released on Telegram, the group said an ISIS-K suicide bomber “detonated an explosive vest amid a crowd” of Shia worshippers who had gathered inside the mosque.

Video footage showed bodies surrounded by debris inside the Gozar-e-Sayed Abad Mosque that is used by people from the minority Shia Muslim community.

There have been conflicting reports about the number of casualties. The United Nations mission to Afghanistan said in a tweet the blast killed and wounded more than 100 people.

Dost Mohammad Obaida, the deputy police chief for Kunduz province, also said at least 100 people were killed or wounded in the attack, adding that the “majority of them have been killed”.

“I assure our Shia brothers that the Taliban are prepared to ensure their safety,” Obaida said, adding that an investigation was under way.

Meanwhile, the state-run Bakhtar News Agency said at least 46 people were killed, while more than 140 were wounded inside the mosque in the Khan Abad area of Kunduz city.

A deputy director for the province’s health department said there were “around 50 dead and at least 50 wounded”, the DPA news agency reported.

“They were struggling to deal with the human remains scattered throughout the back yard of the mosque,” Ahelbarra said.

“They expect the death toll to further climb in further hours because they say many people who were injured are in critical condition.”

The blast blew out windows, charred the ceiling and scattered debris and twisted metal across the floor. Rescuers carried one body out on a stretcher and another in a blanket. Blood stains covered the front steps.

In its claim of responsibility, the region’s ISIL affiliate identified the bomber as a Uighur Muslim, saying the attack targeted both Shias and the Taliban for their purported willingness to expel Uighurs to meet demands from China.

The statement was carried by the ISIL-linked Aamaq news agency.

The worshippers targeted in Friday’s attack were Hazaras, who have long suffered from double discrimination as an ethnic minority and as followers of Shia Islam in a majority Sunni country.

Groups affiliated to the ISIL (ISIS) group have a long history of attacking Afghanistan’s Shia Muslims.

There have been several attacks, including one at a mosque in Kabul, in recent weeks, some of which have been claimed by ISIS-K.

Ahelbarra said this explains why the Taliban has in the past few days “launched a major crackdown and said they arrested many ISIL operatives in Kabul and in Jalalabad”.

“This [attack] is going to put more pressure on the Taliban; people will now be angry. When the Taliban took power in August, they prided themselves on providing a safe environment for the Afghan people. Now, this isn’t the case any more because you’re seeing the pattern of those attacks.

“[Friday’s attack by ISIS-K] could be a clear indication that they are sending a message to the international community that they are far from defeated, that they are willing to further expand their footprint across Afghanistan and we are likely to see major confrontation in the future between [ISIS-K] and the Taliban,” Ahelbarra said.