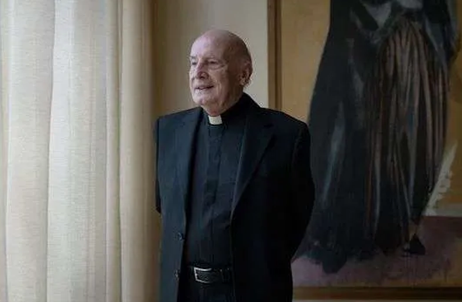 La Croix International (01.09.2021) – https://bit.ly/2Ykg4EL – On this particular morning, an elderly man opens the door of the immense building that is home to the Barnabite religious community in the center of Rome.

He is dressed in an impeccable black suit and is wearing a clerical collar.

There is nothing to suggest that for 18 years this man was the only Catholic priest in Afghanistan.

Nor that in recent hours, the heart of 82-year-old Giuseppe Moretti is overwhelmed by the news coming out of Kabul.

The city, which fell to the Taliban in mid-August, is a place he left in 2014 but never stopped loving.

This morning, with his eyes lingering over the coffee table in the small living room where he has led us, Father Moretti laments: “I am madly in love with Afghanistan. Madly in love.”

“When I first set foot there, there were people waving at us on the tarmac, because the planes were attracting the curious. I looked at this crowd and I said to myself: ‘Now, either you keep your presupposed western superiority and you will not understand anything about this country, or you can drop it and try to understand.’ I chose the second option,” he says.

“There are probably Afghan Catholics. But they risk death”

First was the country at peace, as seen during the first year of his presence, in 1977, before the coup d’état took place a year later.Only diplomats, humanitarians and technicians remained.

The priest also left the country, not knowing that he would return in 1990 for another four years. During the interim, he taught Latin and Italian literature in Florence.

When he returned to Afghanistan, the Soviet army was omnipresent at first, before the country was plunged into civil war. As in the 1970s, Father Moretti ministered in the only chapel in the city, frequented only by the international community.

No Afghans: this was one of the two conditions set by the Afghan authorities when Father Moretti’s distant predecessor was sent to Kabul in the early 1930s.

The second condition?”An absolute ban on proselytizing,” says the priest, the fifth Barnabite to work in Afghanistan.

“There are undoubtedly Afghan Catholics. But they risk death,” he notes.

Moretti celebrated Mass each day in the country’s only Catholic chapel, located within the Italian Embassy compound.

The priest was seriously wounded and had to go back to Italy. He would not return to Afghanistan until eight years later, when Italy decided to reopen its embassy.

The slow reconstruction of the country

Oddly enough, for years, and despite the Taliban, the church has remained standing.

The Islamists had, however, identified the chapel.

And for good reason: the building of the religious police was located exactly on the other side of the embassy wall.

After his second return to Afghanistan, Moretti witnessed the slow reconstruction of the country.

The situation was closely followed by John Paul II, who regularly spoke of Afghanistan in his speeches.

The words of the Polish pope carried far.

When the John Paul II died, no less than seven Afghan ministers attended the memorial Mass that Moretti celebrated.

The priest continues to follow the situation in Afghanistan, hour by hour. And he does not hide his nostalgia.”Those were the most beautiful years of my priesthood,” he smiles.

In his little church, “the American 5-star general” and “the Filipino house staff” rubbed shoulders.

“It was there, when it was as though we were on an island, cut off from everything, that I felt Catholicism,” he recalls.

In these hours when Afghanistan has fallen like a house of cards, he also expresses his sorrow.” I have great sadness. A deep disillusionment.

For years, I hoped and saw a positive spiral of freedom and democracy. And now everything has been swept away in a few days,” Moretti says.

He actually went back to Kabul briefly during the summer of 2019. His Barnabite successor asked him to fill in for a month and Moretti quickly accepted.

He left with enough money to buy 500 new benches for the school he had founded years earlier. It now had 2,500 students from kindergarten to high school.

“My sadness is that I could not reach the school from Kabul. I was prevented from doing so for security reasons,” he laments.

Then there is silence.”You know, it wasn’t a dazzling presence, but a silent presence.

We were little stars,” he says.

“But even tiny stars can shine.”

(Photo by GIANLUCAGASBARRI/PARALLELOZERO for LA CROIX)