WORLD: ‘In Prison for Their Faith 2020’, a new report mapping prisoners worldwide from 13 religious groups 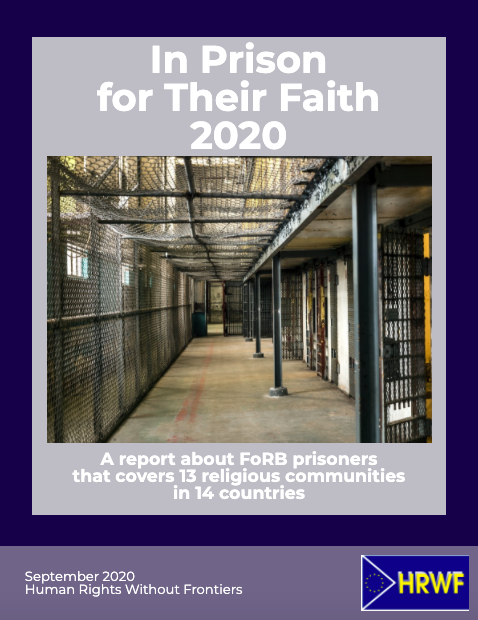 Uyghur Muslims, Tibetan Buddhists, The Church of Almighty God Members and Falun Gong Practitioners are by far the most numerous believers behind bars for the practice of their faith, all imprisoned solely by China, according to the latest report by Human Rights Without Frontiers (HRWF).

HRWF (28.09.2020) – With 1-2 million Uyghur Muslims and half a million Tibetan Buddhists (*) in so-called ‘re-education camps’, thousands of members of The Church of Almighty God and thousands of Falun Gong practitioners in detention for years, China is the worst violator of religious freedom in the world. These groups comprise of the majority of individuals in prison worldwide for the legitimate exercise of their religious freedom, according to HRWF’s latest report titled “In Prison for Their Faith 2020” (213 pages) released online and in print on 28 September.

Uyghur Muslims and Tibetan Buddhists have been massively incarcerated without committing any crimes and without any official charges. The Chinese Communist Party (CCP) claims they are detained  for the purpose of being ‘reeducated’, and pushes the state-sanctioned Marxist-Leninist ideology with the obvious objective to supersede Islam.

Thousands of members of The Church of Almighty God, which is the most rapidly expanding new religious movement in China, as well as Falun Gong practitioners have been arrested, tortured and incarcerated. Most of their sentences are between three and seven years, but some are serving 10 years or more.

Among Christians of all faiths, Protestants were the most numerous in prison, mainly for being denied registration and the ensuing right to operate, such as in Eritrea, Vietnam and China; for being accused of blasphemy, such as in Pakistan; or for converting Muslims, such as in Iran.

Besides Uyghur Sunni Muslims in China, all other Muslim prisoners (Sunnis, Tabligh Jamaat, Said Nursi followers, Sufis and Shias) were sentenced to heavy terms despite being in Muslim-majority countries such as Kazakhstan, Pakistan, Tajikistan and Uzbekistan.

More than 50 Jehovah’s Witnesses were indefinitely detained in atrocious conditions in Eritrea for being conscientious objectors to military service, some since 1994, or for the peaceful exercise of their religious freedom. In Russia, the group was banned in April 2017 on charges of extremism and over 30 individuals were sentenced to heavy prison terms for exercising their freedom of worship and assembly, even in private. In Singapore and Turkmenistan, they were incarcerated as conscientious objectors.

For years, Baha’is have been systematically arrested and imprisoned in Iran. The charges against them are typically: forming an illegal cult, acting against national security, espionage, propaganda against the regime, posing  a  threat  to the  regime  by  sharing  Baha’i  ideas  with  Israel, plotting  to overthrow the regime, membership  in  an  anti-Islamic group, membership  in  illegal  groups  and  assemblies, and jeopardising the security of the country to further the aims of the Baha’is and international organisations.

An unknown number of Tibetan Buddhists were arrested for the mere practice of their religion in China, while nearly 30 of An Dan Dai Dao and Hoa Hao Buddhists were serving long periods of detention in Vietnam.

HRWF’s report “In Prison for Their Faith 2020” also covers Ahmadis in Pakistan. All of them at the time of writing this report have been victims of Pakistan’s blasphemy laws, which are used and abused to serve as an outlet for pervasive anti-Ahmadi hostility as well as to settle private disputes.

The report “In Prison for Their Faith 2020” has identified a number of religious groups whose members or followers have purposefully been put in prison either for their religious identity or for the legitimate exercise of religious freedom which includes: the freedom to have or not have a religion, to change or retain one’s religion or beliefs; the freedom of expression on religious issues; the freedom of association; the freedom of worship or assembly; and conscientious objection to military service.

Each section is devoted to a specific religion or religious group and is structured as follows: an introduction about the religious denomination, the teachings, and country-specific data such as the reasons for the persecution, statistics about the number or prisoners, the articles of the penal codes used and misused for sentencing, advocacy developed by the EU and the US institutions, individual case studies and concluding thoughts looking to the future.

The report is based on HRWF’s Database of FoRB Prisoners which has documented over 6,000 individual cases of prisoners and is regularly updated. These prisoners are detained in 20 countries and belong to 18 different religious groups: https://hrwf.eu/prisoners-database/.

Additionally, research from HRWF’s vast online library of news covering over 50 countries for the period 2018-2020* was used to inform this report.

(*) The widespread detention of Tibetan Buddhists only emerged quite recently on the radar of the international community. As such, the magnitude of this issue is not fully reflected in this report but will be in a subsequent specific report.

(*) Human Rights Without Frontiers Int’l has been monitoring freedom of religion or belief as a non-religious organization since 1989. See its news database online at https://hrwf.eu/newsletters/forb/ . Requests about 2016-2017 can be addressed to the contact information above.