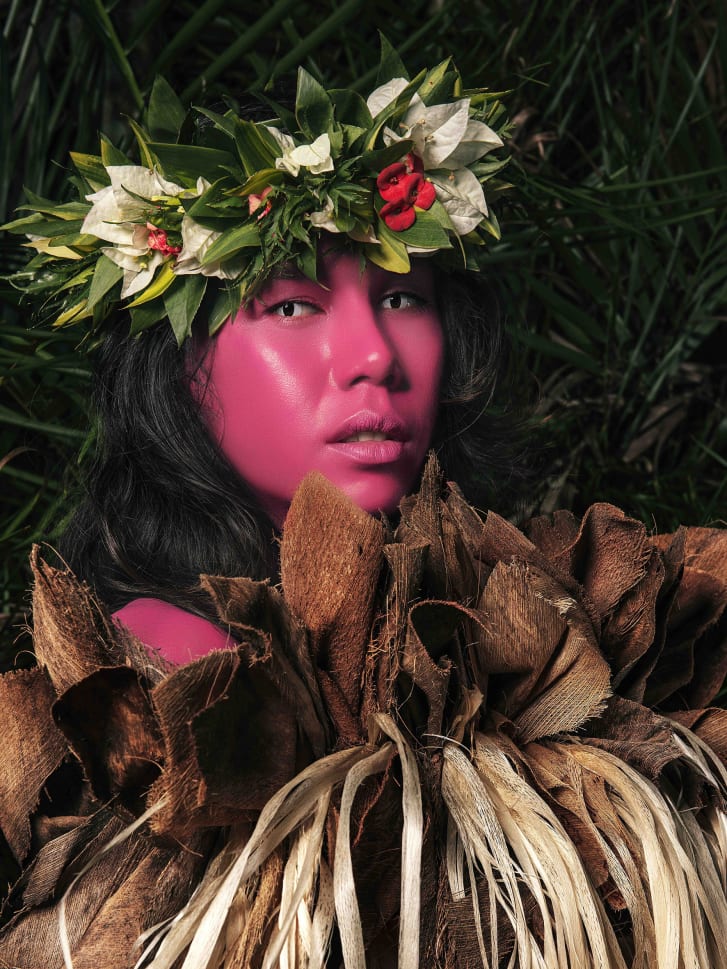 CNN (09.10.2019) – https://cnn.it/2VryVIl – On the Polynesian island of Tahiti, there is said to be something akin to a sixth sense — one that belongs to neither men nor women. Instead, it is the sole domain of the “mahu,” a community recognized as being outside the traditional male-female divide.

“Mahu have this other sense that men or women don’t have,” said Swiss-Guinean photographer Namsa Leuba, whose images from the island are showing at a new exhibition in London. “It is well known in (French Polynesia) that they have something special.”

In Tahiti, mahu are considered a third or “liminal” gender, born biologically male but recognized by peers as distinct, often from early in their lives. Their gender identity has been accepted on the island since time immemorial, and mahu traditionally play key social and spiritual roles, as guardians of cultural rituals and dances, or providers of care for children and elders.

Leuba’s new photo series, “Illusions: The Myth of the ‘Vahine’ through Gender Dysphoria,” shows the diversity of gender identities in French Polynesia, where the photographer spends half her year.

In a telephone interview from Tahiti, Leuba said the additional power that the Mahu apparently possess is difficult to describe. It is, she explained, a mixture of empathy, intuition, generosity and creativity – all words that might be applied to Leuba’s wide-ranging photography.

Since graduating from the Lausanne University of Art and Design (ECAL) in 2010, Leuba has developed an approach that mixes elements of documentary photography with the rich staging of fashion shoots. The result is something she calls “docu-fiction.”

Describing herself as African-European (her mother is Guinean and her father is Swiss), Leuba said she aims to reflect, through fiction, realities made invisible when viewed through a Western colonial lens.

In 2011, she traveled to the Guinean capital, Conakry, for a project that would set the tone for her later work. Exploring animist beliefs in the city, she brought portraits of regular people — mostly strangers she met on the street — to life with elaborate poses and backdrops.

The project, along with later work across Africa, confronted the legacy of colonialism and considered how Western perceptions have impacted present-day societies. And Leuba developed these ideas further in Tahiti.

Images from the series are on show at a new all-female London gallery, Boogie Wall. They aim to show the complex gender and sexual identities that exist in Tahiti, directly attacking stereotypes that rely on exoticism and the sexualization of Polynesian women.

Mahu’s traditional artistic roles have made them a subject of fascination for visiting artists including Paul Gauguin, whose 19th-century portraits of young Tahitians strongly influenced Western impressions of Polynesian culture while painting a controversial picture of an exotic and sexually permissive paradise.

Central to these stereotypes was the ideal of the “vahine.” The term, which translates simply as “woman,” came to be used in the West to mean submissive girls or young women, embodied in the sexualized poses in Gauguin’s paintings (indeed, he would marry a girl in her early teens during a visit to the island in 1891).

In “Illusions,” Leuba tackles both the “vahine” myth and the influence of 19th-century Christian missionaries, who preached the Bible’s binary view on gender and instituted laws that criminalized relationships with mahu.

The portraits are often shot in everyday surroundings, but by using bright body paint and stylized costume, Leuba aims to reassert the individuality of her subjects. Her images also include people who identify as “rae-rae,” trans women who, unlike many mahu, often pursue gender reassignment surgery.

“I already knew what I wanted to have,” said Leuba. “For me, it was very important to see (the subject’s) beauty and the power — in my pictures, it’s very strong look, a strong posture — and to (allow them to) make themselves beautiful”

Leuba interviews her subjects for hours before photographing them. While a few were cautious at first, having previously had uncomfortable experiences with voyeuristic photographers, she said, more began coming forward after the first images appeared in magazines in New York.

Through use of elaborate staging, Leuba avoids the rawness typical of documentary photography. Instead, she said her positive, glamorous approach allows eclectic stories to shine, including histories of homelessness and conflict, along with journeys of acceptance from families and culture.

“Sometimes I would hear some really (tough) stuff that has happened to them, and it was totally not sexy or glamorous. It was difficult. And others were well-accepted by their family and their community,” Leuba said.

“All of the ‘lifecycles’ were totally different.”