Vietnam: Vietnamese pastor punished for ‘reports’ to US diplomats; Catholic blogger to be expelled to France 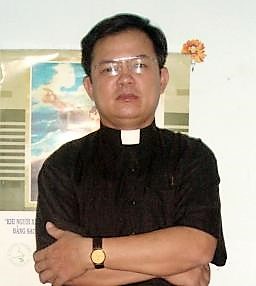 WorldWatchMonitor (15.06.2017) – http://bit.ly/2rxYjAm – A pastor imprisoned in south-east Vietnam is being further punished for telling a visiting U.S. diplomatic delegation about abuses he has suffered.

Nguyen Cong Chinh, serving an 11-year sentence for “undermining national solidarity” by religious activities with ethnic groups in the Central Highlands, met US consular officials in Ho Chi Minh City on 25 May. He told them about shards of glass being put into his food, and enduring corporal punishment and humiliation because, he said, he refused to do what prison officers require.

Immediately after the US delegation left the prison, Chinh was isolated from other prisoners and put into a cramped space, according to his wife, Tran Thi Hong, who saw him on 7 June

Hong accused Vietnamese officials of using “shameful and divisive tactics” to put pressure on her husband when she discovered, during a visit on 11 May, that he had been told that she had been unfaithful.

Hong, a mother of four, was herself tortured, beaten and questioned at a police station for two months after she too met a U.S. delegation on religious freedom in March 2016 in Pleiku city, Central Highlands.

Vietnam has 83 prisoners of religious freedom behind bars, reported BPSOS, a U.S.-based NGO on June 6.

Meanwhile Radio Free Asia reports that Cambodia has repatriated 16 Montagnard asylum seekers to Vietnam after they failed to meet its requirements for refugee status. The Montagnards are some 30 tribes of indigenous people from Vietnam’s Central Highlands, where Nguyen Cong Chinh was based.

Many Montagnards practice forms of evangelical Protestantism, putting them at odds with Vietnam’s communist rulers who tightly control religion.

In 2001, Vietnamese troops crushed hill tribe protests in the Central Highlands, prompting an exodus of Montagnards. Hanoi routinely asks Cambodia to return those who flee.

The 16 were handed over to the Vietnamese authorities on 8 June. They were accompanied by officials from the UNHCR who arranged their return. The Montagnards were not deported but “voluntarily agreed to return while the UN was making arrangements for them”, according to Tan Sovichea, a Cambodian immigration spokesman.

He added that the UNHCR had been working with Vietnamese authorities to ensure that the Montagnards would be safely returned and protected from persecution for their attempt to flee the country. Montagnards sent back by Cambodia in the past have been questioned and beaten up.

When contacted by Radio Free Asia, the UNHCR in Cambodia was not available for comment, but it was expected that their officials would continue with the Montagnards and Vietnamese authorities to where the would-be asylum seekers would be settled.

Some Christians were among a group of more than 50 Montagnard asylum seekers who fled Cambodia to Thailand in early 2017 amid fears of forced repatriation. However, as Thailand and Cambodia are not signatories to the different international treaties that deal with the status of refugees, Montagnards become classified as ‘undocumented economic migrants’ with no rights or status regardless of their registration with the UNHCR.

Also, the Vietnamese government’s plan to deport an outspoken Catholic blogger has been condemned by Reporters Without Borders (RWB), the international organisation campaigning for press freedom.

Peter Pham Minh Hoang, who posted writings about education, environmental issues and threats to Vietnam’s sovereignty from China which led to a 17-month prison sentence and three years of house arrest in 2011, has dual Vietnamese and French citizenship. On June 1 was told he is due to be deported to France.

Hoang, a university lecturer who acquired his French citizenship during many years in France, has been the target of both psychological and judicial harassment since his return to Vietnam in 2000, stated RWB on June 7.

However he has offered to renounce his French citizenship, saying that he will retain only his Vietnamese citizenship.

“My expectation is to live and die in my homeland,” he said. His wife takes care of her elderly mother and disabled brother. “Our family must be separated” if he is expelled, he states.

A spokesperson for France-based RWB said Vietnam’s decision “is typical of the blatant way they harass all those who raise controversial issues”.

Vietnam’s first ever law on religions since it was re-unified under communist rule in 1975 will come into effect in January 2018.