Global Voices (09.04.2018) – https://bit.ly/2JCeMcu – This article by Kathy Triệu is from Loa, a news website and podcast of Viet Tan that broadcasts stories about Vietnam. It is republished by Global Voices as part of a content-sharing agreement.

Six activists were sentenced to between seven and 15 years in prison on charges of subversion after a one-day trial in Hanoi. These are the harshest punishments to be issued by Vietnam’s one-party state in years.

According to attorney Luân Lê, who represented some of the defendants, Nguyễn Văn Đài said while inside the heavily secured courtroom that “leniency for political dissidents today is really an act of leniency for yourself in the future.”

Trương Minh Đức shared similar sentiments, saying, “I have no regrets. Today you put me on trial but tomorrow it may be you on trial.”

Nguyễn Văn Đài’s legal assistant Lê Thu Hà, who was arrested with him in December 2015, received nine years in prison. Lutheran pastor Nguyễn Trung Tôn and Trương Minh Đức both received 12 years. Nguyễn Bắc Truyển and Phạm Văn Trội received sentences of 11 and seven years in prison, respectively. All besides Lê Thu Hà are bloggers and citizen journalists who have been jailed before.

All six are members of the Brotherhood for Democracy (BFD), an organization that promotes civic engagement and provides training in human rights. The group began in 2013, with Nguyễn Văn Đài as one of the founding members. 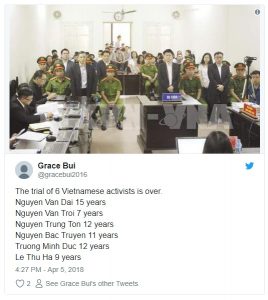 A tightening grip on dissent

Commenting on the trial, Ministry of Foreign Affairs spokeswoman Lê Thị Thu Hằng said, “In Vietnam there is no such thing as a ‘prisoner of conscience’, and there’s no such thing as people being arrested for ‘freely expressing opinion’.” 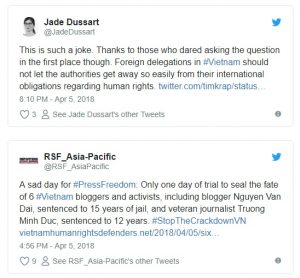 The latest research from Amnesty International shows there are currently close to 100 prisoners of conscience in Vietnam. In 2017 alone, more than 40 activists were arrested, issued warrants or exiled in an ongoing crackdown on freedom of expression.

The European Union also condemned the convictions. An EU spokesperson for the European External Action Service (EEAS) said the development “continues the negative trend of prosecuting and sentencing human rights activists and bloggers” in Vietnam.

Nguyễn Trung Trọng Nghĩa, who is the son of pastor Nguyễn Trung Tôn, told Loa that he and his family are heartbroken with the sentence. Nghĩa, also known as Effy, had been traveling the world to advocate for his father and other members of the BFD:

“It’s really horrible because my grandmother is already 90 years old. I don’t think she’s going to last the next 12 years,” he said. “I don’t think my father will get the chance to see her again. [We are] a family who has a member dedicating their lives to society and this is what we get from the government.”

Before the trial, supporters marched the roughly two kilometers from Thái Hà Church to the courthouse in Hanoi in solidarity with the six activists. A Facebook live video showed how the mobilization was followed and eventually broken up by security and plainclothes police. According to international news agency AFP, at least two participants were taken into unmarked vans by security police, and several others were taken into buses.

In the days leading up to the trial, hundreds of people around the world showed support for the activists by sharing photos with signs reading “Democracy is not a crime” along with the hashtag #HAEDC, which stands for the Brotherhood for Democracy. 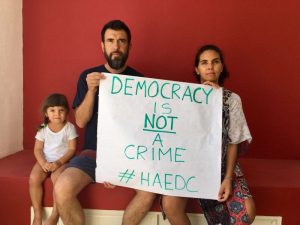 “Democracy is not a crime. #HAEDC” Activist Héctor Castañón and his family in Mexico. (Photo credit: Facebook Việt Tân)

International rights organizations and family members have raised these activists’ cases for nearly two years, even garnering the attention of a United Nations body. Family members of the activists met with seven embassies before the trial to plead for support and intervention. 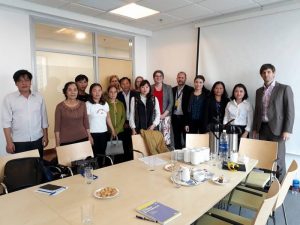 As the trial closed, despite facing more than a decade behind bars, Nguyễn Bắc Truyển stated: “I will continue the struggle and if I must sit in jail, others on the outside will fight on for me and they will never stop.”