US: US travel ban: Why these seven countries?

President Donald Trump has signed an executive order that banned travel into the United States for citizens from these seven countries for 90 days: Iran, Iraq, Libya, Somalia, Sudan, Syria and Yemen.

These countries were already named as “countries of concern” after a law passed by a Republican-led Congress in 2015 altered a visa admissions programme.

The Visa Waiver Program allows citizens from 38 countries to enter the US for 90 days without a visa. The UK, France and Germany are among those countries allowed in under the waiver programme. Visitors apply for an Electronic System for Travel Authorization (Esta).

In December 2015 Congress passed a law – created by senators from both parties, and supported and signed by the White House – that removed waiver benefits for foreign nationals who had visited certain countries since March 2011. The countries were identified as having a terrorist organisation with a significant presence in the area, or the country was deemed a “safe haven” for terrorists.

After Libya, Somalia and Yemen were added to the list in February 2016, the “countries of concern” were the seven named in Mr Trump’s order.

According to the restrictions, citizens who had been eligible for the waiver programme and had visited one of those seven countries in the time period were forced to apply for a visa.

The Obama administration passed the Visa Waiver Program Improvement and Terrorist Travel Prevention Act of 2015 after the November 2015 terrorist attacks in Paris. The Act, however, unlike Trump’s much more broad order, only affected people eligible for the visa waiver programme, rather than suspend all citizens’ travel from one of those seven countries.

In a statement on 29 January, President Trump said his policy was “similar” to an Obama order that “banned visa for refugees from Iraq”.

Trump referred to an incident in May 2011 when the FBI indicted two Iraqi citizens in Kentucky on federal terrorism charges. Both were accused of providing material support to al-Qaeda and had been involved in attacks against US forces in Iraq.

A hearing before the Subcommittee on Counterterrorism and Intelligence found that the pair had “exploited special Iraqi refugee programs”. The vetting system came under review and this resulted in fewer Iraqi refugee admissions that year.

The number of refugees from Iraq dropped from 18,016 to 9,388 as a result of the suspension. That number increased to 12,163 the following year.

Do citizens from the seven countries pose the biggest threats?

Mr Trump’s order said that foreign-born individuals have been responsible for “numerous” terrorism-related crimes since 9/11, including foreign nationals who have entered the country on visa or refugee programmes. The 9/11 attackers came from Saudi Arabia, UAE, Lebanon and Egypt.

In September 2015 the Homeland Security Committee reported that the so-called Islamic State had inspired or directed 60 terror plots or attacks in Western countries, including 15 in the United States. There are 250 American citizens known to have joined Islamist extremist groups. 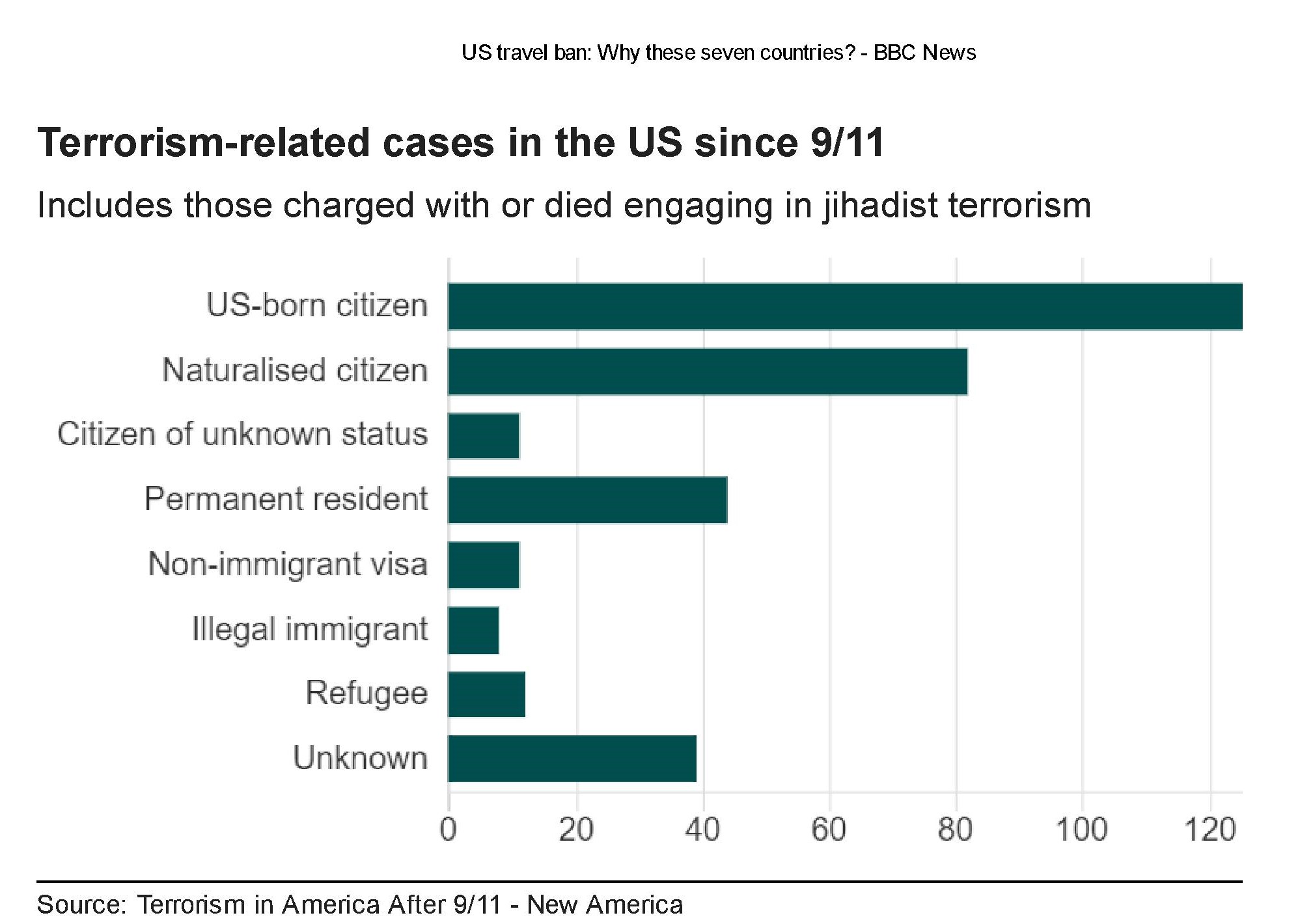 Significant recent attacks in the US were not committed by citizens from any of the seven countries included in the order. This list includes:

There have been a few non-fatal attacks by individuals from two of the countries on the banned list.

According to the New America Foundation, 82% of all terrorism incidents since 2001 were conducted by citizens and permanent residents. Since 9/11, jihadists have killed 94 people inside the United States.

A Cato Institute study found that Americans are 253 times more likely to die in a regular homicide than dying in a terrorist attack committed by a foreigner in the US.

US Senators John McCain (R-AZ) and Lindsey Graham (R-SC) have said the order “may do more to help terrorist recruitment than improve our security”, because of the signal it sends to the Muslim world.

But President Trump has rejected that notion, saying in an interview that America’s enemies were already angry and it was his number one responsibility to keep the country safe. And his supporters wholeheartedly agree.

“Donald Trump says this is temporary and I trust him,” said one resident in New York’s Staten Island. “His number one job is to protect the American people.”