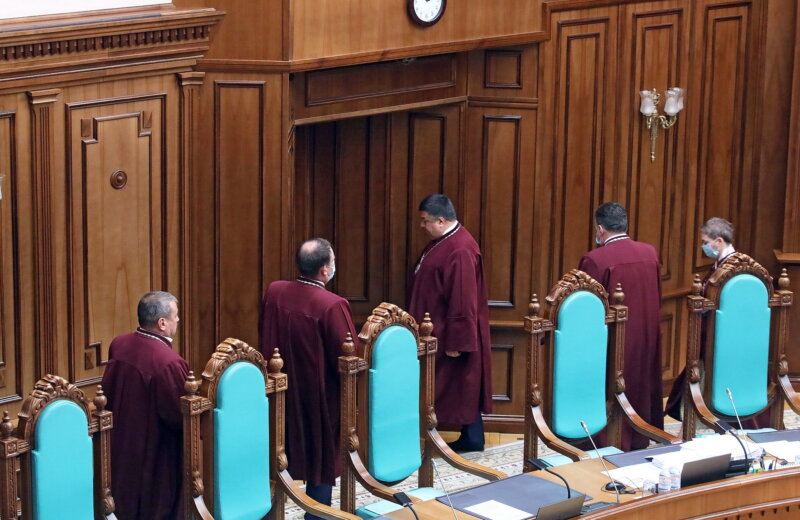 Buquicchio’s comments echoed two Dec. 11 opinions that the commission issued on the Constitutional Court decision and on reforming the court.

On Oct. 29, the Constitutional Court ruled that the country’s asset declaration system for state officials was unconstitutional, effectively destroying one of the pillars of Ukraine’s anti-corruption infrastructure. That triggered a major backlash from both civil society and President Volodymyr Zelensky.

Since the ruling, several bills have been submitted to parliament to resolve the impasse with the Constitutional Court.

On Dec. 4, lawmakers passed one of them, but it does not appear to be a viable solution. The bill reinstates penalties for lying in asset declarations, but civil society has criticized the new penalties as too mild and ineffective.

“Both opinions of the Venice Commission issued this week are very critical of decision No. 13-r/2020 of the Constitutional Court,” Buquicchio told the Kyiv Post. “The commission detected serious flaws in the court’s reasoning. The court failed to address very specific and serious allegations of a conflict of interest, which would normally prevent several judges from sitting in this case. Conclusions of the court are not based on the international and European standards and create serious obstacles for the fight against corruption in Ukraine.”

On Oct. 30, Zelensky submitted a bill to the Verkhovna Rada, Ukraine’s parliament, seeking to fire all incumbent Constitutional Court judges and treat their decision on asset declarations as null and void.

Zelensky has admitted that he was seeking a political, rather than legal path out of the impasse.

On Nov. 3, lawmakers from the Servant of the People and Holos factions submitted a bill to temporarily block the Constitutional Court’s work by increasing its quorum from 12 to 17 judges. Currently, three of the 18 Constitutional Court seats are vacant.

However, Buquicchio sees these solutions as inconsistent with the rule of law.

“Problems created by this judgment should be solved within the framework of the principles of the rule of law,” he said. “…Parliament should not block the activity of the Constitutional Court through financial pressure or procedural obstacles or similar efforts.”

He said that “other solutions are proposed by the Venice Commission: the obligation to give more detailed and specific reasoning (explaining Constitutional Court judgments), enhanced disciplinary procedures, new rules on recusal of judges, etc.”

“The Commission did not exclude that the rules of quorum may be reviewed – but rather in order to prevent the blocking of the work of the Court when a number of judges have to withdraw due to a conflict of interest,” Buquicchio said. “In sum, we are not in favor of a quorum which would make further functioning of the Court impossible.”

Instead of these proposals, the Venice Commission suggested a thorough reform of the Constitutional Court.

“Strategically speaking, we see a need for a serious reform of the court, its procedures and the way how judges of the court are elected,” Buquicchio said. “The Venice Commission recommended pre-selection of candidates to the positions of judges of the Constitutional Court with the participation of international partners, more stringent conflict of interest rules, re-defining cases where self-recusal of a judge is required, revising rules on disciplinary liability of judges, etc. “’Bad’ decisions of this kind will be virtually impossible if such reform of the court is successful.”

Photo: Oleksandr Tupytsky, chairman of the Constitutional Court of Ukraine (С), leaves the courtroom after hearing a case challenging the constitutionality of Artem Sytnyk as director of the National Anti-Corruption Bureau of Ukraine on July 9, 2020. The court, derided as unaccountable and rife with conflicts of interests, has issued a string of rulings that dismantle anti-corruption institutions — including declaring Sytnyk’s appointment unconstitutional. Credit: Ukrinform.