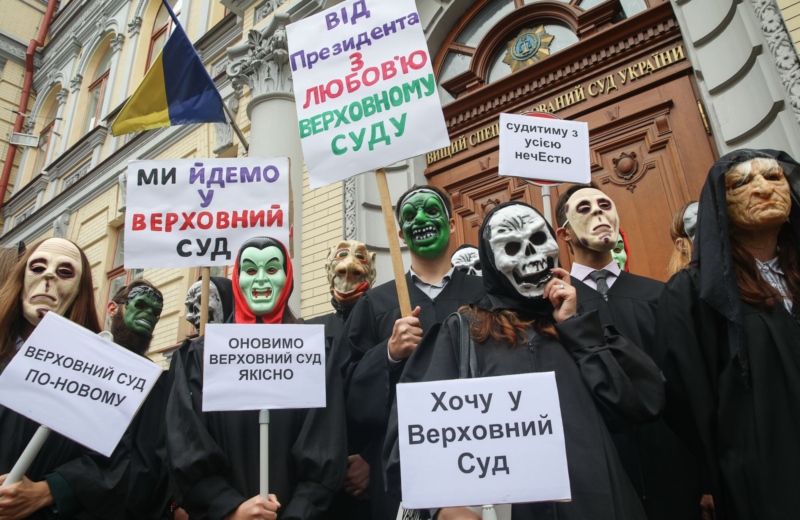 Kyiv Post (11.10.2020) – https://bit.ly/3k42w64 – The European Commission for Democracy through Law, also known as the Venice Commission, has criticized some aspects of Ukraine’s judicial reform legislation.

The commission expressed its opinions in an Oct. 9 assessment of a judicial reform bill submitted by President Volodymyr Zelensky to the Verkhovna Rada in June.

Specifically, the Venice Commission lambasted Ukraine’s efforts to increase the powers of the controversial High Council of Justice (HCJ), the judiciary’s highest governing body, and called for ensuring its integrity.

The commission also recommended improving criteria for ensuring the independence and integrity of foreign experts who will help Ukraine choose another judicial body, the High Qualification Commission of Judges (HQCJ). Moreover, the commission recommended restricting the powers of the unreformed and tainted Kyiv District Administrative Court, which is headed by Pavlo Vovk.

Zelensky’s first judicial reform bill was signed into law in 2019 with the ostensible aim of firing tainted judges and creating credible judicial institutions. However, two bodies tasked with cleansing the judiciary had not been created by the deadline set under the law for February, and the attempt failed.

In June 2020 Zelensky submitted another bill on judicial reform to the Verkhovna Rada. But legal experts and anti-corruption activists lambasted the bill, saying it would not lead to any real reform.

The current High Council of Justice, which will determine the outcome of the new judicial reform, has a toxic reputation among Ukraine’s civil society. Many of its members face accusations of corruption and ethics violations, which they deny.

According to Ukraine’s memorandum with the International Monetary Fund, Ukraine was supposed to create a commission including foreign experts in order to fire tainted members of the High Council of Justice if they violate ethics and integrity standards. However, the bill submitted by Zelensky in June does not envisage such a commission.

“During the virtual meetings, the delegation of the Venice Commission learned about allegations of corruption against some members of the judiciary, including the High Council of Judges (hereinafter HCJ),” the Venice Commission said. “Furthermore, the delegation received contradicting information as to the nature and quality of the members of the HCJ having been properly scrutinized in line with applicable rules and about whether all members of the HCJ were appointed in line with the rule that a consecutive appointment for two terms is not permitted. The question of trust in this highest body of the judiciary was a recurrent topic in all of the virtual meetings.”

In 2019 Pavlo Grechkivsky and Oleksiy Malovatsky were re-elected to the High Council of Justice for a second term despite the legal ban on a consecutive second term for council members. Vovk’s Kyiv District Administrative Court issued a ruling allowing them to be re-elected.

In 2016 Grechkivsky was charged with extorting $500,000 for favorable court rulings with the help of Bohdan Lvov, who is currently the deputy head of the Supreme Court. Both of them deny the accusations.

Zelensky’s bill also envisages increasing the powers of the High Council of Justice and giving it full control over the selection of the High Qualification Commission.

“These provisions should be removed and the new HQCJ should have full autonomy, like the dissolved HQCJ, especially be able to establish its own rules of procedure,” the Venice Commission said. “The new HQCJ should build on the work of its predecessor and it should be free from interference from the HCJ. While this is not covered in draft Law No. 3711, the issue of the integrity and ethics of the HCJ should be addressed as a matter of urgency as well… No new competencies should be attributed to the HCJ.”

Several sources told the Kyiv Post that the President’s Office had drafted a separate judicial reform bill in September on cleansing the High Council of Justice. The sources spoke on the condition of anonymity because the information is confidential.

In its current state, the new bill does not comply with IMF conditions: the High Council of Justice would have full control over its own cleansing, and foreign experts would have a minimal role and would not be able to influence anything, according to the sources. The draft could be changed in the future, however.

Zelensky’s June bill also stipulates that a selection panel comprised of three members of the Council of Judges, a judicial self-regulation body, and three foreign experts would choose new members of the High Qualification Commission of Judges.

According to the legislation, foreign experts may be nominated by any international organizations that engage in anti-corruption efforts and judicial issues. The High Council of Justice will then choose any of the nominees.

Under Zelensky’s previous reform bill, foreign experts were to be selected out of the Public Council of International Experts, which took part in the selection of High Anti-Corruption Court judges last year. Its members were praised by Ukraine’s civil society for independence and professionalism, and their participation was supposed to ensure the selection of an independent and professional High Qualification Commission.

“The current draft (Zelensky’s June bill) however widens the scope of bodies which can nominate international experts. Instead, the circle of possible nominating entities should remain as narrow as with the Anti-Corruption Court,” the Venice Commission said. “The Venice Commission recommends granting nomination powers only to those entities who traditionally cooperate with Ukraine in the field of the judiciary and have already concluded agreements on such cooperation.”

Under the new bill, if international organizations fail to nominate experts for choosing a new High Qualification Commission, they can be nominated by Human Rights Commissioner Lyudmila Denisova. Anti-corruption activists and legal experts argue that this is a loophole for avoiding using foreign experts altogether, which also makes the reform bill meaningless.

Denisova, who is supposed to nominate experts, is also controversial. According to recordings released by the National Anti-Corruption Bureau of Ukraine (NABU), Judge Pavlo Vovk proposed in 2019 that Denisova appoint a High Qualification Commission member in exchange for his court canceling rulings against her by the National Agency for Preventing Corruption.

Denisova, who appointed Mykola Syrosh to the commission in 2019, did not respond to requests for comment.

“This choice (of the human rights commissioner for choosing experts) was criticized during the virtual meetings,” the Venice Commission said. “This function should be entrusted to a neutral and ethical actor or body. It is up to the Ukrainian lawmaker to decide which institutions meet these requirements best.”

“The disciplinary procedure should be simplified by reducing the excessive number of remedies available: against disciplinary decisions of the HCJ, an appeal should lie directly with the Supreme Court and no longer with the unreformed Kyiv District Administrative Court and the administrative court of appeal,” the Venice Commission said.

“The judicial system of Ukraine has been subject to numerous changes in recent years,” the commission said. “Following presidential elections, the new political power would often start new changes to the judicial system. In the absence of a holistic approach, various pieces of legislation were adopted that did not have the character of comprehensive reform. These problems are – at least in part – the result of a poor legislative process: a plethora of bills dealing with specific aspects, often in a rushed manner, a fragmented approach/lack of a holistic approach, no proper impact assessments before further changes are proposed and a lack of clarity.”

The commission said that “another problem is the poor implementation of the laws once they are adopted, possibly due to a continued problem of corruption and a lack of integrity in some parts of the judiciary.”

“Due to the numerous unfinished and incoherent attempts to reform the judiciary, the Ukrainian judiciary rests in a stage of transition,” the commission added.

Photo: Protesters wearing masks that are meant to symbolize Ukraine’s corrupt judges rally in front of the Supreme Court building on Sept. 13, 2017.