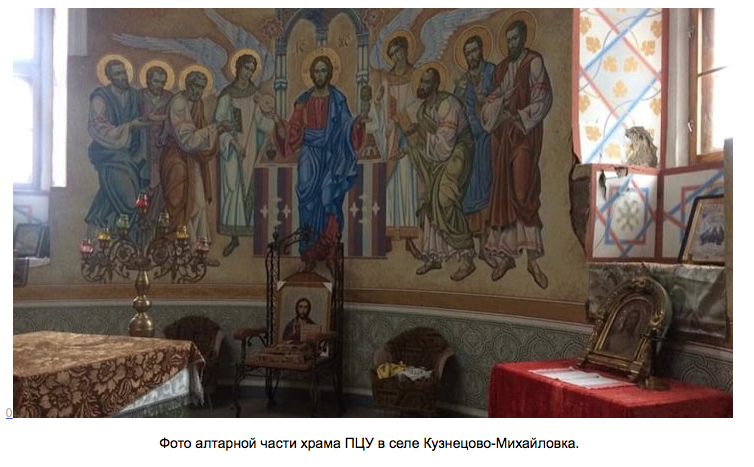 Union of Orthodox Journalists (03.05.2019) – https://bit.ly/2JdrZKK – Earlier, representatives of the OCU/ UOC KP reported that “the ‘DNR’ and the Moscow Patriarchate seized the temple of the OCU in Kuznetsovo-Mikhailovka, Donetsk region”.

On May 2, 2019, during a meeting of the OSCE Permanent Council, the Permanent Representative of Ukraine to international organizations in Vienna Igor Prokopchuk called on the OSCE SMM to verify the report on the decision of the Russian occupation administration to confiscate the church and church property of the OCU in the village of Kuznetsovo-Mikhailovka of the Telmanovsky district, Donetsk region, reports “Ukrinform”.

“We expect the Mission to check the latest reports of April 25 regarding the decision of the Russian armed forces to confiscate the church of the Orthodox Church of Ukraine in the village of Kuznetsovo-Mikhailovka in the occupied part of the Donetsk region and transfer the ownership of it to the Russian Orthodox Church in Ukraine,” the Ukrainian diplomat said.

At the same time, Prokopchuk stressed that Ukraine strongly condemns “such repressive actions of the Russian side that violate freedom of religion and religion”, urging the SMM to “continue to implement this part of its monitoring mandate”.

Earlier Yevstratiy Zoria wrote on his Facebook page that “Russian invaders and their henchmen are taking away a Ukrainian church in the Donetsk region”, referring to the message of the Donetsk “eparchy” of the UOC KP, which openly accused the Moscow Patriarchate of seizing the temple. 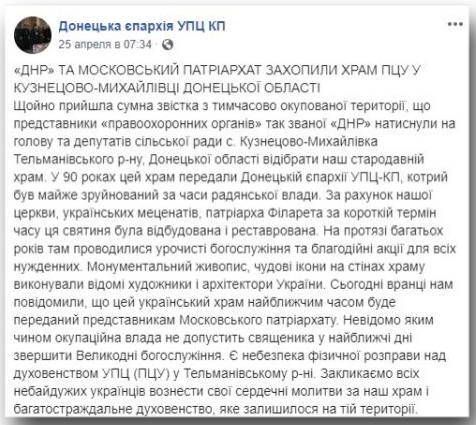 “I spoke with the Donetsk Eparchy,” Archpriest Nikolai Danilevich, vice-chairman of the UOC Department for External Church Relations, commented on the message by the UOC KP / OCU. “The situation is the following: our Donetsk Eparchy of the UOC has nothing to do with this. This is the initiative of the local self-proclaimed government of the ‘DNR’. So, I would like to advise the source of this information not to blame the UOC immediately and indiscriminately. Our eparchy did not initiate this, they found out about it from the media, no one offered anything to our eparchy. We have enough temples, and we do not act in the East in the same way that representatives of the OCU act against us in other regions of Ukraine. Until now, we have not taken a single church from any denomination in this region, although there have been proposals.” 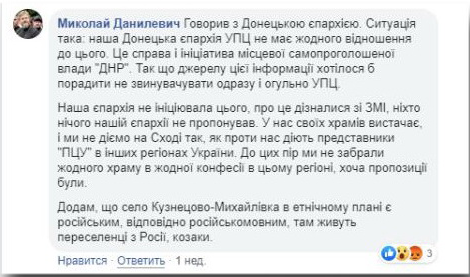 As the UOJ reported, the UOC appealed to the UN, OSCE and the EU in connection with mass violations of the rights of believers.

We recall that in October 2018, a group of UN Special Rapporteurs already sent a communication request to the Ukrainian government regarding systematic violations of the rights of believers of the Ukrainian Orthodox Church: the document raised questions concerning specific facts of human rights violations in Ukraine in connection with the seizure of UOC churches, attempts to disrupt the All-Ukrainian procession in 2016, attacks by members of the radical group S14 on the Tithe Monastery and the office of the Union of Orthodox Journalists, and others. So far, there has been no response from the Ukrainian authorities. At the same time, the “Honorary Patriarch” of the OCU Filaret Denisenko states that there have not been any seizures of UOC temples in Ukraine.