UKRAINE: Ukrainian Orthodox Church/Moscow Patriarchate is preparing a protest rally against Bills 4128 and 4511 throughout Ukraine

RISU (16.05.2017) –  http://bit.ly/2qUFarZ – The faithful of the UOC (MP) across Ukraine are protesting against the adoption by Ukrainian Parliament of Bills 4128 and 4511 scheduled for May 18. This was reported by the Information and Education Department of the UOC (MP), having received information from press services of their dioceses. 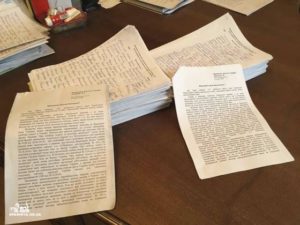 Bills No. 4128 and No. 4511, in the opinion of the UOC (MP), are contrary to the Constitution and international law in the field of freedom of religion guarantees.

Now the signatures of UOC (MP) faithful to the MPs are being collected to a call not to vote for these two bills.

The hierarchs of the Ukrainian Orthodox Church (Moscow Patriarchate) from all over Ukraine also turned to MPs with a call to “stop legal arbitrariness and discrimination of the UOC and other churches.”

According to the report of the UOC (MP), more than 52 thousand faithful of the UOC (MP) in Odessa region signed during one day an appeal to MPs of Ukraine from the region, so they did not vote in the Parliament for said anti-clerical laws. The believers are totally against interference in the internal activities of the church by the state.

The collection of signatures with the blessing of Metropolitan Agathangel of Odessa and Izmail (UOC (MP)) began on 14 May and will continue until the evening of May 15, after which all the collected signatures will be submitted to Kyiv, to Ukrainian MPs.

Metropolitan Luka urged the faithful of the Diocese of Zaporizhzhya UOC (MP) to collect signatures against the laws and to accomplish the feat of prayer and fasting in these days. He stressed that by such actions as lobbying anti-clerical laws, some public servants “are trying to involve not only our church but also our entire country into a whirlpool of Ukraine confessional war.”

The Diocese of Zaporizhia of the UOC (MP) urged the faithful to come to the prayer standing on 17 May at 17:00 on Festivalna square in Kyiv.

When addressing his flock, the ruling bishop of Kirovograd diocese of the UOC (MP), Archbishop Ioasaf also noted that “the adoption of these laws brings Ukraine back to the totalitarian Soviet past, when the state controlled the church.” “This is contrary to the fundamental principles of freedom of religion guaranteed by the Constitution of Ukraine and international legislative and regulatory acts adopted by it,” he stressed.

During the Sunday sermon, Bishop Oleksiy of Pervomaisk of the UOC (MP) said the following words to faithful: “Today we are collecting signatures against the anti-clerical laws that the Parliament of Ukraine intends to adopt. Our elected representatives who have betrayed God and his people, want to adopt laws under which everything must belong to state and the authorities could appoint bishops and clergy in churches. “In this regard, he blessed to collect signatures to a petition to MPs of Ukraine until May 18 and daily read their prayer rule and to commit fasting.

One of the authors of this bill is Victor Yelenskyy, a religious expert, MP of the faction “People’s Front”, a member of the Parliamentary Committee on Culture and Spirituality.

“The law provides that a person, regardless of their religion, has the right to switch to another confession. No matter Orthodox or Catholic, this person can become a Buddhist and vice versa. Or, for example, a person attends the church of the Moscow Patriarchate, and wants to attend one if the Kyiv Patriarchate,” says the MP, adding that the right to change faith is enshrined in all documents relating to the freedom of conscience and belief. This right is also enshrined in the Ukrainian law on freedom of conscience, but it is not spelled out how one can perform this transition.”

Thus, the authors stresses, Bill No. 4128 is intended to set some more specific rules.

Bill No. 4511 is a draft law on the special status of religious organizations, the governing centers of which are located in the state recognized by the Parliament of Ukraine as the aggressor state, which was submitted by MPs of Ukraine Petrenko, Bryhynets, Levus, Vysotsky, Medunytsya, Artyushenko, Timchuk, Tymoshenko and others.

If you want to be regularly informed about different violations of human rights in the world, click here for a free subscription to our newsletters