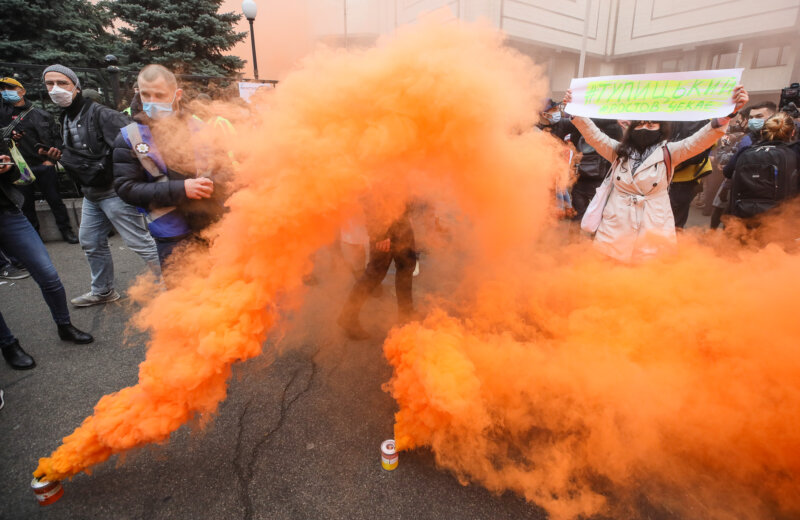 Kyiv Post (01.11.2020) – https://bit.ly/2I1LS8Z – The heads of two Council of Europe’s monitoring and advisory organizations have warned the Ukrainian parliament against the adoption of a pending draft bill that would dismiss the Constitutional Court.

Gianni Buquicchio, president of the European Commission for Democracy Through Law, also known as the Venice Commission, and Marin Mrсela, president of the Group of States against Corruption (GRECO), sent a joint letter to the Speaker of Parliament Dmytro Razumkov on Oct. 31.

The bill, initiated by President Volodymyr Zelensky, would dismiss all 15 justices of the Constitutional Court and annul a recent controversial ruling of the court that effectively destroyed Ukraine’s asset declaration system for state officials, undermining the country’s hard-won anti-corruption infrastructure.

Meanwhile, at least four judges of the Constitutional Court have been subjects of investigations concerning wrongful information in their asset declarations.

Although acknowledging the challenge of the current crisis, Buquicchio and Mrсela nevertheless consider Zelensky’s attempt to fire the judges “a blatant breach of the constitution and of the fundamental principle of separation of powers.”

In their address to Razumkov, Buquicchio and Mrсela urge to consider the “adverse, profound and long-term” implications this bill may have for Ukraine and look for “alternative ways” to preserve the country’s anti-corruption institutions.

This was Buquicchio and Mrсela’s personal address, which doesn’t represent the stance of GRECO and the European Commission for Democracy Through Law.

At the same time, according to David Arakhamia, lawmaker and faction leader of Zelensky’s Servant of the People, the European Parliament approved Zelensky’s move to fire the Constitutional Court. He also said that the country’s leadership assured envoys from the G7 countries that the new judges of the court will be selected and appointed in a transparent manner.

“There’s no alternative to the suggested annulment of the Constitutional Court,” Arakhamia said in a column for news website Ukrainska Pravda on Oct. 31.

At home in Ukraine, Zelensky’s bill has faced polarized reactions: some praised the bold move, while others criticized him for undermining the constitution and even accused him of trying to usurp power.

The head of the Constitutional Court, Oleksandr Tupytsky, accused Zelensky of attempting a “constitutional coup.”

After the scandalous ruling by the Constitutional Court on Oct. 27, Zelensky stepped in to try and save the anti-corruption reform. Through the National Defense and Security Council, he ordered on Oct. 29 to restart the declaration registry, ignoring the court’s ruling. Public access to the database was restored a few hours later, meaning that the registry had only been closed for 30 hours.

Then, Zelensky submitted the draft law, in which he accused the judges of “conflicts of interest” and of “an attempt to overthrow the constitutional order and seize state power in Ukraine.”

Photo: Protesters take part in a rally outside the Constitutional Court building in Kyiv on Oct. 30, 2020 after the Oct. 27 ruling of the court that effectively destroyed Ukraine’s asset declaration system for state officials, undermining the country’s hard-won anti-corruption infrastructure. Photo by Volodymyr Petrov.

Press coverage of the constitutional crisis