UKRAINE: How the propaganda of Fecris’ vice-president disrupted a family in Odessa 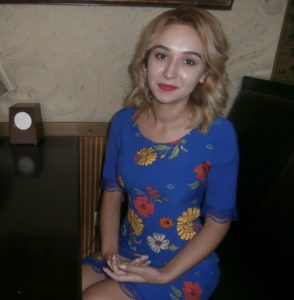 Yulia Talovaya, who was interviewed by HRWF

HRWF (03.10.2016) – Yulia Yalovaya was born in the Odessa region. She is around twenty years old and an engineering student at the Odessa Maritime University. Until September 2015, she was also a journalist for “Unsolved Crimes,” and she had a very good relationship with her parents, but the vice-president of FECRIS, Alexander Dvorkin, put an end to it… Her story is the main topic of the film realized entitled “Protect your Dignity.”

HRWF: Under what circumstances did your relationship with your parents deteriorate?

Yulia Yalovaya: In summer last year, my mother was alerted by some very negative information found on internet concerning Oleg Maltsev, the co-founder of the Redut Law Company I was working for as a journalist for his media outlet “Unsolved Crimes” newspaper. We had a long, vivid conversation, and, at the end, she said “You have to choose: your job or your parents.” I am an adult, and I decided to keep both my job and my good relationship with my parents. Without my knowledge, my mother went to the police and reported that my professional activities were criminal. On 2 September 2015, the police came to my parents’ house and asked me to follow them to the police station for a hearing. While in the car, I sent a sms to Olga Panchenko, attorney at law and director of Redut Law Company, asking her to come and help me. At that time I was still unaware that my mother was behind this illegal police investigation. My parents joined us at the police station. My mother was very excited and started pushing me onto the wall, shouting, “She is my daughter and nobody will touch her. I don’t want that sect to send her to a prostitution ring.” The whole atmosphere was very emotional. I was also crying because I realized that my mother whom I had always fully trusted was behind the whole mess. The conversation with the police officers was very strange. They were not asking questions. They were just trying to convince me that my boss was a bad man, and they wanted to know about his activities. Attorneys at law Olga Panchenko and Evgenia Tarasenko arrived with a journalist to help me. In all I was illegally kept for eight hours by the police officers and they only stopped after other attorneys and journalists arrived.

HRWF: What was the information source your mother came across on Internet?

Yulia Yalovaya: It was the website of the Saint Irenaeus of Lyons Center for Religious Studies (1) whose head is Alexander Dvorkin. The Center had been alerted by an Odessa woman, Maria Kapar (2), that the co-founder of the Redut Law Company, where I was working for the newspaper “Unsolved Crimes,” was the leader of a dangerous, destructive and totalitarian cult. Dvorkin arouses hatred and religious intolerance in people in Moscow. The information published on the site of the Saint Irenaeus Ly ons Center is not confirmed by any evidence. It’s simply a lie, and this lie has destroyed my family. Someone so easily influenced, like my mother, who is guided by the teachings of Dworkin and his false beliefs, can commit any crime. It is scary. My mother paid 12,000 dollars for my “rescue” to people like Dvorkin. They destroyed our family and introduced me as a “victim” – a person who needs “psychological rehabilitation.” These stories were broadcast on all Odessa TV channels. These people, in particular Dmitriy Bakaev, slung mud at me – people from the whole city, where I live, saw it, – and they did it for profit under the guise of Dvorkin’s extremist teachings.

HRWF: What is your relation with your family now?

Yulia Yalovaya: After all that happened, no matter how much we try, my mother and I cannot find a common language. Any attempt ends in conflict.

(1) The Center was founded in 1993 by Alexander Dvorkin with the blessing of Patriarch of Moscow and All Russia Alexy II.  The Center is also a missionary faculty department of St Tikhon’s Orthodox University in Moscow the objective of which is “to spread credible information on doctrines and activities of totalitarian sects and destructive cults”. The Center is the umbrella organization of the Russian Association of Centres for Religious and Sectarian Studies (RATsIRS) whose president is also … A. Dvorkin. The vice-presidents are Archpriest Alexander Novopashin and Archpriest Alexander Shabanov; the executive secretary is priest Lev Semenov, associate professor.

(2) Maria Kapar recently got married with a Frenchman and now lives in Strasbourg.