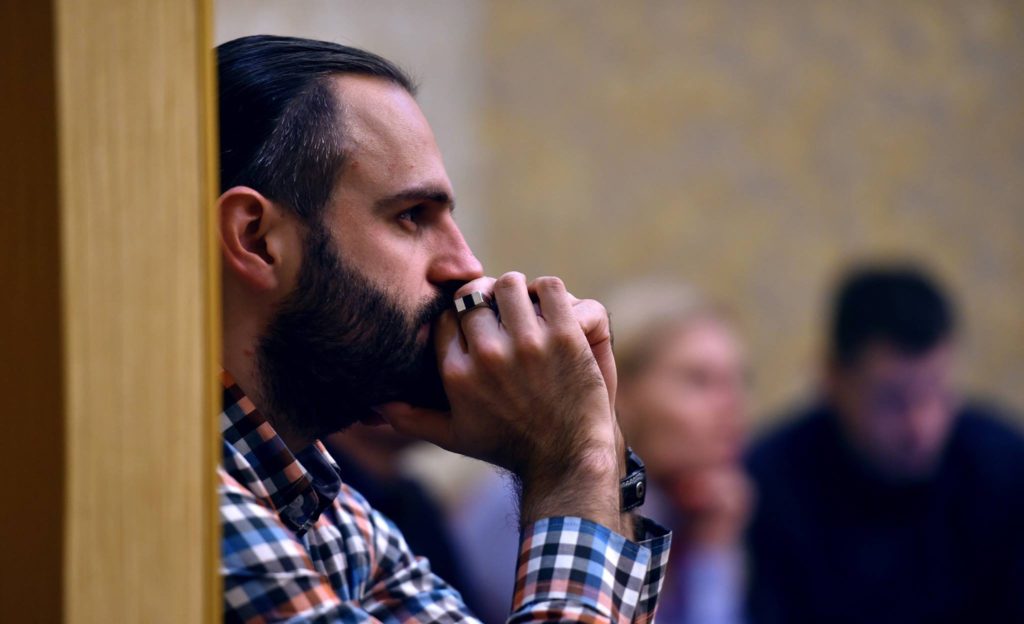 Journalist Konstantin Slobodyanyuk, who was interviewed by HRWF

Earlier this year, the director of HRWF Int’l met with, and interviewed, some victims of the media campaign demonizing them in Odessa

HRWF (05.09.2016) – Ukrainian followers of Jewish psychiatrist Léopold Szondi have been demonized and maligned by Alexander Dvorkin, vice-president of FECRIS (1), on the website of FECRIS’ affiliate organization in Russia (http://bit.ly/2csYDZv): Saint Ireneus of Lyons Center for Religious Studies in Moscow (2).

Léopold Szondi was a Hungarian psychiatrist. He is known for the psychological tool that bears his name, the Szondi test. (3)

Szondi was born on 11th March 1893 in Nitra, the former Austro-Hungarian Empire and present-day Slovakia. He was raised in a German and Slovak-speaking Jewish family. In June 1944, he was deported with his family to Bergen-Belsen concentration camp on the Kastner train (4). In December 1944, Szondi and his family, along with other prominent intellectuals, were released to Switzerland after 1,700 American intellectuals paid a large ransom to Adolf Eichmann. He continued to live there after the war. He died in Küsnacht on 24th January 1986 at the age of 92.

Szondi has a few followers in Ukraine that try to adapt his teachings to the modern world and to implement them in various contexts.

Human Rights Without Frontiers Int’l met journalist Konstantin Slobodyanyuk in Odessa and interviewed him about the nefarious influence of some of Alexander Dvorkin’s anti-sect activities in Ukraine. Slobodyanyuk is also the editor-in-chief of “Unsolved Crimes” newspaper; he shares the views of Léopold Szondi.

HRWF: When and how did your interest in Szondi’s teachings start?

Konstantin Slobodyanyuk: In 2014, Oleg Maltsev, scientist and my director, together with Michael Vigdorchik, who is well-known for his psychological diagnoses, established the Private Enterprise “International Schicksalsanalyse Community Research Institute”. Of course, the preparation for the establishment of this Institute began long before its official registration – it took a few years. During the preparation of this project, I became familiar with the works of Léopold Szondi. The research and techniques, which allow one to diagnose the conditions of a subject and predict his actions in the future, are extremely important in journalism, especially in the case of our profile edition “The Unsolved Crimes” newspaper.

HRWF: What is “Unsolved Crimes” newspaper?

Konstantin Slobodyanyuk: “Unsolved Crimes” newspaper is a non-profit legal entity that was officially registered on the 13th of November 2014 under the series and certificate number OD 1742-613P. “Unsolved Crimes” only prints a minimum of official editions, as required under the law of Ukraine, but it is strategically focused on internet.

Originally, the “Unsolved Crimes” newspaper was created as a mass media outlet of the Redut Law Firm in Odessa, in order to cover issues related to criminal justice in Ukraine. Also our goal was to give our colleagues (other attorneys at law who do not work for our company) a chance to speak freely in a legally recognized mass media, and some of our colleagues gratefully took advantage of this opportunity.

Eight journalists work for the “Unsolved Crimes” newspaper. One of them, Yulia Yalovaya, was a victim of the activities of Alexander Dvorkin.

HRWF: What is Redut Law Firm?

Oleg Maltsev is also the founder and director of the Private Enterprise “International Schicksalsanalyse Community research Institute”. In the last 20 years Oleg Maltsev has conducted a series of fundamental scientific researches in the field of applied history, depth psychology, human memory and consciousness. He is also the author of dozens of intellectual property rights objects. In addition, Oleg Maltsev is preparing a PhD in psychology.

HRWF: Who was behind the public campaign against Oleg Maltsev?

Konstantin Slobodyanyuk: It all started in 2012. One of the scientific seminars of Oleg Maltsev was attended by Maria Kapar. As it turned out later on, Maria Kapar had graduated from an Orthodox theological seminary, and for about 10 years she had served in a Russian Orthodox Church in Odessa. In 2014, it came to light that she had illegal business in Odessa. To cover up this illegal business, Maria Kapar misused one of the brand names of a company that had an agreement with Oleg Maltsev without his permission and his knowledge (5). Under cover of the opening of an art exhibition, Maria Kapar held a gathering with men and women who drank alcohol and had sexual activities in a private house. According to the laws of Ukraine, this kind of place is called a place of debauchery and is punishable by criminal law. When Oleg Maltsev heard about this, he took the necessary measures to stop this illegal activity.

All these actions were carried out with the collaboration of Alexander Dvorkin, Alexander Neveev, and the Saint Ireneus of Lyons Center for Religious Studies in Moscow.

HRWF: Which media and journalists were behind the campaign against the followers of Léopold Szondi?

Konstantin Slobodyanyuk: The Ukrainian journalists who spread the lies of Maria Kapar, Alexander Dvorkin and Alexander Neveev are:

Dmitry Bakaev (journalist of “Dumskaya TV”, a friend and fan of Alexander Neveev)

Yulia Yalovaya learnt from her father that her mother had spent $ 12,000 to fight Oleg Maltsev (7). There is an audio recording available, where the mother of Yulia argues that she is ready to sell her apartment and her car just to hurt Oleg Maltsev.

HRWF: What sort of results do you expect from your action against FECRIS affiliates in Russia with regard to their activities in Ukraine?

Konstantin Slobodyanyuk: We have already reached our objective. The anti-cultists’ actions have stopped. Some people, who work with Dvorkin, put an end to their activities. More than ten criminal cases in total were instituted against these persons. We have shown by example that it is possible to fight effectively and terminate the activities of such scoundrels as Dvorkin, Neveev, and corrupt journalists such as Bakaev, Podnebesnaya, and Kovalyova. As a result, Oleg Maltsev, my boss, created “The Cavalier” organization, which today helps several structures to protect themselves effectively from religious extremists’ attacks.

HRWF: This month there will be an important human rights conference of the OSCE/ ODIHR in Warsaw. Several sessions will be devoted to freedom of religion or belief, religious discrimination, and intolerance. Are you planning to participate in it and testify?

Konstantin Slobodyanyuk: If we can get a visa in due time, we will go.

Alexander Dvorkin was a persona non grata in Ukraine. In May 2014, he complained in numerous Russian media that he was denied entry in Ukraine because of the international “sectarian lobby” behind the Maidan movement in Kyiv. He had been invited by the Archbishop of Lugansk and Alchevsk Mitrofan (Ukrainian Orthodox Church/ Moscow Patriarchate) to give some lectures about sects on 9-10 April in Lugansk (Eastern Ukraine). He was denied entry in Ukraine at the airport of Donetsk and sent back to Russia. The official reason justifying his deportation was that he had been seen with the wife of Gubarev, the self-proclaimed governor of Donetsk.

Like other pro-Russian and Russian Orthodox extremists in Ukraine, Dvorkin discredited the Maidan movement, saying that the Acting President, Alexander Tourtchynov was a Baptist – which is true –, his Prime Minister Arseni Yatseniuk was a Scientologist whose sister chaired a major scientologist organization in the USA – both accusations that were spread by Interfax-Religion, a Russian press agency, were found to be false by Human Rights Without Frontiers.

With such allegations, he wanted to show that the Maidan movement was an American plot supported by non-Orthodox/ anti-Orthodox new religious movements and that “foreign sects” were then in power in Kyiv with some extreme-right elements. See http://bit.ly/2cdQDe6 (5 March 2014)

RATsIRS groups together regional Orthodox anti-sect organizations in the post-Soviet space. A non-exhaustive list of the member organizations can be found in the book “Freedom of Religion or Belief, Anti-Sect Movements and State Neutrality: A Case Study: FECRIS” published in English in 2012 by the University of Dresden with Human Rights Without Frontiers. The list of those Orthodox anti-sect groups affiliated to the Russian branch of FECRIS can also be found on pages 164-166 of the electronic version of the book: http://bit.ly/2bDqBQy.