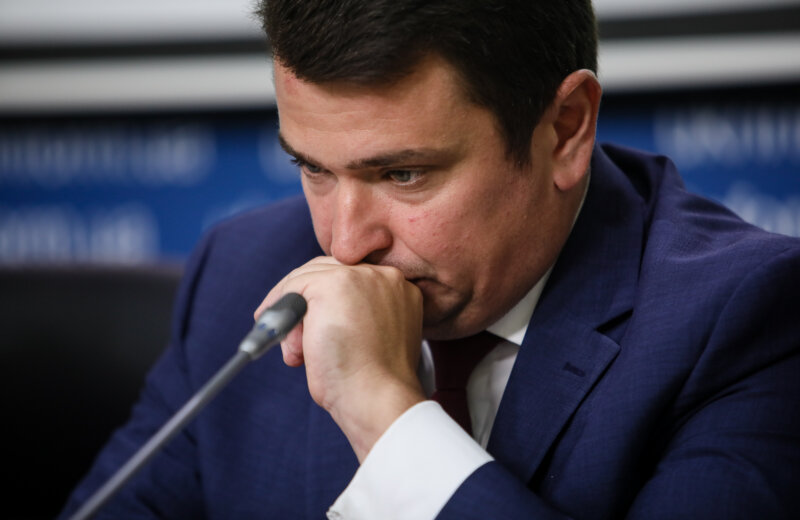 Kyiv Post (26.10.2020) – https://bit.ly/3msdX8z – The Kyiv District Administrative Court has ordered the dismissal of Artem Sytnyk, head of the National Anti-Corruption Bureau of Ukraine (NABU), two sources familiar with the matter told the Kyiv Post on Oct. 26.

The sources spoke on condition of anonymity because they were not authorized to speak with the press.

One of the most controversial legal bodies in Ukraine, the Kyiv District Administrative Court is led by judge Pavlo Vovk, who is currently a suspect in a graft case investigated by NABU.

It instructed the Ministry of Justice to register Sytnyk’s official dismissal based upon a Constitutional Court ruling according to which Sytnyk’s appointment in 2015 was unconstitutional.

The court also instructed the State Investigation Bureau to open a criminal case against Sytnyk on charges of failing to implement a Constitutional Court ruling and usurpation of power.

The administrative court’s decision appears to be part of a broader conflict between Vovk and Sytnyk. It can be appealed to a higher court.

Civil society activists feared that the rulings would lead to the dismissal of Sytnyk, his replacement with a loyalist to the corrupt establishment and the destruction of the NABU’s independence.

In July, NABU charged Vovk and other judges of his court with organized crime, usurpation of power, bribery and unlawful interference in the work of government officials. The bureau released audio recordings of the judges that back up the accusations.

The Kyiv District Administrative Court’s ruling comes just days ahead of an Oct. 29 hearing on bail for Vovk in the corruption case.

That same day, the Slidstvo.info investigative journalism show is scheduled to release an investigation into Vovk’s alleged corruption.

Meanwhile, a petition on the site of the President’s Office for the liquidation of Vovk’s court collected the required 25,000 signatures on Oct. 26. It must now be reviewed by the president.

Civil society views the Vovk case as one of the most egregious examples of judicial corruption and impunity.