UKRAINE: Coalition of religions and believers to ban the Gay Pride in Odessa

Dumskaya (20.08.2019) – “Undermining the reputation of the city”: the Moscow Patriarchate, along with individual Catholics and Protestants, asks Trukhanov to ban the LGBT march in Odessa

A number of religious organizations in Odessa addressed Gennady Trukhanov, the mayor of Odessa, a one-million city on the Black Sea, asking him not to allow the LGBT action “Pride-2019” to be held in our city, announced for the second half of August.

The authors of the document cite the Bible and the 51st article of the Constitution of Ukraine, which states that “marriage is based on the free will of men and women”, and “family, childhood, motherhood and fatherhood are protected by law.” 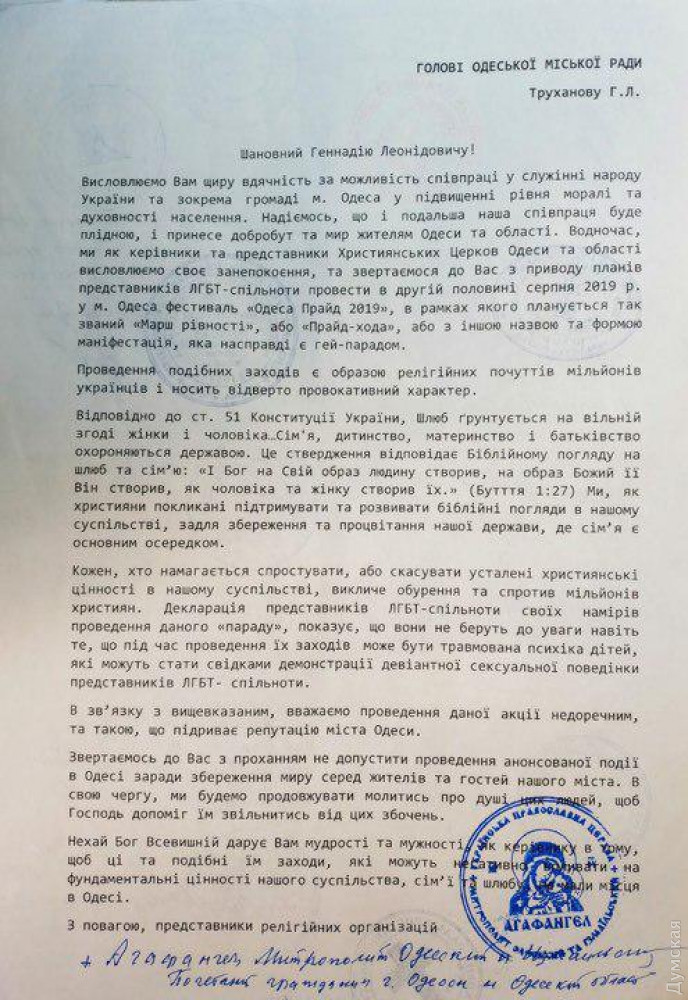 Signatories believe that the march of sexual minorities in Odessa is “inappropriate” and “undermines the city’s reputation.” They beg the mayor not to allow the Pride “for the sake of peace among the residents and visitors of the city” and promise to “pray for the souls of these people so that the Lord will help them free themselves from perversions.”

The first signature on the appeal was put by the Metropolitan of Odessa and Izmail Ukrainian Orthodox Church (UOC) of the Moscow Patriarchate Agafangel. Also there are autographs of Odessa representatives of one of the Jewish communities(not the largest); Armenian Apostolic Church; Roman Catholic and Ukrainian Greek Catholic Churches; several Protestant organizations, including those whose believers were displaced from the occupied territories of Ukraine by Russian-backed fighters in the Donbas. Muslimsand the Orthodox Church of Ukraine (OCU)ignored this initiative.

In the Odessa Exarchate of the Ukrainian Greek-Catholic Church (UGCC), they told us that the letter was signed by Father Superior Ruslan Ostafy, Rector of the Cathedral of St. Andrew, and this is his personal initiative. Moreover, when the Greek Catholic put his signature and seal, the signatures of Agafangel (Savvin) were not there.

Roman Catholicshave not yet commented on the situation. The appeal is signed by Bishop Bronislaw Berndsky, but it is well known that he is already at an advanced age, seriously ill and has not managed dioceses for a long time, where he has been appointed bishop-coadjutor (acting) – Stanislav Shirokoradyuk. Only the latter can officially represent the Catholic community of the south of Ukraine in such matters, but Father Stanislav did not sign the paper. According to our sources in the capital, the apostolic nunciature (Vatican Embassy) in Kiev urged the Catholic communities not to actively participate in such initiatives, especially if they come from the Moscow Patriarchate. 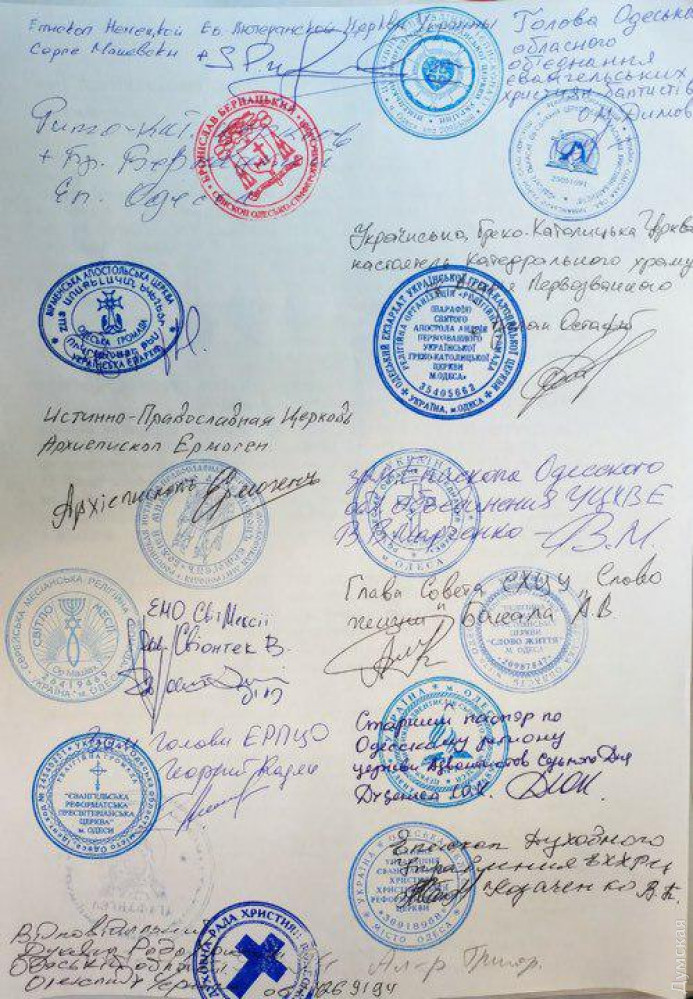 HRWF Translation/adaptation of the article of Sergey Konkov/Reuters