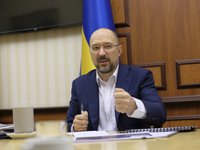 The prime minister noted that today the average wage is UAH 11,000, and the average pension is UAH 3,000.

“Probably this is not enough, I would like Ukrainians to receive more decent wages and pensions,” Shmyhal stressed.

One can wonder if such a Prime Minister saying a pension of 150 EUR per month would be sufficient to live deserves his position. This amount is not even sufficient to pay the bills for heating, electricity, water and other utilities.

Currently, the average pension is around 90 EUR, much lower than what he says.

Poverty of Ukrainian citizens is the price they pay in their daily lives for the unsolved corruption problems in government, parliament, judiciary and business since the independence.