UKRAINE: Are militants in the Donbass preparing to mobilize? An exceptional video 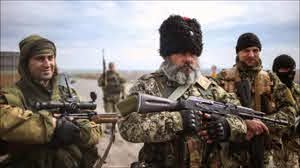 Exceptional video footage and reporting from inside Donbass.

The video can be watched here: https://www.youtube.com/watch?v=v4nuuKS_Q9g&list=PLRVLFiynwHmGJVXK7f82zMVyw9X7FLHVQ&index=3.

HRWF (03.12.2020) – New video footage documents that the so-called “L/DPR” is in the midst of assessing how many men could be mobilized for its “armies” in the Donbass Region, which is not controlled by the Ukrainian government. The leader of the so-called “DPR”, Denys Pushilin, issued a “decree” that obligated citizens to arrive at “military commissariats”. This officially took place between 23-27 November 2020, but locals said this process continued unofficially for a few weeks more. Ukrainian military intelligence says that this could be the first step towards illegal “mobilization” of militant forces against the Ukrainian army in the Donbass conflict.

English transcript of the video footage below

A car arrives at the military commissariat in Donetsk. Men periodically exit through the gate with a large inscription: “Pre-gathering point of citizens”. In this region, which is beyond the control of Ukraine, militants send a SMS from the subscriber Police DPR. Their message to citizens is to come with a passport to the military commissariat within a specified time frame. ((off-screen))

“At the military training camp? I will go. Why wouldn’t I go?”

“I gave my debt to my homeland. I served as expected for two years. I think that’s enough. I’ll go, of course. The state ordered it. We have to go.”

“I just got a text message on my phone. However, I did not receive a summons specifically for me.”

“This is understandable. They cannot say that they will not go to serve, because then the militants will come and take them, in principle. (…) I monitor social networks and I don’t see any desire from parents to send their children to serve in this so-called army. I do not see any desire from young people. I see the opposite – reluctance. And people are really ready to go even to Russia, if they are now blocked access to Ukraine, just to avoid this.” ((On camera – Sergey Harmash, participant in negotiations of the Minsk Trilateral Contact Group, journalist))

The militants do not hide their actions. Even the so-called “decree” was published. They claimed that counting the men eligible for fighting would take about five days. Sergey Harmash says this process has lasted much longer. ((off-screen))

“This process has been going on for at least a month. People told me that they were receiving summons from Donetsk. At the same time, the decree of the so-called chapter appeared just a week ago. This means that in Donetsk they tried to hide [the process of mobilization]. If they are trying to hide [the process of mobilization], then this is clearly not propaganda. This, instead, is for actual mobilization. Real mobilization. Again – if we are monitoring their social media in parallel, then we see that a propaganda campaign that everyone should serve is growing. A campaign about the conscription [of each man].” ((Sergey Harmash, participant in negotiations of the Minsk Trilateral Contact Group, journalist))

“And here it is worth remembering that the truce in the Donbass is still active. The other day, the commander in chief of the Armed Forces of Ukraine, Ruslan Khomchak, said that in more than 120 days of the ceasefire, 14 Ukrainian military were injured. Four soldiers died. The last incident was on 25 November when a militant sniper mortally shot senior soldier Vyacheslav Minkin.” ((Roman Pahulych, correspondent for the Radio Liberty in Ukraine))

These are the positions of the Ukrainian army near Gorlovka that are controlled by the militants. Enemy snipers were also spotted here – it’s just as dangerous as before the truce. However, the military is carefully monitoring enemy positions. ((off-screen))

“About three new positions and one new blindage were created since we have been here. And we have also noticed that they are improving old positions for firing.” ((soldier of the Armed Forces of Ukraine, nickname “Achilesse”))

Marines say gunmen are opening fire more and more often. It is believed that the armistice will soon end. ((off-screen))

“It all began with the usual provocative shootings. Now they have moved to the next level, so to speak, and intensively fire machine guns and grenade launchers every day.” ((soldier of the Armed Forces of Ukraine, nickname “Achilesse”))

“The last few weeks have already begun, in principle, a war. We can forget about the truce. It only remains to wait for the artillery to start working.” ((soldier of the Armed Forces of Ukraine, nickname “Deputy”))

Here we heard about preparations for mobilization in the territory beyond the control of Ukraine. ((off-screen))

“Today they have a problem with a lack of support. There is no longer a number of people who want to come from Russia. Nobody wants to die for 500 bucks. If you look in the DPR and LPR today there is a curfew as in a concentration camp. I wouldn’t be surprised if they ‘drive people with sticks’ to the military commissariats.” ((soldier of the Armed Forces of Ukraine, nickname “Deputy”))

However, in Donetsk, they also believe that not everything is clear with the truce. ((off-screen))

“Not everything is straightforward with the truce.”

“I don’t see a truce at the moment. This is not a truce.”

“In my opinion, Ukraine is doing everything possible to delay martial law.”

“Cities have been shelled before and are now being shelled again. The war continues.”

“The Ukrainian side does not want to reconcile with us.”

“For several years, the structure of the army of militants has not changed much. The same goes for the amount of equipment. There are about 500 tanks, twice more various armoured vehicles and about 1,000 artillery systems – barrels and rockets. The staff of the 1st and 2nd Army Corps is about 35,000 people. 3,000 of them are Russian military.” ((Roman Pahulych, correspondent for the Radio Liberty in Ukraine))

4’55” – 5’31”: Vadim Skybytsky, representative of the Main Intelligence Directorate of the Ministry of Defense of Ukraine

“The staffing of the main units of the 1st and 2nd army corps is 75-80%. At the same time, it should be noted that the rear and support units are more staffed. To date, the 2nd army corps is more staffed. And this is understandable because there is less tension. Regardless, there is an outflow of military personnel and a decrease in the mobilization resources of the military because most of the population leave for Russia.” ((Vadim Skybytsky, representative of the Main Intelligence Directorate of the Ministry of Defense of Ukraine))

In the Donbass, which is not controlled by Ukraine, a so-called military training camp takes place every year. The most massive was back in 2017 – then, 30,000 people gathered at Saur Mogila according to the militants. True, they were taken from everywhere and sometimes even involuntarily. ((off-screen))

“All military reservists [in the NGCA] were recorded [by the Russian Federation]. They were attributed to military units and divisions and after that control events were carried out. But this year there was a problem with the shortage of mobilization resources. This problem was suddenly identified during training events and inspections of the 1st and 2nd army corps by the general staff of the Russian armed forces in Ukraine territory. And now [the Russian side] is trying to urgently solve this problem [the shortage of mobilization resources].” ((Vadim Skybytsky, representative of the Main Intelligence Directorate of the Ministry of Defense of Ukraine))

Intelligence says that so far this is not full mobilization, but preparation for it and, possibly, for the creation of new units. For example, it could be for territorial defense. A significant increase in local militants in groups is a problem for Ukraine. ((off-screen))

“If conscripts serve, this changes the picture of the whole conflict. There will no longer be Russian mercenaries. There will be former and current Ukrainian citizens. Not all of the youth will be able to get Ukrainian passports, but they will be Ukrainian citizens from our point of view. It will then be easier for Russia to say that this is a civil conflict.” ((Sergey Harmash, participant in negotiations of the Minsk Trilateral Contact Group, journalist))

Obviously, the DPR group wants to know how many people they will be able to arm. Given the non-payment of salaries at enterprises and closed checkpoints by militants, there are few options for the local population to earn an income – they can take an assault rifle or go to Russia. ((off-screen))

Roman Pahulych is a journalist for the Donbass Realities project and Radio Liberty in Ukraine. For more information, please contact him at: PahulychR-FL@rferl.org.