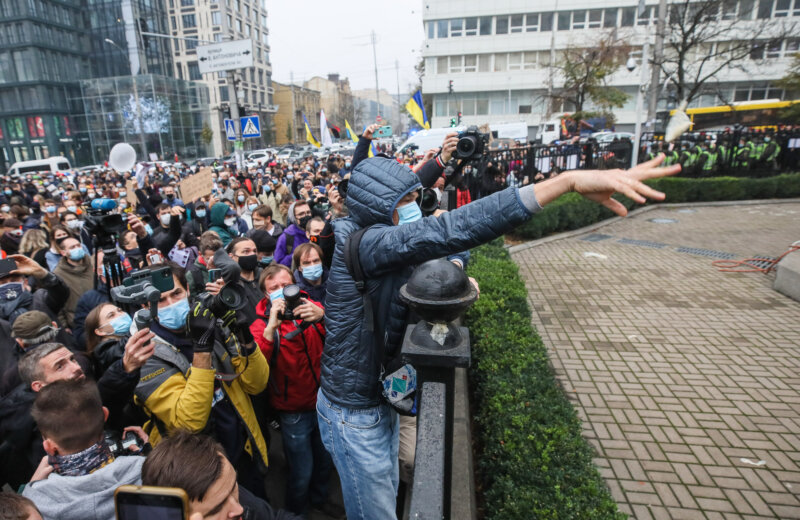 Kyiv Post (03.11.2020) – https://bit.ly/360EqDC – On Oct. 27, the Constitutional Court of Ukraine (CCU) adopted the decision on the unconstitutionality of the system of electronic assets declarations, criminal liability for false statements in declarations, and powers of the National Agency on Corruption Prevention (NACP). In fact, the decision means the abolition of the system of asset declaration disclosure of public officials and destroying a significant part of the anti-corruption achievements of the Revolution of Dignity. The decision was adopted with 11 votes.

The analysis of the decision indicates that the CCU went beyond the constitutional appeal and in fact violated the Constitution of Ukraine. The constitutional review was initiated by pro-Russian and oligarchic forces and was considered in record time. This decision can in no way be considered independent, as there is every reason to say that the judges of the CCU acted in their own interests, because of the fact of their own violation of the anti-corruption legislation which they repealed.

The CCU justified its decision in a way that it will be impossible to reinstall criminal liability for false statements in asset declarations back to the Criminal Code as the CCU justifies that such an offense should not be a subject of criminal penalty at all. As for the rest of the provisions, the CCU does not provide for the justification of the unconstitutionality of most of the rest abolished provisions. Any Parliament’s attempts to reintroduce those provisions back to the legislation will result in the CCU striking them out again. The CCU’s decision also makes impossible further judicial reform already agreed by Ukraine with the international partners and established within the International Monetary Fund program and macro-financial agreement with the European Union. The CCU states that only the judicial body either can perform any checks on judges or exercise control over them, thus making impossible establishment of independent expert bodies trusted with integrity checks of High Qualification Commission of Judges and High Council of Judges, which has been agreed as the basis of judicial reform.

The decision created the deadlock which provoked a constitutional crisis as there is a real risk that with any consequent decision the CCU will further dismantle the constitutional order and recent reform achievements. Thus, on October 29, the Security and Defence Council adopted the decision to declare the CCU decision void and dissolve the current composition of the court. Following it, the President submitted the relevant draft law to the Parliament. This is a political solution to resolve the situation, protect the constitutional order, and anti-corruption reform. At the same time, the draft law lacks new procedures to guarantee the fair and transparent selection of new judges of the CCU. Adopting such provisions would be crucial for reinstalling public trust in the CCU and rule of law.

On Oct. 28, President Volodymyr Zelensky responded to the e-petition to launch a liquidation of the notorious Kyiv District Administrative Court, which gained the necessary 25,000+ votes. He promised to submit the respective draft law to the Parliament following the consultations with the High Council of Justice. The latter is an obligatory step required by the legislation.

It is worth noting, that on Oct.  26, the KDAC made another illegal and controversial decision. The court ordered to illegally dismiss NABU director Artem Sytnyk and launch a criminal investigation into his actions.

SAPO’s head Selection Commission approves the rules of the procedure

On Oct. 29, the Commission for the Selection of the Head of the Specialized Anti-Corruption Prosecutor’s Office (Commission) continued its work. It elected the Chairman and the Secretary (both are nominees of parliamentary group “For the Future”). The Commission has determined that it will make all decisions by a qualified majority of 7 votes, of which 5 members should be delegates of the Parliament and 2 members should be delegates of the Council of Prosecutors. Such a procedure will allow taking into account the voices of international experts.

On Oct. 27, following AntAC’s appeal, the High Anti-Corruption Court canceled the illegal closure of the criminal investigation on the “Rotterdam+” case committed by SAPO prosecutor Vitaliy Ponomarenko. However, the case will still not have a chance to be properly investigated if Ponomarenko remains the prosecutor. Now only Prosecutor General Iryna Venediktova, who has previously refused to review and overturn his blatantly illegal decision to close the case, can replace a biased prosecutor.

Photo: An activist throws condoms at the Constitutional Court during a rally demanding the judges come resign after their controversial ruling on the anti-graft laws in Kyiv, on Oct. 30, 2020. Photo by Volodymyr Petrov.

Media coverage of the constitutional crisis