Ukraine: 1030th anniversary of the Kievan Rus Christianization on a background of high tensions

The police is on full alert. 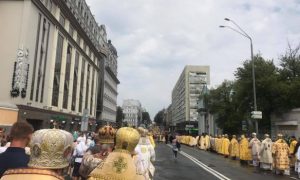 Yevstratіy Zorya/Facebook – 5,000 police officers and 5, 000 officers of the National Guard will provide the security

112 International (24.07.2018) – https://bit.ly/2JZkGDd – About 100,000 people, parishioners of the Ukrainian Orthodox Church of both Kyiv and Moscow Patriarchates, will participate in the sacred procession that will take place on July 27 and July 28 due to the Kievan Rus Christianization. The security measures will be the same as the previous year. Andry Kryshchenko, the Head of the Kyiv National Police claimed this as Interfax-Ukraine reported.

About 5,000 law enforcers will provide the order at the streets.

Moreover, Deputy Interior Minister Serhy Yarove claimed that 5,000 officers of the National Guard will be attracted to the support of the Kyiv police these days.

As it was reported earlier, sacred processions and solemn prayers will be held in the capital dedicated to the celebration of 1030 th anniversary of Kievan Rus Christianization. This is why the traffic will be restricted in downtown.

Last year’s religious procession started in Ternopil and Donetsk regions, brought the two groups of believers to enter Kyiv on July 26, meet on July 27 in Kiev at St. Vladimir’s Hill, and together with the Orthodox Kyiv citizens and pilgrims proceed to Kyiv-Pechersk Lavra. The expected number was 30 000 participants, however, there were more than 4,500 pilgrims at Volodymyrska Hirka a year ago and around 6 000 people took part in celebration of Baptism of Rus last year. Law enforcers expected a high number of provocations by pro-Russian activists or Kremlin-backed militants, tightening preventive measures, however, there were no serious violations reported.

Interfax (25.07.2018) – http://www.interfax-religion.com/?act=news&div=14385 – The OSCE officials registered all the facts of impeding the Ukrainian Orthodox Church believers in participating in the procession with cross on the Day of the 1030th Anniversary of Russia’s Baptism, the UOC Information and Education Department reported on Wednesday.

Archbishop Kliment of Nezhin and Priluki reported the facts of violating believers’ rights at his meeting with officials of a special OSCE monitoring commission in Kiev.

The archbishop told the officials about problems experienced by the believers who wanted to come to Kiev for participating in the procession with cross on July 27.

UNIAN (26.07.2018) – https://bit.ly/2NMMjBL – In general, a new Russian narrative is being pushed into Ukraine’s agenda – “religious war and the genocide of Orthodox believers.”

Following the fake news on Ukraine allegedly trying to “bribe Patriarch Bartholomew,” spun by Russian propaganda and its collaborators in Ukraine, certain representatives of the Moscow Patriarchate of the Orthodox Church in Ukraine decided to add fuel to the fire with yet another fake report.

On Wednesday, representative of the Moscow Patriarchate, Protopriest Nikolai Danylevych, said that Kyiv allegedly intended “to create during celebrations of the Baptism of Kievan Rus a picture of mass support” for the idea of autocephaly.

According to Danylevych, “free shuttle buses are being provided, whole railway cars are being booked, and many people are coming [to Kyiv] who have no relation to the Church,” according to Information Resistance, a Ukraine-based OSINT NGO.

Developing his manipulative idea, Danylevich asserts that these attempts “will not help” Kyiv to influence the position of Patriarch Bartholomew, which is strange because they shouldn’t – the Constantinople has been positively consistent on the Ukraine issue, thus apparently irritating Moscow.

In general, a new Russian narrative is being pushed into Ukraine’s agenda – “religious war and the genocide of Orthodox believers.”

Experts note that this is reminiscent of the events of 2014, when the slogan was “to protect Russian-speakers in Ukraine”, and today it sounds like “protecting the Orthodox believers in Ukraine.”

In this regard, a reasonable question arises: are the Russians launching the initiative only within a new round of information war or, as it was 2014, preparing public opinion for larger-scale provocations and more aggression against Ukraine under the guise of “saviors from the DPP-LPR”?”

In fact, no one wants to save those “Russian-speakers” anymore, most of whom Moscow left to the mercy of fate in Donbas. At the same time, voicing a new call, this time “To our God, our Orthodox faith and our Tsar” Moscow once again expects to recruit new ‘useful idiots’,” IR wrote.

As Donbas blogger Aleksandr Chernov recently reported, in the occupied part of Donetsk region, self-styled Russian-controlled “authorities” are actively collecting groups of locals to be sent to Kyiv to “support” opponents of Ukrainian Orthodox Church independence from Moscow. These people will participate in “events” organized by the so-called “UOC-MP” on the day of the Baptism of Kievan Rus.

According to information available, it is about deploying a nearly 200-strong group of men.

At the same time, participation is funded, at RUB 20,000 per person. It is noteworthy that the funds are taken from local business.

As UNIAN reported earlier, Ukrainian MP Vadym Novinksy, an ardent supporter of the Moscow Patriarchate from the entourage of disgraced ex-president Viktor Yanukovych, is also contributing to artificially raising the temperature of public tensions ahead of the Baptism celebrations.

In a recent interview with LB.ua he claimed he would personally defend the Kyiv Pechersk Lavra against supporters of Ukrainian church’s independence, hinting at possible violence that the Russian propaganda claims will ensue if the Constantinople grants autocephaly to the Ukrainian Orthodox Church.

Mass baptism of 500 Protestants in the Dnipro river 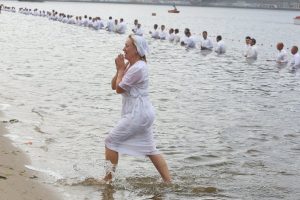