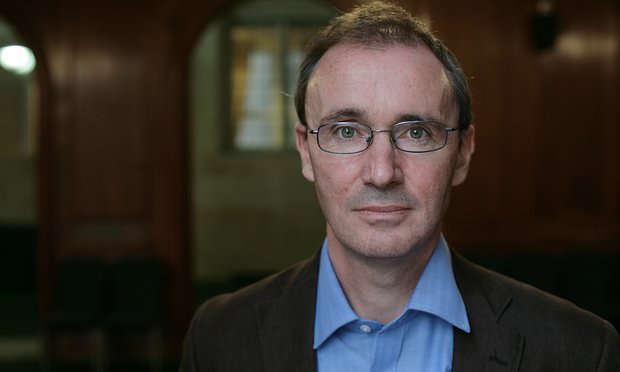 Nicholas Chamberlain, the bishop of Grantham. Photo via: http://bit.ly/2c0Vi0Q

The Guardian (04.09.2016) – http://bit.ly/2c0Vi0Q – Fourteen Church of England priests who have married their same sex partners have urged Anglican bishops to be bold and take the church forward in its stance on homosexuality and gay marriage.

Their move follows the bishop of Grantham’s disclosure that he is in a same-sex relationship. Nicholas Chamberlain is the first bishop to openly declare that he is gay.

The gay and lesbian clergy, plus an additional eight lay members of the church in same sex marriages, signed a letter to bishops – who are meeting next week – urging them to “give a clear lead that offers a way forward to greater inclusion” of LGBTI people in the church.

It adds: “We encourage you to be bold, and to be honest about what many of you already believe from your own experience, and to what you know to be increasingly the direction of travel, not just in our church but in many churches in this country.”

Eight of the clergy and their spouses have signed the letter in their own names – some revealing their married status for the first time. A further six have withheld their names to protect themselves or their bishops who have privately supported them.

The Church of England officially forbids its clergy to marry same-sex partners, although some bishops have chosen to issue reprimands rather than strip individuals of their licence to act as priests.

The letter was organised by Andrew Foreshew-Cain, who married his partner in June 2014. He continues to work as vicar of vicar of St Mary with All Souls, Kilburn and St James, West Hampstead following an “informal rebuke”.

The signatories to the letter acknowledge that “the time may not yet be right for a change in the church’s official understanding of marriage. But many in our parishes have already made that move, and it is time to respect that a diversity of theology within the church exists and that there may be more than one understanding of what a faithful Christian may believe on these issues”.

On Friday, Chamberlain revealed in an interview with the Guardian that he was appointed as a bishop last November with Justin Welby, the archbishop of Canterbury, fully aware of his sexual identity and the fact that he was in a long-term, albeit celibate, relationship.

Welby said in a statement that Chamberlain’s sexuality was “completely irrelevant to his office”.

A conservative organisation within the Anglican church said on Saturday that the disclosure was a “serious cause for concern” and that his appointment was a “major error”.

Gafcon, which represents conservative Anglicans worldwide with a particularly strong presence in the US and Africa, issued a statement on Saturday saying that Chamberlain’s public acknowledgement of his sexuality would “exacerbate … divisions within the Church of England and throughout the wider Anglican Communion”.

But Gafcon, which is at the forefront of a global campaign to hold the Anglican church to traditional teaching on sexuality and marriage, has accused the C of E of presenting a fait accompli over Chamberlain’s appointment.

In a statement, it acknowledged that Chamberlain was conforming to bishops’ guidelines, which stipulate that same-sex relationships must be celibate, and that he had not publicly campaigned for a change in the church’s traditional teachings on sexuality and marriage.

But, it went on, “there are aspects of this appointment which are a serious cause for concern for biblically orthodox Anglicans around the world, and therefore we believe that this appointment is a major error”.

It referred to an outcry among conservatives in 2003 when Jeffrey John, now the dean of St Albans, was a candidate for the post of bishop of Reading while he was in a same-sex relationship. John withdrew his candidacy.

Gafcon said: “In this case, the element of secrecy in the appointment to the episcopacy of a man in a same-sex relationship gives the impression that it has been arranged with the aim of presenting the church with a ‘fait accompli’, rather than engaging with possible opposition in the spirit of ‘shared conversations’.”

“Shared conversations” is the C of E’s phrase for a process of protracted internal discussions on issues of sexuality that has been taking place over the past two years.

LGBTI Mission, a C of E group that advocates acceptance of lesbian and gay Christians, said it welcomed the openness shown by Chamberlain. In a veiled reference to other gay bishops, it said it hoped Chamberlain’s public comments would lead to “increased openness among bishops so that the burden does not long remain on the bishop of Grantham alone”.

However, it added, the church still adhered to “a discriminatory policy of purposeful concealment” in its senior appointments. “The need to review the absurd and cruel double standard still applied in relation to sexual conduct of the clergy remains an urgent task for the church.”

The C of E’s College of Bishops will meet next week to determine the church’s next move following the “shared conversations”, which are now at an end.

Conservatives fear that the C of E is moving – albeit slowly – towards a more open accommodation of LGBT people, both in its congregations and among its clergy and hierarchy.

Welby is believed to have had a change of heart on the issue over recent years. At a Christian festival last weekend, he said he was “constantly consumed with horror” at the church’s treatment of lesbians and gay men.

A meeting in recent days of conservative C of E parishes to discuss their response to what they see as a watering down of biblical authority on sexuality and marriage was billed as a potential first step to a split in the church.

However, senior C of E figures are thought to be relatively relaxed, believing it is unlikely that a significant number of clergy and congregations would leave the church over the issue.