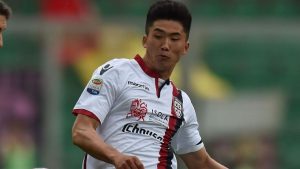 HRWF (07.12.2017) – Han Kwang-Song and Choe Song Hyok are two 19 year-old North Koreans who are currenty playing football in Perugia, Italy. It is reported that the North Korean government was directly involved in the creations of contracts for the two players.

In 2012, a discussion between Pyongyang and Italian Senator Antonio Razzi began.

In 2014, an Italian delegation, lead by Senator Razzi, and comprised of several football recruiters and coaches, traveled to North Korea to build diplomatic and friendly relationships, partially through the common interest of football.

Later that year, Han Kwang-Song and Choe Song Hyok were recruited to play for Italian football teams by Alessandro Dominici, the owner of Italian Soccer Management, a company which specializes in recruiting and training young athletes.

Choe signed his first contract with the Fiorentina team. Immediately, rumors began to flow of his salaries final destination being Pyongyang.

It is commonly known amongst experts that North Korean overseas workers do not get to keep their salaries, or even the majority of their salaries –  reports estimate the Pyongyang usually takes between 70-90% of the earnings, leaving the individual with 10-30% of their earnings.

In the spring of 2016, Michele Nicoletti, a member of the Italian parliament’s committee on foreign affairs, expressed concern that North Korea is ‘extorting salaries’ from these athletes, and called on the foreign ministry and ministry of labour to investigate.

After reviewing Choe’s contract and payment procedures closely, it seems that the football club was paying his salary directly into Choe’s bank account. However, investigators could not tell where the money went following this initial transaction.

Commenting on the rare case of the North Korean football players, the New York Times suggested that the regime’s increasing interest in training football players may hint at the players’ proven financial benefit:

“The entire initiative, experts said, is in line with a pattern of behavior from the North Korean government in recent years apparently meant to bolster the country’s soccer fortunes. In 2013, the government opened the Pyongyang International Football School to train a few hundred of the country’s best young players. In 2016, Jorn Andersen, a German citizen born in Norway, became the first foreigner in almost three decades to coach the North Korean men’s national team.

Christopher Green, who has interviewed more than 350 North Korean defectors as part of his research on the political landscape of the country, said that even physical education classes in the country’s schools began placing a greater emphasis on soccer in recent years. “North Korea has always had an interest in developing sporting talent — that’s not new — but the focus on football seems to be new,” Green said.”

Choe and Han’s freedom in question

In addition to investigating the financial routes of the player’s salaries, Nicoletti also raised his concern about whether Choe and Han’s human rights are being violated. For most North Korean overseas workers, they are subject to constant surveillance and restrictions on personal liberties.

Adding to this suspicion, the players never made comments or answered questions in the media – a regular occurance for football players. When asked why, some said that it was because the two did not speak Italian. However, they both attended Italian schools and spoke regularly with their coaches and teammates.

In September 2017, Kwang-Song Han was scheduled for an interview on the Italian show Domenica Sportiva. However, just before he was to leave for the event, the government of North Korea ordered a ban on his appearance.

Their coach in Perugia insists that the two are not under any surveillance or control – that they live a normal life without any human rights violations.

‘Aiding and abetting a dangerous regime’

As in many other countries in Europe (Poland) and across Africa, if any portion of the North Korean workers are being taken by the North Korean Regime, Italy would be violating the United Nations sanctions on North Korea.

As US Secretary of State, Rex Tillerson, said this past July, any country hosting North Korean workers was “aiding and abetting a dangerous regime”.

HRWF calls for the Italian government to further investigate the tracking of the salaries. Unless it can be proven with certainty that Pyongyang is not benefitting, the two football players contracts should be dismissed.