TURKEY: Government steps up its defamation on LGBTI+ citizens 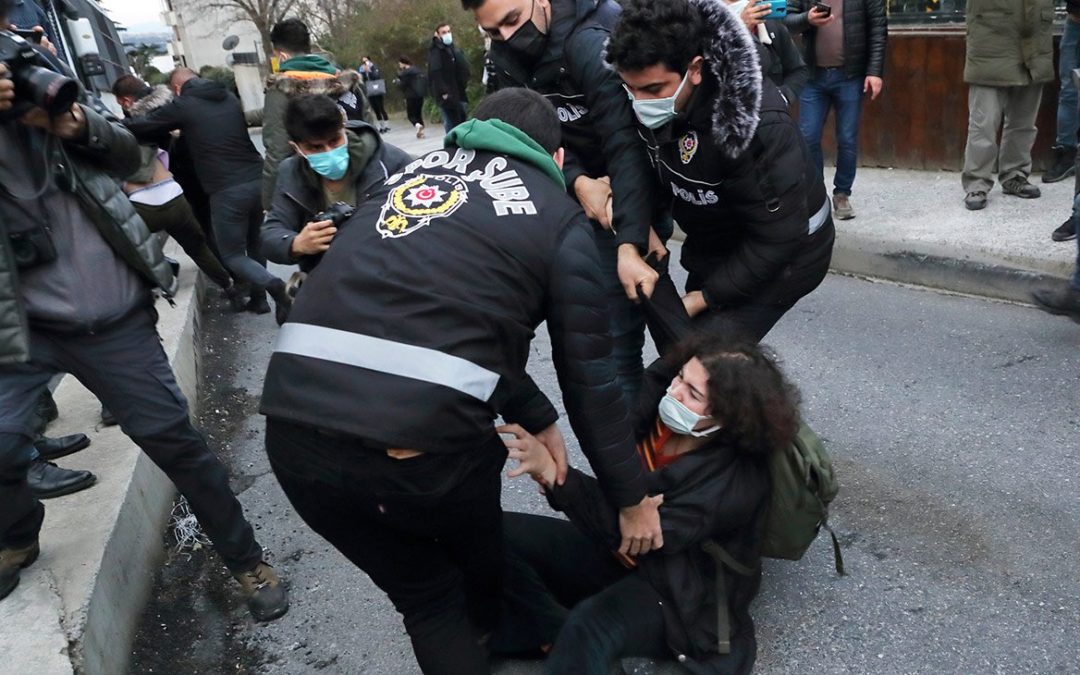 Europe’s leading LGBTI+ rights organisation, ILGA-Europe are alarmed to observe that in the past week the Turkish government has stepped up its systematic attacks on and defamation of LGBTI+ people and calls on President Erdoğan to guarantee the fundamental rights of all minorities without discrimination, as enshrined in the country’s Constitution.

Ilga (05.02.2021) – https://bit.ly/3aFNksF – Over the past week in Turkey, both government and government-supported media have called LGBTI+ people a “disgrace”, “dirty” and “perverts”, which has prompted a wave of hate-speech on social media.

President Recep Tayyip Erdoğan held video conferences on Monday 1 February and Wednesday 3 February denouncing LGBT people and praising his supporters saying: “We will carry our young people to the future, not as the LGBT youth, but as the youth that existed in our nation’s glorious past.”

On February 2, Justice Minister and the Interior Minister Süleyman Soylu called LGBT people “perverts” on Twitter. The social media platform has since flagged the tweet as violating its rules against “hateful conduct”.

This new campaign takes place in the context of rising hateful rhetoric against the LGBTI+ community by representatives of high-level religious and political institutions in Turkey, as well as actions and legislation attacking human rights defenders and civil society organisations.

The step-up in governmental anti-LGBTI+ rhetoric comes as academic staff and students at Boğaziçi University of Istanbul have been protesting the appointment of the University’s new Rector, Melih Bulu, by President Erdoğan on 1 January 2021. Melih Bulu’s appointment is being protested because Bulu is the first appointed rector from outside the University, a move that further extends the government’s crackdown on academic freedom in Turkey.

The new Rector is a long-standing ally of President Erdoğan and his ruling party, and has held different positions in the party for years. He has supported anti-LGBTI+ statements from the Erdoğan government. Professors at Boğaziçi University and students alike are concerned about the future of academic freedom, freedom of expression, freedom of assembly and freedom of association at the University.

In addition to the systematic attacks and bans that Turkey’s LGBTI+ movement has experienced at the hands of Turkish authorities since 2015, in 2020 the government seized upon the COVID-19 crisis as an opportunity to slander LGBTI+ people. In April last year, the President of the Directorate of Religious Affairs, Ali Erbaş targeted LGBTI+ people and people living with HIV, equating homosexuality with a disease, stating that “hundreds of thousands of people a year are exposed to the HIV virus caused by this great haram, which passes as adultery in the Islamic Literature,” and blaming lesbian and gay people for COVID-19. He was quickly supported by leading governmental figures including the Minister of Family, Labour and Social Services, and President Erdoğan himself.

According to Evelyne Paradis, Executive Director of ILGA-Europe: “The Turkish government has an obligation to protect everyone from hate crime and discrimination, and should not be part of any statements that could encourage hate crimes and target any minority group, including LGBTI+ people.

“We recall that as a founding member of the United Nations, Turkey pledged to protect inherent dignity and the equal and inalienable rights of all members of the human family. In addition, as a Member State of the Council of Europe and having ratified the European Convention of Human Rights, Turkey must uphold European human rights law, which prohibits a discriminatory application of human rights.

“We call on Turkey to respect, guarantee, protect and fulfil the fundamental rights of the LGBTI+ community without discrimination as enshrined in its Constitution and equality article therein, and ratified by human rights treaty bodies,” Paradis concluded.