Girls Not Brides (04.04.2017) – http://bit.ly/2pQK7NO – Child marriage can look different from one country to the next. Without context-specific data, it is difficult to design interventions that will effectively tackle the practice.

To better understand why child marriage happens in Tanzania and how best to tackle it, the Ministry of Health, Community Development, Gender, Elderly and Children (MOHCDGEC) there conducted a national survey with the support of several Girls Not Brides members: Children’s Dignity Forum, Plan International and FORWARD. They have released their findings and recommendations. Here is what we learned.

Not all girls are equally affected by child marriage

Some regions have higher rates than others, with Shinyanga and Tabora having rates of up to 59% and 58% while Dar es Salaam and Iringa have rates as low as 19% and 8%. Girls who live in rural areas and/or come from a poor family are also much more likely to be married early. 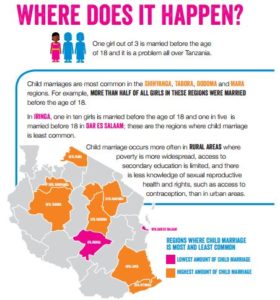 While there are many drivers of child marriage in Tanzania, poverty is by far the biggest factor. Poor families who are unable to pay school feels or take care of their children often resort to marriage, seeing it as a form of economic and social protection. The bride price that parents receive upon marriage – often paid in cattle and cash – is also seen as a strategy to reduce poverty.

…But Gender is always a factor

From a very young age, girls in some regions are raised to perform traditional gender roles as mothers, wives and caregivers. As a result, they often have limited economic value to the household, except the bride price they bring when they marry. Boys, on the other hand are seen as an investment in the family’s future.

Parents worry about the shame, and financial burden, that an unwanted pregnancy brings to the family. In many cases, girls are made to marry the men who got them pregnant, whether they want to or not.

Girls are often tested for pregnancy in schools and expelled if they test positive. Once out of school, they are more likely to be married. There is a real concern that, with the recent increase in teen pregnancies (from 23% in 2010 to 27% in 2016), child marriage rates could rise too.

Girls are not fully protected by the law

Tanzania’s Law of Marriage Act (1971) is different for boys and girls. It allows girls to be married at 15 years old whereas boys have to be 18. Both boys and girls can marry at 14 with a court’s permission. In June 2016, Tanzania’s high court ruled this to be unconstitutional but the law has yet to be amended.

Bribery and corruption are also an issue. There have been various cases of parents bribing government officials who may be likely to report a case of child marriage.

What is needed to end child marriage in Tanzania?