Tajikistan, most Muslim country in Central Asia, struggles to rein in Islam 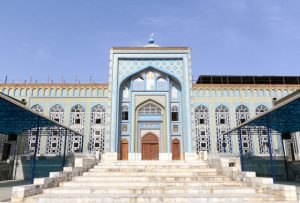 Eurasia Daily Monitor (06.02.2018) – http://bit.ly/2FlDjQm – In the last month alone, local authorities closed almost 100 mosques in the northern part of Tajikistan, the latest effort by Dushanbe to control Islam in the most fervently Muslim country in Central Asia. Yet, this campaign is exceedingly likely to backfire by driving both imams who have lost their jobs as well as their former parishioners and followers to go underground. Indeed, this move may be at least as counterproductive as Dushanbe’s decision two years ago to call home the 6,000 Tajikistani Muslims studying in madrassas (Muslim religious schools) and Islamic universities abroad and then refusing to allow them to work in government-registered mosques. And that entire situation was further exacerbated by the fact that the government has restricted higher Islamic education inside the country to a single Muslim center.

By systematically going after mosques and places of Islamic study, Dushanbe is in large measure recapitulating the unsuccessful Soviet approach, dramatically expanding the Muslim underground in the most Muslim country in Central Asia. As a result, at least some of those Muslim faithful pushed to the shadows could ultimately link up with Islamist radicals coming into the country from Afghanistan, destabilizing the impoverished country still further. If that happens—and there is some evidence that it already is (see below)—the government in Dushanbe and those who want to block the export of Islamist radicalism from Afghanistan are likely to suffer a major defeat and possibly even the overthrow of the secular regime in Tajikistan. In large measure, they will have only themselves to blame for such a loss.

At the end of January, officials in the Tajikistani city of Isfara (Sughd Region) announced that they had closed 45 mosques for failing to maintain “sanitary norms.” Apparently, these former places of worship will be converted into clubs and other social institutions (News.tj, January 25). Then, officials in the neighboring Ghafurov District announced that they were closing 45 mosques supposedly because some of them were built too close together—Tajikistani law bans having two religious facilities within 50 meters of one another—and transforming them into social centers as well (News.tj, January 30).

Officials insist that a sufficient number of mosques will remain open. In the case of the latter closings, the Ghafurov District, which has 360,000 residents, will still have 136 mosques—one for every 2,700 people (Fergananews.com, January 30). The authorities claim there are “about 4,000” officially registered mosques throughout Tajikistan, of which 370 are so-called “cathedral mosques” of significant size. Moreover, according to the government, that there are some 3,914 imams, or one for every 2,210 people in the country, making Tajikistan the most Islamic state in Central Asia by either of these measures (Fergananews.com, November 2, 2017).

But those numbers are deceptive. On the one hand, the government exercises tight control over both mosques and imams. All of the latter are appointed by the government-controlled Council of the Ulema and the State Committee for Religious Affairs. The imams are paid out of government funds, a miserly 800 som ($90) a month. The government also has banned from serving as an imam in official mosques anyone who has received any theological education abroad. This has dramatically limited the number of people in the country who can serve—there is only one Muslim academy in all of Tajikistan, and it is small. It has also diminished the quality of those serving—many Tajikistani imams do not know Arabic or even basic prayers. Furthermore, the government decides on the subjects of the homilies of the imams and regularly distributes to them a special brochure of “recommended” texts. Finally, the country’s security services have set up video surveillance within and around all mosques in the capitals and major cities and many of the mosques in smaller towns as well (Fergananews.com, January 30). It would seem that the authorities have things under control as much as possible.

But on the other hand, there is an alternative Islam, one that in Soviet times Western scholars like Alexandre Bennigsen called “unofficial” or “underground” Islam. It consists of all Islamic practice that the government does not allow. And as Bennigsen showed, the more tightly the Soviet authorities restricted what “official” mosques and imams could do, the larger and more vital became this second face of Islam (Alexandre Bennigsen, Islam in the Soviet Union, London, 1967; Bennigsen, Islamic Threat to the Soviet State, London, 1983).

The reasons for evoking that legacy when discussing present-day Tajikistan are numerous: First, Tajikistan in the 1990s suffered a bitter civil war in which an Islamic party played a major role. That party has now been banned (see EDM, September 11, 2015); but its supporters remain not only in the population but among the military and the civilian bureaucracy (RFE/RL, December 1, 2015). The large number of Tajiks who identify as imams but who cannot work in official mosques because they received their training abroad or because, as now, their mosques have been closed are ready, willing and able to lead those who also do not feel comfortable in the denatured Islam that Dushanbe permits (Emmanuel Karagiannis, “The Challenge of Radical Islam in Tajikistan,” Nationalities Papers, 34:1, 2006, pp. 1–20.). And the Tajiks of northern Afghanistan, many of whom are Islamists, have made inroads in Tajikistan in recent months as have Tajik Islamic State fighters now returning home (Asia Times, February 4, 2018).

Many in Moscow and the West have praised Dushanbe for its moves to control Islamist radicalism. But they have generally failed to understand that by its actions against Islam, the Tajikistani government is radicalizing far more of its citizens than it is reining in.