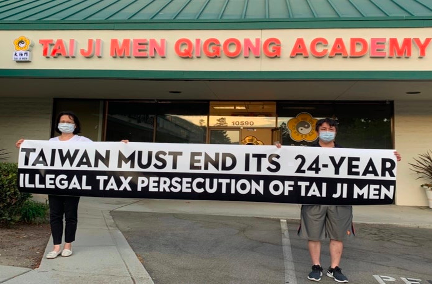 HRWF (26.11.2020) – 24 years ago, Prosecutor Kuan-jen Hou commanded hundreds of armed policemen to raid and search 19 properties, including the facilities of Tai Ji Men (TJM) and its disciples’ residences in different parts of Taiwan. He was accompanied by journalists, press photographers and media cameramen on this operation. This was going to be the beginning of an over 20-year warfare between an anti-TJM prosecutor and Dr Hong Tao-tze, the founder and spiritual leader of the movement. Dr Hong was arrested and spent 159 days in detention. After trials spanning over 10 years, he was declared not-guilty by the Supreme Court on a number of unfounded charges. The court has ruled that Dr. Hong was not guilty of fraud, tax evasion, or violation of tax codes, and confirmed that “since the red envelopes offered by the dizi (similar to students) to the shifu (master) were gifts, they were tax-free income under Article 4, Subparagraph 17 of the Income Tax Act” and that “items such as the uniforms for practicing qigong, which were collectively procured by certain Tai Ji Men dizi out of the needs of the dizi, were not sold for profits” and hence no tax issue. A number of his disciples were also arrested and declared not-guilty after years of judicial procedures but they, along with their beloved, were mocked, ostracized and discriminated against. Human Rights Without Frontiers collected their testimonials.

Tiao-hsin Chen, a Tai Ji Men disciple, was a chief financial officer at ACER before retiring. He joined Tai Ji Men after being diagnosed with an incurable condition and began volunteering at the academy.

When the crackdown happened on the afternoon of 19 December 1996, Tiao-hsin Chen voluntarily went with Dr Hong to the Taipei Field Office of the Bureau of Investigation. Despite having committed no crime, Tiao-hsin Chen was held and interrogated continuously for the next 24 hours. During that time, he was handcuffed, and the officers refused to give him food or allow him to sleep. The next day, he was transferred to the Taipei District Prosecutors Office and was then interrogated by Prosecutor Kuan-jen Hou. Hou tried to coerce him into testifying against Dr Hong using intimidation and threats. Tiao-hsin Chen refused, and was not released until 8:00 pm on 20 December.

On 24 December 1996, authorities searched Tiao-hsin Chen’s house and then brought him to the Taipei Field Office of the Bureau of Investigation, where he was again interrogated under inhumane conditions. Afterwards, he was detained and held incommunicado for close to four months. Tiao-hsin Chen was arraigned by Prosecutor Hou on 7 and 16 January 1997 but his lawyer was not notified of either date.

On 1 January 1997, Prosecutor Kuan-jen Hou threatened to have Tiao-hsin Chen’s wife’s income reduced and as a result, no one would be available to take care of his two daughters, who were still in school if he didn’t provide testimony against Dr Hong. During the arraignment on 16 January, his wife was being held in another holding cell and Prosecutor Kuan-jen Hou threatened to detain her. Since Tiao-hsin Chen still refused to falsely testify against Dr Hong, he was held incommunicado for a total of four months.

While Tiao-hsin Chen was detained, the prosecution leaked false information to the media such as reports implying that Ministry of Justice officials were involved. His wife worked as an editor in the Ministry of Justice and so, regrettably, she was forced into early retirement. Their two daughters were studying at university at the time and were ridiculed and discriminated against due to this case. Their grades and wellbeing suffered. Later, it led to them choosing to move abroad for study and work.

Additionally, despite working as the chief financial officer of a well-known company and being quite reputable in his field of work and having always had good credit with banking institutions, this period of detention and the highly public nature of Tiao-hsin Chen’s trial ruined his reputation. This negatively impacted his mortgage agreement with his bank. He and his wife were forced to beg friends and family for financial assistance, but many were suspicious of them due to the negative media reports and were reluctant to give them a helping hand. They had no choice but to sell their only house to repay the mortgage. The achievements that Tiao-Hsin Chen had worked so hard throughout his entire career to accomplish and his reputation were all destroyed because of this human rights violation case.

Eventually Tiao-hsin Chen received state compensation for wrongful imprisonment, but the damage done to him and his family was immeasurable.

Wan-ding Chang, a Tai Ji Men disciple, served in the military until 1976. After discharge, he began working for the largest publishing house in Taiwan and eventually became promoted to the position of assistant vice president and supervised over 500 employees.

In 1989, he joined Tai Ji Men. When the crackdown happened on 19 December 1996, he was one of Dr Hong’s disciples brought in for questioning. Then, on 24 December 1996, he was taken to the Taipei Investigation Bureau for interrogation by three investigators of that Bureau. They had first searched his house without a warrant. During both interrogations, he was threatened, intimidated, and coerced in attempts to force him to provide testimonies against Dr Hong.

During his interrogation, the officers called his employer. This destroyed his credibility and led to a forced resignation. As the sole earner with a salary of NT$200,000 (around US$7,000) per month, his family faced a financial crisis after he lost his job. Furthermore, it was challenging for him to find other work due to the negative public attention circulating this case.

At the time, Wan-ding Chang’s three daughters were all in school. They were mocked by their classmates, especially when the accusation that Tai Ji Men’s leader was ‘raising goblins’ came out. Wan-ding Chang was also ridiculed by friends, relatives and neighbours.

Later, Prosecutor Kuan-jen Hou began another case against 12 Tai Ji Men dizi, where Wan-ding Chang was identified as one of the defendants. Since there was no concrete evidence for the charges, Prosecutor Hou took advantage of a situation, where a group of self-proclaimed victims had brought a private prosecution against these defendants, and transferred his case to the private prosecution. The defendants were then subjected to a series of lengthy court appearances and hearings. This was very costly for the defendants, as it took immense resources in the form of time and money, as well as causing irreparable damage to their reputations.

After the case had gone on for four years, the court finally acquitted the defendants.