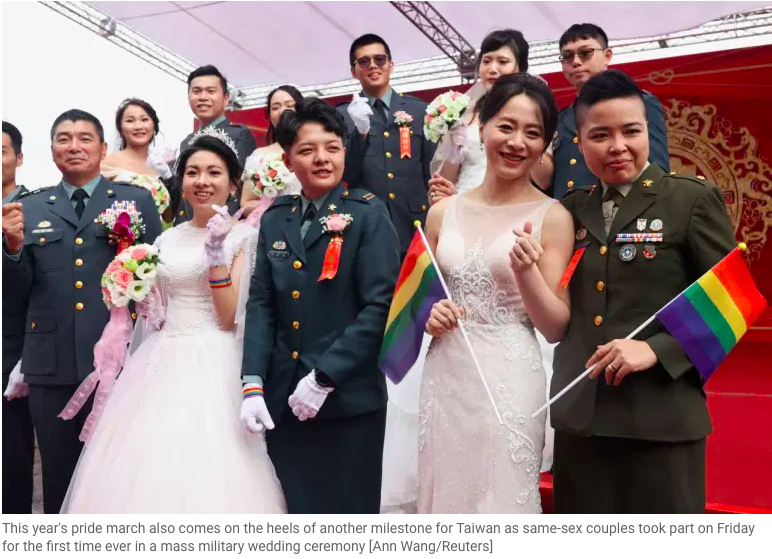 While Taiwan’s borders remains closed to most foreigners, organisers still expect to attract more than 100,000 people to the gay pride event.

Al Jazeera (31.10.2020) – https://bit.ly/3250QCi – With a backdrop of uncharacteristically sunny skies and cool autumn air, thousands walked through Taiwan’s capital for the Taipei Pride on Saturday afternoon in the largest event of its kind in Asia this year which has seen drastic COVID-19 lockdowns in some parts.

Some were dressed in Halloween costumes, others in drag or street clothes. There were rainbow emblems everywhere.

Life has remained relatively normal in Taiwan since the late spring as the island this week marked 200 days without a local transmission of COVID-19, although borders remain closed to most foreigners and precautions remain on public transit.

Last year’s Taipei Pride parade drew 200,000 participants from all over the world just several months after Taiwan became the first in Asia to legalise same-sex marriage.

“In past years, a lot of tourists come from abroad, usually from 20 to 30 countries. This week because of the lockdown of the border, we expect there will be fewer foreigners, but we also expect people from other cities in Taiwan may come to Taipei to join the parade,” said Shao Li-Yi, chairperson of Pride organiser Taiwan Rainbow Civil Action Association (TWRCAA).

Shao predicted between 100,000 and 130,000 participants on Saturday although numbers were still uncertain.

While most Pride events around the world are held in June to coincide with the anniversary of New York’s Stonewall riots – a crucial turning point in LGBTQ history – Taipei typically holds the event in October to avoid the steamy summer heat and heavy rains.

SueAnn Shiah, a Taiwanese-American filmmaker and artist who identifies as queer, said she was excited about Taiwan getting a global boost for Pride and celebrating how the island has successfully contained the coronavirus.

“I’m really glad Taiwan gets to be celebrated in the world arena where Taiwan is usually ignored. This is one thing we can be proud about. Before COVID-19, Taiwan was number one in Asia [for legalising same-sex marriage] and now Taiwan is number 1 in handing COVID-19,” said Shiah.

This year’s event also comes on the heels of another milestone for Taiwan as same-sex couples took part on Friday for the first time ever in a mass military wedding ceremony.

But while Taiwan is often depicted as one of the most LGBTQ-friendly countries in Asia, activists say there are still many uphill battles from the community.

While same-sex couples are allowed to marry, the rules are less clear for couples with a foreign partner. They are also not allowed to adopt children as a couple and surrogacy remain illegal. Trans-rights are also still in their infancy.

Public attitudes towards same-sex couples are generally more accepting than other parts of Asia, thanks in part to the fact homosexuality was never illegal, but that is in part because attitudes towards gender norms vary from those in the West, said Shiah.

“Here in Taiwan you see women holding hands all the time, they could be couples or they could be straight because of different cultural norms,” said Shiah.

“I often see two boys on the same bicycle one on the back, and in the US people would think that was ‘gay.’ Here, that’s not the connotation because of a different understanding of masculinity and gender norms.”

In some corners, however, conservative views persist.

President Tsai Ing-wen, an unmarried woman in her mid-60s, has come under attack at home and abroad over her sexual orientation, although it was not uncommon for women of her generation who entered politics to not marry.

Conservative Christian denominations from the West, whose adherents can receive special missionary visas, have also influenced public views towards same-sex issues. In the lead up to the legalisation of same-sex marriage in May 2019, these groups were cited as a key reason marriage equality failed in a national referendum.

This week organisers of a National Prayer Breakfast in Taiwan also cancelled their event after Tsai posted support for Taipei Pride on here Facebook page.