PAKISTAN: Acts of violence against Hindu and Christian minorities

Pakistan murders Hindus yet again: 21 houses with children inside set on fire

Jammu Kashmir Now – (11.05.2020) https://bit.ly/3fQ5GJh – In an act of utter inhumanity, Pakistan continuing its atrocities on Hindus burnt down 21 houses belonging to Hindus in Sindh of Pakistan. Hindus including children were beaten up and forced to leave their homes, those who were still inside their burning houses are reportedly critical. In another village, the local goons of Pakistan attacked a poor Hindu family and sexually assaulted a woman from the family forcing them to leave their locality.

Pakistan, eager to wipe out Hindu minorities from its country is leaving no stone unturned in torturing Hindus attacking their houses, their women and children.

In a recent barbaric move, about 21 houses of Hindus were set up on fire in villages Tadados, Tharparker, Hala, and Matiari of Sindh province in Pakistan. 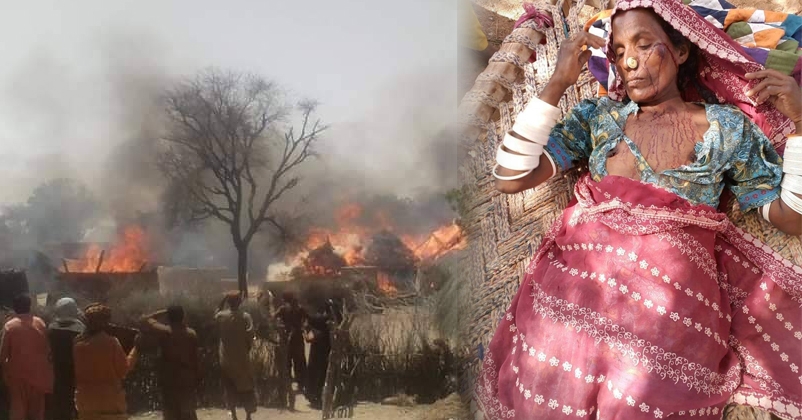 In another attack, a non-Muslim woman was sexually assaulted before her family who too was attacked and forced to leave from their houses. The poor Hindu family was attacked by none other than their Muslim neighbors in Punjab region of Pakistan. The family though survived serious injuries but was utterly humiliated and then pushed to leave the locality.

Hindus are not only being targeted in various villages of Pakistan but are also suffering more due to the COVID-19 outbreak and of being denied of any government aid. The inhumane people are not even sparing the children or the aged people from the Hindu community.

Even though the Hindu minorities have been living in Sindh province of Pakistan from countless years, but they are being continuously attacked and tortured by the Muslim lot of Pakistan along with its government. Although Muslims initially took shelter as refugees in those areas but later invaded the areas to attain full occupancy across the regions.

Pakistan Minorities Teachers’ Association (11.05.2020) – https://bit.ly/2YTEDGF – A Church was desecrated by a group planning to grab land belonging to a minuscule Christian community. The attack took place on May 9th 2020 at Hakimpura, Tehseel Ferozewala of District Sheikhupura of Pakistan’s Punjab.

Aun Abbas and Ali Dhan, s/o Malik Niaz, are said to be the brains behind the attack and have been eyeing this property for the past 22 years. According to the Pak Christian community, these individuals organized a group of 5-6 other unknown perpetrators with the ill-intention of grabbing this land.

Due to the lockdown to prevent the spread of COVID 19, the Church was shut down, and so the accused group used the absence of congregations to launch an attack.

There is widespread anger within the community due to this latest desecration in Pakistan.

Police, with a view to silence the community, arrested two accomplices, but refrained from pursuing the main accused.

Due to the continuous persecution of minorities in Pakistan, many have been forced to take shelter in India. This has prompted the Indian government to initiate a controversial Citizenship law that aims to provide Citizenship to persecuted minorities like Hindus, Sikhs, Christians and Buddhists of troubled states like Pakistan, Bangladesh, and Afghanistan.