The Hill (22.09.2020) – https://bit.ly/33Vzb6Z – The House on Tuesday overwhelmingly passed legislation aimed at tamping down the exchange of goods made in forced labor camps by Uighur Muslims in China’s Xinjiang region.

The  Uyghur Forced Labor Prevention Act — introduced by Rep. Jim McGovern (D-Mass.) and passed in a 406-3 vote — would “prevent certain imports from Xinjiang and imposing sanctions on those responsible for human rights violations” from the region.”

Lawmakers on both sides of the aisle have stressed the need for the U.S. to take action to combat the human rights abuses in China.

“It is time for Congress to act. Over the past several years we have watched in horror as the Chinese government first created and then expanded a system of mass internment camps,” McGovern said on the floor ahead of the vote.

“As many as 1.8 million Uighurs and members of other predominantly Muslim ethnic minority groups have been arbitrarily detained in the camps and subjected to forced labor, torture, political intimidation, and other severe human rights abuses.”

Rep. Michael McCaul (R-Texas) likened the abuses to what was seen in concentration camps in Nazi Germany.

“In July. U.S. Customs and Border Protection seized a 13-ton shipment of human hair. Madam Speaker, human hair that originated in the forced labor system,” he said on the floor.

“We haven’t heard about human hair since the nazis in the concentration camps of the war that my father fought in, World War II. It’s brazen and sickening. We must refuse to be complicit financially or otherwise. And the CCPs crimes against the Uighurs, the Muslim Uighurs, for that reason I support this bill before us today.”

The House is also slated to pass legislation that would require publicly traded companies in the United States that do business within the region to disclose information on their supply chains and whether their products are made by forced labor.

While China tries to defend the indefensible claiming that the transformation through education camps are benign “schools,” one of our reporters secretly visited the new large camp in Yining, Xinjiang, and proved it is undoubtedly a jail. 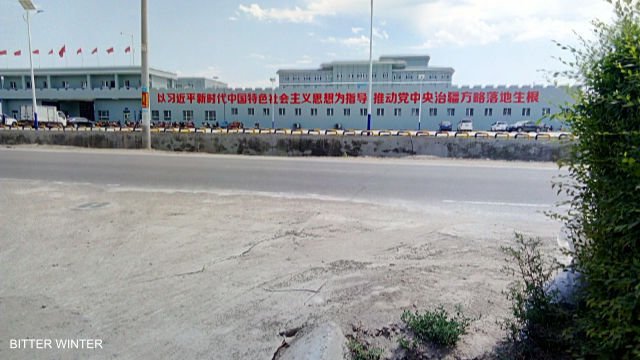 Exterior view of the re-education camp in Huocheng county

On November 6, the United Nations Human Rights Council conducted its Universal Periodic Review of China. Several countries denounced the transformation through education camps, particularly those for Uyghurs in Xinjiang, as places where the inmates are subjected to psychological pressure, inhumane treatments, and torture. China answered that they are simply “educational” facilities. Bitter Winter has repeatedly documented that this is not the case, and is now in a position to offer unpublished news, images, and footages. 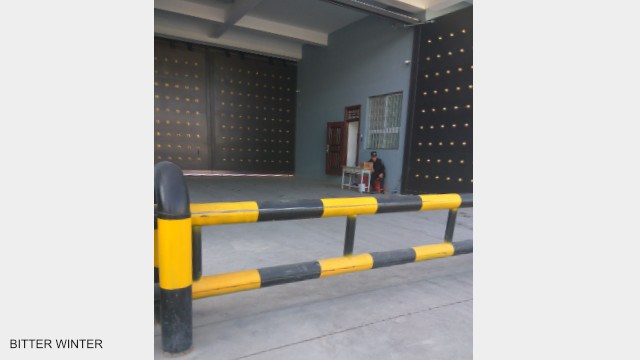 Vehicles entering the re-education camp must pass through two gates 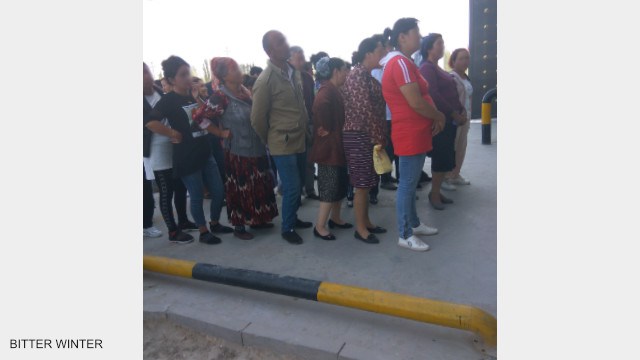 The detainees’ family members who are attending the public trial meeting line up outside the re-education camp, waiting to be summoned.

In May of this year, authorities in Xinjiang began to build a large-scale “transformation through education” camp in place of a lumber mill and a free market for buying and selling cattle and sheep, in the city of Yining, Huocheng county. In three months, the construction of this camp was basically completed, covering an area of about 100,000 square meters. 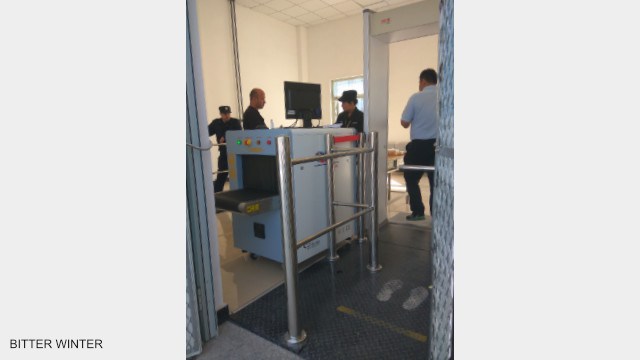 In August, the construction of this camp was in its final stages. When conducting a secret visit inside the camp, one of our reporters discovered that there are altogether nine buildings, where “students,” are detained, surrounded by barbed-wire fences. Each building is four floors high, and each floor has 27 rooms (dormitories) and three “classrooms.” All the dormitories and “classrooms” are fitted with double iron doors, and iron bars have been installed on all the windows. The facility’s structure is obviously very much similar to that of a prison. 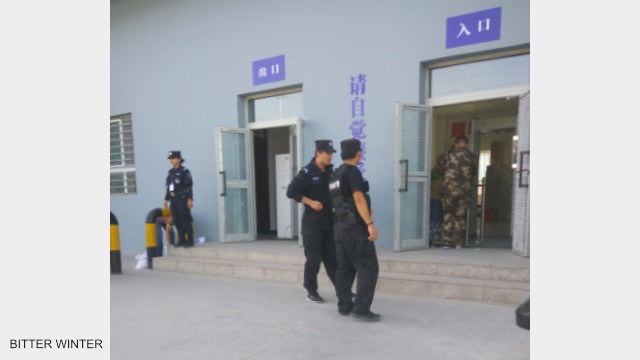 Police patrol and stand guard outside the re-education camp.

A construction worker revealed that most people who would be locked up there, in fact, received prison sentences; some of them were sentenced to five or six years. He also emphasized that the camp was really tantamount to a prison, with little hope for the inmates to be let out or escape. 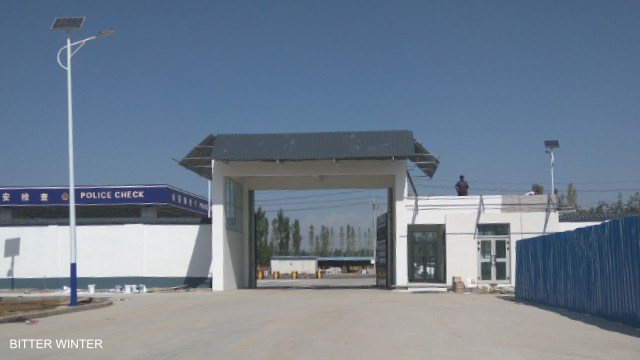 A large-scale production base has been built adjacent to the re-education camp.

In September, Uyghurs were already being locked up one after the other in the camp. On September 7, the authorities held a public trial of the detainees there. The camp is now heavily-guarded, with 15 high-definition cameras near the entrance alone. There are also armed police officers guarding the entrance. Vehicles entering the camp must pass through two gateways, and can only enter after passing a security check. 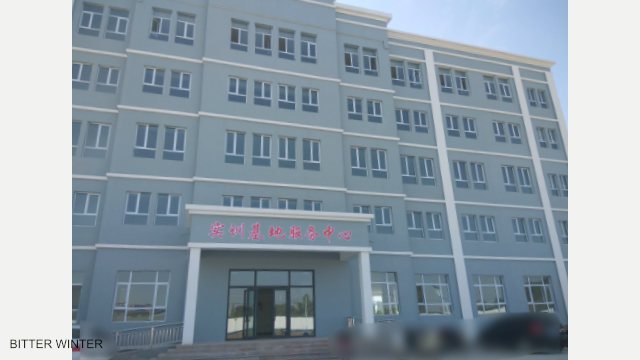 Inside the base, there is a building named “Practical Training Base Service Center.”

Besides, adjacent to the camp, there is also a large production base that contains nine factories, including a clothing factory, an electronics factory, and a food processing plant. One of the factory managers confirmed that the “students” detained in the camp are sent there for forced work, something Bitter Winter has repeatedly documented in similar cases. Not only are the transformation through education camps jails, but inmates are also subject to forced labor. 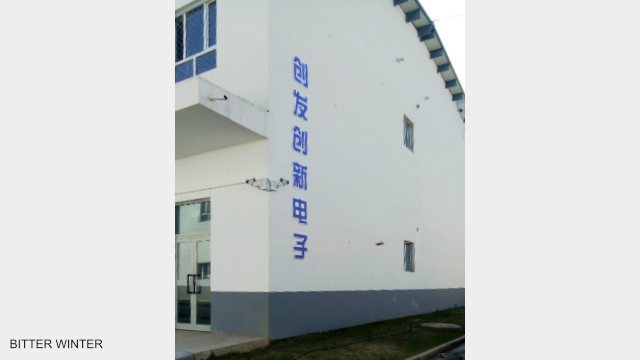 “Chuangfa Innovative Electronics” is written on the wall of one of the factories. 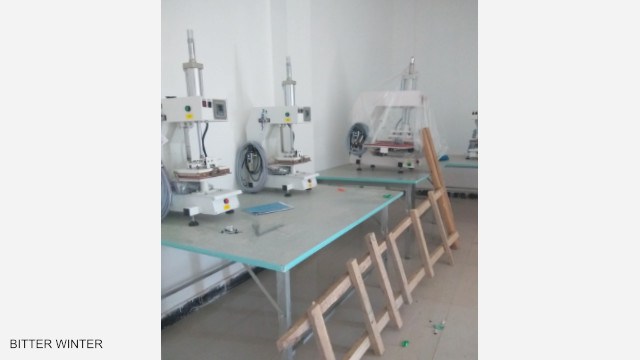 Machines and equipment have already been installed in the factory. 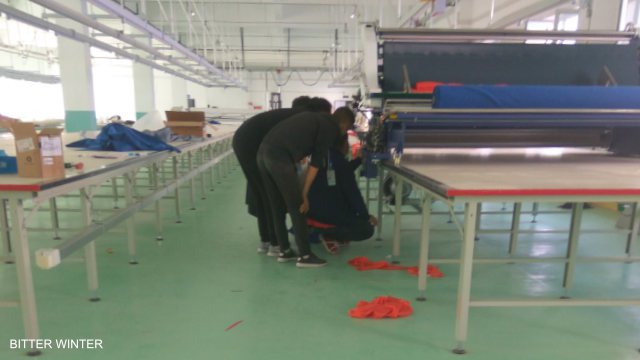 Workers adjust and test machines in a factory.