Jews are at risk in Germany, says Jewish council

DW (26.05.2019) – https://bit.ly/2QtioBa – Josef Schuster, the head of the Central Council of Jews in Germany, told the Welt am Sonntag newspaper that the security situation for Jews in the country has worsened in the past few years.

“On the whole I don’t tend to dramatize, but the situation has by and large really deteriorated,” Schuster said on Sunday.

“It has been the case for a while now that Jews are at risk in some major cities if recognizable as Jews,” he added.

Schuster was weighing in on a debate triggered by Berlin’s anti-Semitism commissioner’s warning that the Jewish community in Germany should avoid donning yarmulkes, the traditional Jewish head coverings for males, in some public spaces.

“I cannot advise Jews to wear the kippah everywhere all the time in Germany,” Felix Klein said in an interview carried by the Funke media group on Saturday, using another word for yarmulke. The German official said he had “changed his mind (on the subject) compared to previously.”

“It is to be welcomed if this situation receives more attention at the highest political level,” Schuster said of Klein’s warning.

Last year, a man wearing the Star of David was beaten down and kicked right in the center of Berlin. Some weeks earlier, a similar incident in Germany’s capital caused public outrage and sparked a nationwide debate on anti-Semitism when a 19-year-old Syrian attacked an Arab-Israeli and his companion with a belt in broad daylight. Both victims wore yarmulkes in what was an allegedly anti-Semitic attack.

Clarifying his comments, Klein said that he wanted to start a debate about the safety of Jews in Germany.

“I deliberately wanted to initiate a debate on the security of the Jewish community in our country,” he said. “Of course there be cannot be no-go areas for Jews or members of other minorities anywhere in Germany.”

Analysts say the rise of far-right political groups in Germany has also contributed to anti-Semitism in the country. Parties like Alternative for Germany (AfD) openly question Germany’s culture of atonement for World War II. Some experts also attribute the new wave of anti-Semitism to the arrival of millions of asylum-seekers, mainly from Muslim-majority countries such as Syria, Afghanistan and Iraq.

Klein said Saturday that “the lifting of inhibitions and the uncouthness which is on the rise in society” are factors behind the recent anti-Semitic wave.

“The internet and social media have largely contributed to this — but so have constant attacks against our culture of remembrance,” he added.

A ‘capitulation to anti-Semitism’

“The statement of the German government’s anti-Semitism commissioner … shocked me deeply,” Rivlin wrote on Twitter.

“We acknowledge and appreciate the moral position of the government of Germany and its commitment to the Jewish community that lives there,” Rivlin said, “but fears about the security of German Jews are a capitulation to anti-Semitism and an admittance that, again, Jews are not safe on German soil.”

On Saturday, Germany’s Justice Minister Katarina Barley told the Handelsblatt newspaper the surge in anti-Semitic attacks was “shameful for our country” but added that the police were “vigilant.”

FRANCE: Official statistics about the protection and surveillance of places of worship

HRWF (20.02.2017) – According to the annual report of the French Ministry of the Interior published on 1st February, the number of racist, anti-Muslim and anti-Jewish incidents largely decreased last year while the number of anti-Christian incidents dramatically increased over the same period.

After a record number of reported incidents in 2015 (2,034 incidents), racist, anti-Semitic and anti-Muslim incidents decreased in 2016 with 1,125 reported incidents (-44.7%). These statistics are reflective of incidents (acts of violence, arsons, degradations…) and threats (insults, hate speech…) about which complaints were filed.

In 2016, incidents targeting Jewish and Muslim community buildings respectively decreased by 54% and 37.5% in comparison with 2015 while there was an increase of 17.6% concerning Christian (Catholic) places of worship.

A closer look at the statistics indicates that:

According to the statistics of the Interior Ministry, 4,320 places of worship and religious community buildings were under surveillance of mobile (non-static) patrols of law enforcement forces and soldiers:

According to the website of the Observatoire de la Christianophobie, twenty-two anti-Catholic incidents were recorded in France in January 2017.

Incidents targeting churches, chapels and other Catholic places of worship:

Some recent incidents in the first two weeks of February 2017:

As he reported on his page in a social network, the basis is subpoint 1 of point 1 of article 7 of the law “On the legal status of foreign citizens in Russia” (advocacy for violent change in the foundations of the constitutional structure of Russia or creation by other actions of threats to the security of the RF or its citizens).

“That is, by our actions we are creating a threat to the security of the Russian federation. This is a difficult trial from above. But I trust the Almighty and I am sure that, with God’s help, everything will be fine,” the rabbi wrote.

He did not explain what he is specifically charged with and what it is for.

In his turn, the head of the Department of Public Relation of the Federation of Jewish Communities of Russia [FEOR], Borukh Gorin, commenting on the situation, declared that in his 16 years of residence in Sochi, Edelkopf has been interested in only one thing—to make it possible for Sochi Jews “to live a full-fledged Jewish life,” and when the Olympiad was held in Sochi in 2014 “hundreds of Jews—athletes and tourists—were able to pray and get kosher food thanks to the Jewish community.”

“The accusation of Rabbi Edelkopf, like the recent accusation of the rabbi of the Moscow congregation of Among One’s Own, Joseph Khersonsky, of violation of migration legislation obviously has one common basis—the desire of overly zealous officials to get new ‘stars’ for displaying vigor in removing alleged ‘violations of law’ taking place,” Gorin noted, who was quoted by the press service of FEOR on Monday.

After emphasizing that such decisions “disorient the Jewish community and evoke serious concern for the future of Jewish congregations in the country,” he expressed the hope that, just as in the case of Khersonsky, “this misunderstanding will be cleared up.”

In turn, members of the Sochi Jewish community consider the deportation of Edelkopf and his family from Russia to be illegal.

“Members of the Jewish community . . . of the city of Sochi ask President Putin to render personal assistance and annul the decision of the police of Kuban cancelling the permission for temporary residence, given earlier to the rabbi and his family and also to provide the possibility for Edelkopf to continue his work,” the chairman of the Sochi Jewish congregation, David Kosnevich told the Interfax news agency on Monday.

In 2003, a rabbi from Rostov-on-Don, Eliashiv Kaplun, and Rabbi Chaim Friedman, were deported from Russia. In 2009, the rabbi of the Primore territory, Isroel Zilbershtein, and rabbi of Stavropol territory, Tsvi Khershkvich; and in 2013, the rector of the International Jewish Institute of Economics, Finance, and Law, Rabbi Alexander Feigin; and in 2014, Rabbi of Tula, Zeev Wagner; and an attempt was made to deport Omsk Rabbi Osher Krichevsky. On 27 January 2017, the rabbi of the Moscow Among One’s Own congregation, J. Khersonsky, was arrested on a charge of violating the migration legislation. However a trial conducted on 30 January removed all accusations from him. (tr. by PDS, posted 6 February 2017)

FRANCE: Anti-Christian incidents on the rise but sharp fall for anti-Muslim and anti-Jewish incidents

HRWF (03.02.2017) – According to the annual report of the French Ministry of the Interior published on 1st February, the number of racist, anti-Muslim and anti-Jewish incidents largely decreased last year while the number of anti-Christian incidents dramatically increased over the same period.

After a record number in 2015 (2034 incidents), racist, anti-Semitic and anti-Muslim incidents clearly decreased in 2016 with 1125 incidents (-44.7%). These statistics are reflective of incidents (acts of violence, arsons, degradations…) and threats (insults, hate speech…) about which complaints were filed.

At the same time, the Collectif contre l’Islamophobie en France (CCIF) and the Observatoire National contre l’Islamophobie (ONCI) have published their own report, which confirms the trend measured by the Ministry of the Interior, but also notes that this has not impacted the level of tolerance towards Muslims.

According to the CCIF, anti-Muslim incidents diminished by 35.9% in 2016 in comparison with 2015 and by 24.1% against 2014. Under the heading “discrimination” (419 cases), the CCIF also includes acts of vandalism (25), assaults (39) and hate speech (98). Most recorded discrimination incidents are committed in public services (64%). These internal statistics are related to the number of cases directly referred to the CCIF.

The general decrease in anti-Muslim incidents is said to be due to several factors: bigger social empathy and solidarity towards Muslims, policies against Islamophobia as well as securing mosques and prayer places by law enforcement forces (initiatives supported by 341,000 EUR in 2016 and 756,000 EUR in 2015). The strategy of ISIS terrorist attacks aiming at dividing France’s civil society and fueling anti-Muslim sentiments has obviously failed.

According to French interior ministry figures, there were 57.6 percent fewer anti-Semitic incidents in 2016 compared with the previous year.

The French government sees this drop as “the fruit of government initiatives”, in particular a €100 million campaign to “fight racism, anti-Semitism and all forms of discrimination linked or originating from religion”.

According to the January 22 report compiled by the Israeli ministry for diaspora affairs, the number of anti-Semitic attacks in France dropped, by 63.6 percent, between 2015 and 2016. Much of the credit for this drop is due to the French government, which in 2015 launched an anti-racism initiative involving hundreds of posted police officers and soldiers patrolling near Jewish schools and synagogues, said the Israeli ministry.

According to the Ministry of the Interior, 949 anti-Christian incidents – 399 acts of vandalism and 191 cases of theft of worship items – were recorded on the French territory in 2016 but this does not include the hacking of Catholic websites which were said to number 112 by the French Observatory of Christianophobia. Some comparative statistics:

The Ministry of the Interior notes that there was a satanist motivation behind 14 incidents and in 25 cases there was an anarchist connotation.

In France, there are about 45,000 church buildings, 2500 mosques and 500 synagogues. According to the Ministry of the Interior, 2400 Christian places of worship, 1090 Muslim buildings and 817 Jewish sites (synagogues, schools and community centers) are protected by law enforcement forces. In the last two years, an interministerial fund for the prevention of delinquency has granted 12.5 million EUR to provide the most sensitive religious sites with security and video-protection material. 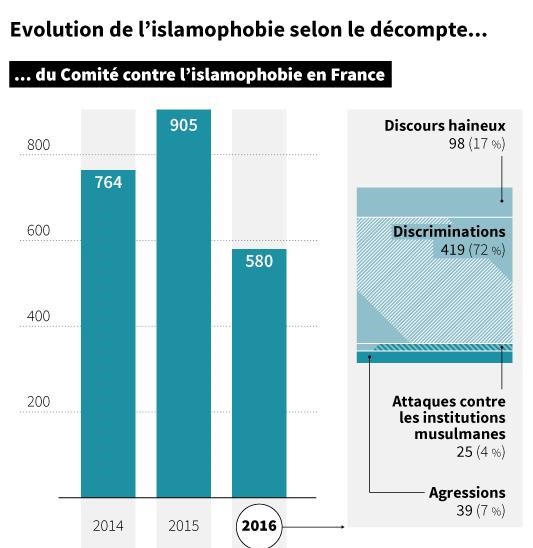 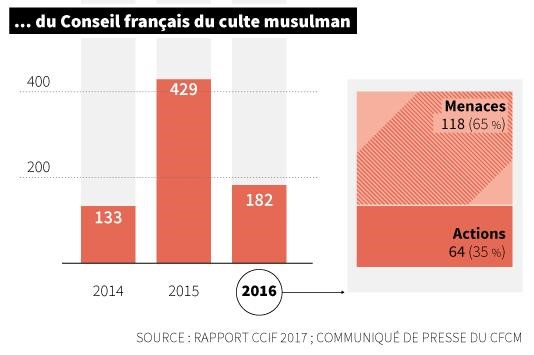