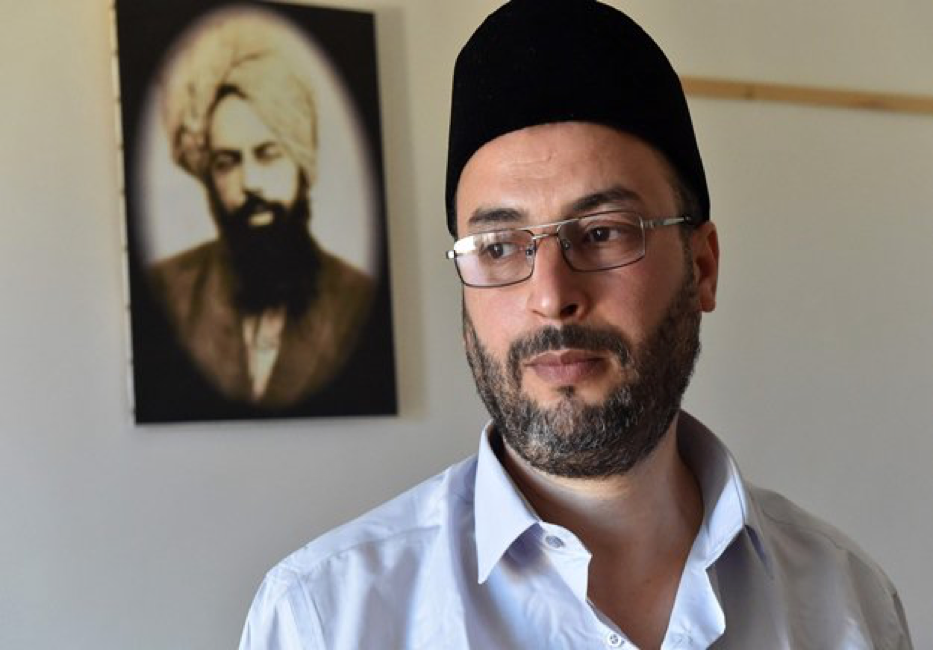 AFP (14.09.2017) – http://bit.ly/2x0CqM2 – An Algerian court on Wednesday found the head of the country’s tiny Ahmadiyya community guilty of ‘offending Islam’ and handed him a six-month suspended sentence, his lawyer said.

“Mohamed Fali was handed a six-month suspended sentence. He was found guilty of unauthorised fundraising and offending the Prophet (PBUH) and Islam,” Salah Dabouz said.

Ahmadis are accused of heresy and since last year Algerian authorities have cracked down on them.

The trial in the western coastal town of Mostaganem came after Fali objected to a suspended sentence of three months on the same charges in February at a trial he did not attend.

Algerian law allows defendants to attend a retrial if they were not present for the first trial.

Fali was arrested from his home in Ain Sefra, 650 kilometres southwest of Algiers, on August 28.

“My client will be released, but I’m shocked he was sentenced in a case where there are no facts,” his lawyer said. Fali faces cases in several courts.

At least 286 of Algeria’s roughly 2,000 Ahmadis have been arrested and tried since the start of a government crackdown last year.

All were handed jail terms, ranging from a three-month suspended sentence to four years, except three who received fines.

Islam is the state religion in Algeria, where Sunni Muslims make up the majority.

Freedom of religion is guaranteed by law, but preachers and places of worship must be licensed by the government.

The Ahmadis have never applied, believing they would face certain rejection.

The Organisation of Islamic Cooperation — of which Algeria is a member — declared in 1973 that the Ahmadiyya community was not linked to Islam.

HRWF (30.06.2017) – On 28 June, six Ahmaddis were sentenced by the court of appeals of Batna (430 km from Alger) for “unauthorized fundraising, activity in an unauthorized association and distribution of documents against national interests” . Five of them were sentenced to one year in prison while the sixth one got a suspended sentence of six months. This is the heaviest sentences imposed on Ahmaddis in Algeria. In the first instance, they had been sentenced to 2-4 years in prison and a fine of 300 000 Algerian dinars (2 400 euros).

Waves of arrests and prosecutions of Ahmaddis

Amnesty International (19.07.2017) – http://bit.ly/2stbQFe – Algeria must halt its clampdown against members of the minority Ahmadiyya religious movement, said Amnesty International today, ahead of the appeal hearing on 21 June of six Ahmadis sentenced to up to four years in prison for charges relating to the exercise of their religion.

At least 280 Ahmadi men and women have faced investigation or prosecution over the past year, since a wave of arrests began after failed attempts to register an Ahmadi association and inaugurate a new mosque in 2016.

“The clampdown against Ahmadis over the past year is alarming. This wave of arrests and prosecutions of Ahmadis is a clear indication that the authorities are stepping up restrictions on religious freedom in the country,” said Heba Morayef, North Africa Research Director for Amnesty International.

“Algerian authorities should ensure that the cases against Ahmadis which are solely related to the peaceful practice of their religion are dropped, and immediately release those detained.”

There are an estimated 2,000 Ahmadis in Algeria. Ahmadis consider themselves to be Muslim, however, Algerian officials have made public statements calling them heretics and a threat to Algeria.

In March 2016, Algerian authorities refused an attempt by Ahmadis to register as an association under Algerian law. On 2 June 2016 the police raided a newly-built Ahmadi mosque in Larbaa, in the province of Blida, on the morning of its planned inauguration, and shut it down.

Since then, Amnesty International has learned from local sources that Algerian authorities have initiated judicial proceedings against more than 280 Ahmadis. The charges they face include membership in an unauthorized association, collecting donations without a licence, practising worship in unauthorized places, disseminating foreign propaganda harmful to national interest and “denigrating” the “dogma” and precepts of Islam.

According to members of the Ahmadi community and three lawyers interviewed by Amnesty International, as well as legal documents reviewed by the organization, over a third of those facing criminal proceedings have already been convicted and sentenced to prison terms of up to four years or fines of up to 300,000 Algerian dinars (about 2,750 US dollars). Most are at liberty pending the outcome of their proceedings, and four are currently imprisoned.

On 21 June, six Ahmadis will appear before the Court of Appeals in Batna. They were convicted in first instance of administrating an unregistered association, collecting donations without a licence, and distributing foreign literature threatening national interest. They were sentenced to prison terms of between two and four years and fines of 300,000 Algerian dinars (about 2,750 US dollars) on 27 March. These have been the harshest sentences so far handed to Ahmadis for the peaceful exercise of their religion.

In May, the president of the Ahmadiyya community in Algeria was released after three months in pre-trial detention. He had been convicted on similar charges and received a one-year suspended prison sentence and a fine. Ten other defendants in the same case also received suspended prison terms ranging from three to six months in prison, and fines.

Over the past year Algerian public officials and press have made hateful or discriminatory comments about Ahmadis. In June 2016, The Minister of Religious Affairs and Endowments, Mohamed Aissa, described Ahmadi presence in Algeria as part of a “prepared sectarian invasion”. In February 2017, he stated that Ahmadis are “not Muslim.” In April 2017, Ahmed Ouyahia, President Abdelaziz Bouteflika’s chief of cabinet called on Algerians to “preserve the country from the Shia and Ahmadiyya sects”.

In a statement on 25 April the Minister of Religious Affairs and Endowments appeared to shift his tone emphasizing that the state “does not intend to combat members of the Ahmadiya sect” and is only enforcing laws on associations and the collection of donations.

However, Algeria has an obligation under Article 18 of the International Covenant on Civil and Political Rights to ensure the right to freedom of religion. Under international human rights law and standards, this includes the right to manifest that belief in collective worship, to build places of worship, and to collect voluntary financial contributions.

Algeria’s constitution does not fully guarantee freedom of religion, leaving the regulation of practice and places of worship to restrictive national legislation. National law has specific rules of worship for those considered to be non-Muslims, and collective religious worship outside the scope of what is regulated by the state is a criminal offence. Breaches such regulations, including provisions imposing the use of government-approved public places of worship, and advance notification for religious ceremonies, are punished with one to three years’ imprisonment, and fines between 100,000 and 300,000 Algerian dinars (about 900 and 2,700 US dollars).

“The right to worship collectively is a fundamental aspect of freedom of religion, it is as important as individual freedom of conscience. As long as every religious group, every place of worship is required to get an official seal of approval, there won’t be freedom of religion in Algeria,” Heba Morayef said.

The Ahmadis of Algeria: the government’s most convenient security threat?

Reuters (30.03.2017) – http://reut.rs/2nOdNew – A prominent member of Pakistan’s minority Ahmadi community and relative of its first Nobel Prize winner was gunned down on Thursday in an attack claimed by banned militant group Lashkar-e-Jhangvi.

Malik Saleem Latif, a cousin of Abdus Salam, who shared the physics prize in 1979, was shot just yards from his home in the town of Nankana, near Lahore in the southern province of Punjab, said Saleemuddin, a spokesman for the Ahmadi community.

Latif was riding his motor-bike to work with his son when a gunman opened fire, said Saleemuddin, who goes by only one name.

“Threats against Ahmadis are common in the area and Latif was a prominent member of the community and a well-known lawyer,” he added.

The Ahmadi community has been a target of mob violence and attacks since the government legislated the sect as non-Muslim in 1974.

“Saleem Latif was spreading Ahmadi beliefs in the region,” the militant group, Lashkar-e-Jhangvi, said in a statement claiming Thursday’s attack.

It was the latest in a series of sectarian incidents in Pakistan, where security forces have battled groups like Lashkar-e-Jhangvi for years.

“We have three teams investigating and searching for the assailants and trying to apprehend them,” district police officer Shahzada Billa Umer told Reuters.

Ahmadis are not allowed to call themselves Muslim or use Islamic symbols in their religious practices, a crime punishable under Pakistan’s blasphemy laws.

The laws also make propagation of Ahmadi beliefs an offence, with 494 Ahmadis accused in 1,335 such cases over the past 30 years, rights body Amnesty International has said in a report.

Salam, who was Pakistan’s only Nobel laureate until Malala Yousufzai shared the peace prize in 2014, remains a contentious figure because of his religious background.

Salam, who died in 1996, shared the Nobel Prize with Sheldon Glashow and Steven Weinberg for helping to pave the way to the discovery of the “God particle,” one of science’s greatest achievements in the last 100 years.