SYRIA: Towards an international alliance of governments to support persecuted Christians

– Hungary, Poland, Slovakia, Czech Republic, Russia and the USA are the first candidates 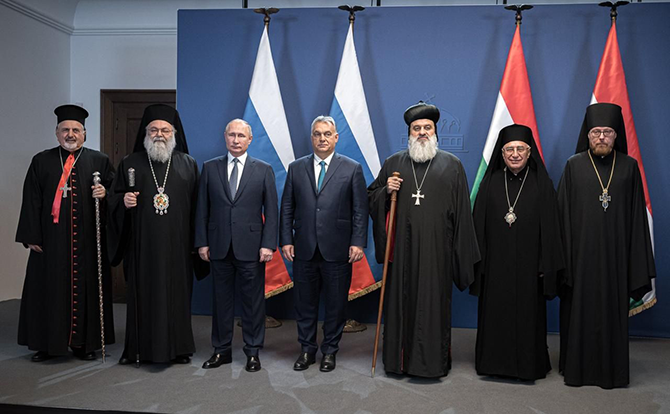 HRWF (02.11.2019) – At the end of October, Viktor Orban, Hungary’s Prime Minister, organized a conference to which he invited Russia’s President Putin and leaders of various Christian denominations from the Middle East to pave the way to an international alliance of European and other governments ready to prioritize support Christians in the Middle East and Africa persecuted by the Islamic State and other driving forces of political Islam.

A number of European governments – Hungary, Poland, Slovakia and the Czech Republic – are planning to join such an alliance. The Vatican is interested in these developments.

Building up on his political and military success in Syria, Putin is now finding new allies in Europe where he wants to appear as the sole protector of Christians in the Middle East.

Vatican News (01.11.2019) – Hungary wants to set up an international alliance of governments to support persecuted Christians in especially the Middle East, Africa, and other areas. The announcement came a day before Hungary’s Prime Minister Viktor Orban and Russian President Vladimir Putin were to discuss the issue in Budapest with Middle East church leaders.

Hungary’s state secretary, for the aid of persecuted Christians, Tristan Azbej, is worried. He told Vatican News that Christians are now the most persecuted people in the world.

That’s why, he says, Hungary wants to set up an international alliance to help Christian believers and other faith minorities during an upcoming conference next month. “We have an aim of collecting and mobilizing governments on one platform. That would coordinate its efforts to help the persecuted Christians of the Middle East, Africa, and also other minorities who are persecuted for their religion and belief,” he explained.

The Hungarian government is already coordinating efforts with the United States and Poland it seeks cooperation with other countries of Central and Eastern Europe such as the Czech Republic and Slovakia.

Hungary says the move is also aimed to help persecuted to stay in their own countries rather than emigrate to the West.

The country has spent tens of millions of dollars on humanitarian aid, including such as rebuilding hospitals, schools, and churches in war-torn Syria and other nations.

The aid was welcomed at a conference in Budapest Tuesday attended by crucial church leaders representing Catholic, Orthodox and other Christians in the Middle East.

Patriarch Ignatius Aphrem II of the Syriac Orthodox Church noted that Christians feel alone amid ongoing violence that even killed infants. “Many times, we feel we are abandoned as Christians of the Middle East. We feel that we have no friends. That nobody cares about us,” he said.

“We have seen throughout these years of war that countries and governments are most interested in their interests about imposing their ideas and their agendas. But they don’t want to really care about the people,” the patriarch stressed.

He cited plans by the United States to protect oilfields in Syria as examples of such alleged egocentric behavior.

The patriarch and other church leaders warned there is little time to prevent the extinction of Christian communities in the Middle East.

Most Christians have fled the troubled region amid attacks by Islamic State and other extremist groups.

After a meeting with Hungarian Prime Minister Viktor Orban on Wednesday, Putin expressed sorrow over the persecution experienced by Christians in the Middle East, according to the Associated Press. Russian leaders have worked to develop close ties with Syria’s Christian communities. Melkite Catholic Archbishop Jean-Clement Jeanbart has called Russia’s intervention in the country a source of “hope for the country’s Christians.”

At a meeting later in the day, Putin expressed concern for the “massive exodus of Christians from the Middle East.”

“We are watching what’s happening to the Christians in the Middle East with tears in our eyes,” said Putin.

Russia’s efforts to work closely with Syria’s Christians have also earned praise from Syrian President Bashar Assad, who called Putin “the sole defender of Christian civilization one can rely on.” Putin has propped up the Assad regime against his opponents in the country’s civil war.

And while many Syrian Christians are concerned about Assad and his Russian backers, they also fear that any new government would either be weak or filled with extremists.